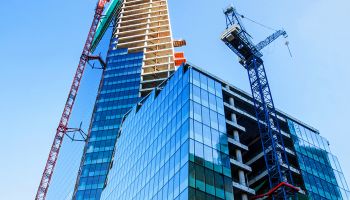 Construction sites, rife with risks from collapsing cranes to window blowouts, pose a challenge for lenders. But borrowers' insurance policies may provide some protection.

Construction accidents can cause major disruptions and delays, and may result in the need to refinance a project. Banks may incur sizeable losses in connection with such refinancings, including fees paid to attorneys and other professionals, and reduced or forgiven interest payments. Such losses are typically absorbed by the banks—but they might be recoverable under builders’ risk insurance that is issued for the project.

What to look for

Typically, mortgage holder’s interests in a construction project are protected under builders risk insurance policies, through additional insureds provisions, mortgage clauses, or both.

Similarly, a so-called “standard mortgage clause,” or a mortgage holder conditions clause, confers insured status upon lenders—and not merely the right to be first payee of policy proceeds, as is the case under an “open” mortgage clause.

The coverage afforded to mortgage holders is typically limited by the phrase “as their interests may appear” or “to the extent of their financial interest in the covered property.” These provisions are commonly understood to merely allow the bank to recover for the loss that would otherwise be payable to the developer.

But let’s look at something that goes further.

Protection beyond the developer’s

Some policies can reasonably be interpreted as providing far broader coverage to banks and other lenders. The mortgage holder provisions of some policies provide that if the claim of the developer is denied for certain reasons, then all of the terms of the policy apply directly to the mortgage holder.

The most commonly recognized benefit of such clauses is that the lender is able to assert its own claim to recover the loss suffered by a developer whose claim has been denied on such grounds as failure to pay premiums or late notice of a loss.

There may be another extremely valuable feature of such clauses, though. They may allow lenders to recover their own soft costs as a result of the loss.

Likewise, policies that confer “insured” status upon banks and other lenders “as their interests may appear” can be understood, in the absence of any limiting language, to provide banks the full scope of coverage afforded under the policy for categories of loss that are actually suffered by them, such as costs incurred in connection with a refinancing associated with the loss. Those types of costs are often included in the policy’s “soft costs” coverage.

Many builders’ risk policies provide coverage for certain listed soft costs incurred during the period of delay caused by a covered cause of loss, such as “interest on money borrowed to finance construction”; costs “resulting from the renegotiation of construction loans”; and “real estate taxes and assessments.”

That coverage is generally understood to be afforded only to the first named insured—typically the developer—for its increased costs resulting from a construction accident or other covered loss.

However, lenders often incur such soft costs as well, and some policies can reasonably be interpreted as providing them with that coverage.

For example, a policy which lists the mortgage holders as “named insureds” or even “additional insureds” gives them the same rights as the first named insured except to the extent specifically and expressly limited by the policy. Therefore, unless the coverage granted for soft costs is specifically limited, it should apply to all insureds under the policy, including lenders.

Indeed, the costs resulting from the renegotiation of construction loans are incurred by both sides of the financing transaction. Likewise, interest on money borrowed can be a loss to lenders to the extent that interest payments are not made. Significantly, many soft costs provisions do not state that the coverage is afforded only to the developer.

While there is scant case law addressing whether lenders can recover their soft costs, the term which often defines their  rights under a policy—“as their interests appear”—can reasonably be interpreted to include such costs.

But what about the bigger picture?

The interests of lenders in the construction project are not only in the principal amount they have loaned, but also in the anticipated profits from the transaction. Protection against lost profits is found in various coverages under a builder’s risk policy, including business interruption/delay in opening, extra expense and soft costs coverages.

So, there is no reason why the policies should not be construed to provide such coverage to lenders. That is at least one reasonable interpretation of many policy forms, and therefore it should be applied, either as the plain meaning of the contract or to resolve any ambiguity.

Investigate before you count on coverage

There can be significant differences in the coverage afforded under builders’ risk policies, so the argument that banks are entitled to recover their refinancing costs as soft costs will not always be available. The policies should be reviewed carefully to determine whether a valid basis exists for such a claim.

Also, as a general rule a lender’s coverage, no matter how broad or limited it may be, is only provided for losses resulting from a covered cause of loss, subject to the exclusions in the policy.

Therefore, there will be no coverage for soft costs or any other losses suffered by the lender which result from an excluded cause of loss. As mentioned above, many policies allow the mortgage holder to assert a claim that has been denied to the developer, but only if the basis of the denial is failure to comply with a condition to coverage, and not when the developer’s claim would not have been covered even if all of the conditions had been complied with.

When a major disruption to a construction project results in a refinancing, banks should carefully examine the builders risk coverage. They may find more coverage than they expected.

Finley Harckham is a shareholder in the New York office of the law firm of Anderson Kill P.C.  He regularly represents corporate insurance policyholder in insurance coverage matters, including arbitrations and litigations. He can be reached at [email protected]