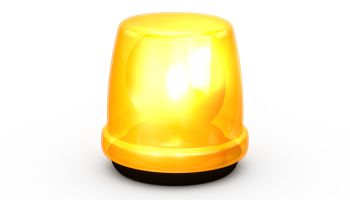 We hear the question of how the U.S. is doing economically as a byproduct of the presidential election rhetoric. This time of the year, it’s hard not to attribute some political intent, content, or spin to just about any item of news relating to national economic data.

The rhetoric between the two principal campaigns differs, yet sufficient urgency on the question displays itself to suggest that some Americans are growing nervous. In the big picture sense there’s concern about stagnant wages, economic growth at less than traditional rates, and a host of issues that don’t necessarily impact bankers on a day-to-day level.

So, those signs remain nonspecific. But there are also plenty of “numbers” (corporate earnings of public companies, economic data on trade, GDP, and such) that give us useful information about our local and regional conditions.

It seems to me that in terms of the signals they are giving, the lights are “flashing yellow.”

We are already in the second-longest economic “boom” of the post-World War II era. Interest rates are at all-time lows for virtually our entire economic history. Further stimulus in the form of lower rates or additional quantitative easing seems to have no appreciable effect.

GDP growth so far this year has been at half the rate enjoyed in several other economic cycles over the past 70 years. Other signals that are widely interpreted as having short- to intermediate-term predictive value, such as car sales and housing starts, especially starter housing, are showing signs of faltering or slowing.

The political spin becomes particularly evident in the very recent report, “The Performance Of Community Banks Over Time,” of the Council on Economic Advisors” that the Dodd-Frank Act has not had an appreciably negative effect on community banks and banking. Bankers have responded—both vigorously and angrily—at what is seen as a large and growing problem that’s been relegated into oblivion by political myopia or intellectual dishonesty.  [ABA reaction. ICBA reaction.]

There have been reports, widely scattered perhaps but persistent, that lenders are shaving loan terms to capture available new lending opportunities. Such concessionary terms are impacting amortization schedules, personal guaranties of principals, and covenant protection designed to lessen risk to the lender.

Such behavior is a standard reaction by bankers. But when it is prevalent at a certain point in the business cycle, as it seems to be today, it can be problematic.

It’s only been eight years since the start of the worst economic recession and trough in banking activity in 2008. To many of us, it seems that we have only partially recovered from the worst period in recent memory.

Yet the Comptroller of the Currency has for several quarters continued to cite concerns on commercial real estate lending exposures and concentrations. There seems no overt level of concern centered within the banks themselves or industry chatter that we are approaching an inflection point.

Are we turning a blind eye? Or is the current concern heard from certain quarters overblown?

Economic cycles occur frequently enough that most lenders have experienced both good times and bad times relative to generating and maintaining an acceptable level of credit quality.

Yet we bankers, as a group, suffer from occasionally severe cases of selective amnesia.

These bouts incidentally tend to manifest themselves in the latter phases of business cycles and such outbreaks occur in banks where management tries to continue to run a “bull market bank” in the face of mounting evidence of a bear market for credit.

Most borrowers, especially small- to medium-sized business owners, have voracious appetites for credit. I think they are like puppies, that have no sense of when they may have eaten too much. So it’s easy for them to consume to the point of significant indigestion.

Bankers, specifically the lenders, are supposed to provide the balance to modulate—and moderate—the tendency to over-borrow.

There is accumulating evidence that we have peaked for this economic cycle. A collapse is neither imminent nor likely. But it’s time for a breather just the same.

And our government in the heat of a robust political cycle seems intent on waging a war of disinformation on the actual condition of our economy and of our banking system.

I won’t try to convince anyone with statistics. Rather, just ask yourselves how you think we’re doing as an economy and as an industry.

Ask your customers “How’s business?”—and pay attention to their responses.

Time for a wakeup call

And here are a few wake up statistics from a very recent article in The Wall Street Journal.

A form of HELOC, widely offered beginning in 2006, provided interest-only loans for 10 years and then a resetting of terms to 15 or 20-year amortization periods. The article reports that $840 million HELOCs were taken out in 2006 and that about 40,000 of these are resetting this year. An estimated one million of additional loans originated in 2017 will reset next year.

The article noted that a contractual rate of interest of 4.5% produces an interest-only payment of $376 per month but with a 20-year amortization of principal, the monthly amount rises to $632.

In most ways the industry is in decent shape. Capital is much stronger industrywide than it was ten years ago and much of the “silliness” has been run out of the marketplace.

But we suffer chronic and recurring bouts of selective amnesia. And we often support our customers beyond the point of reason, abdicating our conservative role in the evaluation of creditworthiness and capacity to repay.

Do we really have a clear idea of the possible hazards we may face next year?

Are we even thinking about it?

More in this category: « How community fundraising dovetails with banking Spin is making us dizzy »
back to top