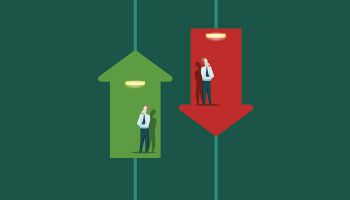 It was only three years ago that GE Capital, the financial services subsidiary of General Electric, was a “systemically important financial institution” (SIFI). Today, little remains on GE’s balance sheet of what had been a half trillion-dollar total assets financial services enterprise.

The recent history of GE’s financial performance is an amazing story of hubris, flawed strategies, and a very public humbling of a corporate icon. What makes the story so interesting to me at least is the sheer scale of what occurred.

Bad timing for an aggressive conglomerate

The other day there was a front page Wall Street Journal story about GE and how its recently retired CEO, Jeff Immelt, had run the company with bluff and bluster centered on earnings expectations and performance that are no longer achievable. Immelt’s long tenure of 18 years in the top job ended badly for the company. The company’s dividend was chopped in half last year and the price of the stock dropped from $30 a share to about $14 in eight months. Securities analysts say that at even at its current price, it’s not cheap.

Thinking back to my early days as a junior officer on The Bank of New York’s corporate lending platform, I learned that conglomerates were supposed to shield shareholders from the risks of volatile earnings by having multiple product line income streams that would be capable of buffering each other.

Unfortunately, what we are periodically reminded of is that you can’t have generous portions of both diversified earnings and growth. You have to choose.

One thought I’ve had rather consistently about General Electric is how unlucky the company was in the timing of certain business events:

• There’s the matter of being a huge and stellar performer in financial services and then being clobbered by the worst economic disaster to impact our economy since the Great Depression.

• This was followed by the heavy hand of regulation, principally Dodd-Frank, and it’s no wonder GE’s board aggressively shed major portions of its financial services business to substantially lighten that particular regulatory burden.

• The company also has been an enthusiastic practitioner of “financial engineering.” It aggressively purchased its common shares at market to reduce the number of shares outstanding and thereby improve, arithmetically, the resulting earnings per share. The problem was that the stock buybacks were largely accomplished at prices more than double the current price of GE’s common. In hindsight, how many tens of millions of dollars were simply wasted in that exercise?

• When GE was expanding its presence in domestic oil and gas production, no one foresaw the imminent collapse of the economics of oil and gas exploration and production. Oil prices went from a high of approximately $107 per barrel (West Texas Intermediate) in the summer of 2014 to a low of nearly $25 per barrel in early 2016. That business will ultimately recover, but the company received another black eye for its unfortunate timing.

• In 2014 the company announced the acquisition of Alstom, a French company that is a major manufacturer of power generating equipment. This was a significant expansion of its power equipment manufacturing business line. In hindsight the company paid too much for Alstom due to the political realities of poor wage productivity in France. This story was thoroughly chronicled in the financial press as GE was virtually held hostage to French domestic politics.

A question of “style”

Any management can have a run of bad luck. The collapse of oil and gas prices and the economic recession starting in 2008 that devastated the financial services sector surely fit into that category.

But there’s also the matter of Immelt’s “style.”

Bank lending officers are optimistic people by nature. We are usually avid promoters of our banks and of our customers within our banks. Immelt, too, was aggressive in his projections and his view of GE’s business prospects. He’s paid to be and what Fortune 100 CEO is anything but his company’s best “front man”?

For decades, GE has been a hard-charging environment where opportunities always seemed to eclipse problems. In fact, the company’s earnings per share “guidance” was $2 a share, well into 2017. Now that is expected to be about half of that amount for 2017.

Jack Welch, Jeff Immelt’s immediate predecessor, was a legendary figure in American business. During his 20-year run as CEO, GE was able to show a relentless growth in period-to-period earnings. To be sure, these results were largely managed in an environment that I can only characterize generally as “pre-Enron.” It would be difficult to match that same performance today in what is now a very different accounting and governance environment. Yet such is the long reach of corporate culture.

We are occasionally reminded that certain fiscal laws remain fixed. What goes up can come down. Good luck can turn sour. And concentrations of size of market share can look very different in a declining macro business environment than in the early phases of a new business cycle.

What can be learned here

One more significant “indignity” now seems possible. GE is the only company still included in the Dow Jones Industrial Averages, where it was one of the 12 original companies at the index’s formation in 1896. Rumors abound that the company will be kicked out of the Dow.

What we bankers need to see in GE’s current malaise is how even the icons can crumble and totter.

We are likely nearing the end of a very long business cycle. There will be surprises to be discovered in our own loan portfolios. They won’t be of the scale of GE’s difficulties. But they may be disconcerting enough to those of us with large corporate lending portfolios.

It’s time to trim up the bank’s exception lists and not be inattentive to the details in reported financial results during the next few quarters.

More in this category: « Weekend Think: “We live here too” Have we lost interest in community banking? »
back to top