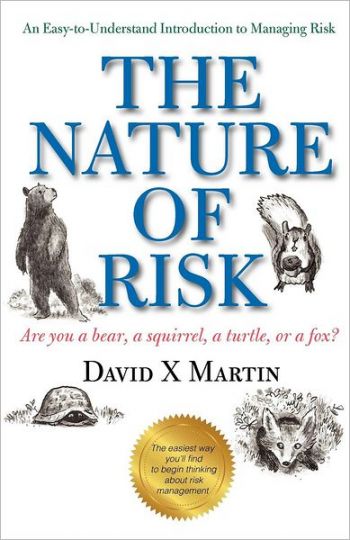 The Nature of Risk: Are you a bear, a squirrel, a turtle, or a fox? By David X. Martin. CreateSpace Independent Publishing Platform. 86 pp.

The singer of the infamous Dr. Dolittle song of years ago longs to "talk to the animals" to learn the animal ways. Instead of talking to animals, how about a book to learn risk management from the animals?

It has nothing to do with Dr. Dolittle, but David X. Martin's short book The Nature of Risk takes the reader on a visit to an imaginary forest to learn the animals' methods of planning for and reacting to different levels of risk.

The book's subtitle asks: "Are you a bear, a squirrel, a turtle, or a fox?"

And this gives a taste of what you'll be in for if you pick up Martin's amusing and instructive work. Martin is now a senior advisor at Oliver Wyman, and before that served in posts at AllianceBernstein LP--including an eight-year tenure there as chief risk officer.  Earlier experience included nine years in risk management at Citibank.

Martin's book is a fable, but one that easily shows different methods for handling and planning for risk (or the lack thereof) and how each level of risk management is played out during times of crisis. In The Nature of Risk the crisis comes in the form of a brush fire, and then a major forest fire.

Martin injects humor at various places in the book. His author's note at the beginning not only provides a chuckle before reading, and for contemplating after the story is over, but was piqued my curiosity to quickly join the forest animals as they deal with risk.

The note says, in part:

"While no animals were intentionally harmed in the telling of this story, a number of them will be unavailable for the sequel."

There was an immediate anticipation of drama and humor in the upcoming story!

The illustrations are similar to those found in a child's book of fables and provide a very nice point of reference at times.

To each his own methodology

As the story plays out, the reader sees each animal doing what that particular animal does...

• The squirrel hoards nuts in trees.

• The rabbit runs around.

• The bear looks for food.

All just as each particular critter is prone to do.

It is how these characters relate to each other and to their environment that teaches the lessons of preparation for whatever crisis may come.

Each thinks they are doing what they should do and are somewhat unwilling to change because they have always done things this way.

The first crisis--the brush fire--does serious damage. Yet many of the animals are able to survive with little or no harm.

Once they are past this problem, a sense of well-being takes over and the potential problems that could have happened are soon forgotten. Most of the animals return to their day-to-day activities with little or no thought of the catastrophe that could have easily consumed them.

And yet some in the forest did not survive the first crisis, an example of the poorest planning coupled with being in the wrong place at that wrong time.

The second and more serious crisis--the forest fire--affects all the animals.

Many do not survive because of attitude, ego, the inability to learn from the past, and panic.

Others do survive but lose virtually everything--all their assets, food and shelter, due to lack of planning or poor decisions.

As the story relates the devastation that occurs in the forest fire, the tragedy is genuinely felt. It is good at times to know that this is only a fable.

Day after the worst--and lessons to learn

Once the major crisis has passed, the survivors begin again.

I especially enjoyed the story of the beavers. Due to a disagreement, the beavers parted company after the brush fire. Some in the group started a new dam to provide food and shelter, while others stayed at a location that had limited resources. After the forest fire, those that stayed lost their home but as they looked for a new place, they found the group that had started anew before the forest fire. The adventurous group had planned well.

Here is a lesson of being able to objectively look at current situations to determine if continuing in a particular way will be the best decision.

However my favorite part of the beavers' story was the reaction from those that chose to leave earlier: They did not chastise or ridicule the group that did not leave the old ways and then lost their home. Instead, they welcomed the refugees, and all worked together to make the new home even better.

In my career, I have seen many wrong decisions made. Often, however, the event is not turned into a learning experience but is instead one of mockery and shame.

We can learn from the animals.

The final chapters of the book give a thorough examination and analysis of each animal's reaction.

As noted, Martin is an internationally recognized expert on risk management. It is apparent he very clearly understands risk management in various areas of investments, business management, and life in general.

As the author reviewed the stories of each of the animals, I felt a bit uneasy as I saw myself in several of the animals that were less than successful in their planning skills. This book provides much insight in a very easy learning process. The summary chapters at the end provide a clear view of how we should approach many aspects of our lives and work.

I sincerely enjoyed this book of 86 pages. A lot of practical knowledge is provided in a very short yet entertaining read.

“What’s the hurry? Are you blind, squirrel? There are coyotes and foxes everywhere, and hawks, too,”said the rabbit, glancing nervously up into the sky. “If you don’t keep moving, something’ll be on your trail before you know it.” The red squirrel yawned. “So what? That doesn’t mean you have to run around until you collapse, does it? Can’t you just find yourself a nice safe place to hang out? You know, so you wouldn’t have to worry every minute of your life.” The rabbit cleaned his whiskers with his forepaws. “I can’t take that risk, squirrel.” —David X. Martin