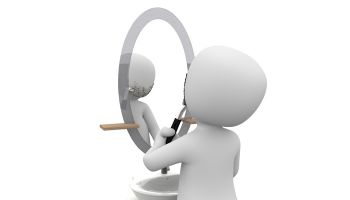 It’s no accident that Character stands at the top of the list of the Five Cs of Credit.

All lenders know that, both as a part of their formal training and their intuitive experience in assessing the  “worthiness” of all borrowers.

Stephen Covey in his best-selling book The Speed of Trust of a few seasons ago makes the compelling point that virtually all of business works on trust. Trust is the glue that fuses human relationships and facilitates all human interactions. The word has many synonyms—confidence, faith, and reliance come most quickly to mind.

Without trust, how could we accept anyone’s word?  How would business be done in a modern economic society without it?

This presidential election campaign is once again teaching all of us, not just the bankers, the importance of character in our personal relationships. Will people do as they say?  Do they mean what they say?  Can we trust them?

Hillary Clinton has been in the public eye for years and most of today’s voters are old enough to remember her over all the years of her public life. Cumulatively therefore we have enough information to make an informed judgment on her worthiness both to her experience and her character.

As a banker viewing the candidacy of Donald Trump, I marvel at how extensively he’s been vetted through the lending and collection cycles over an adult lifetime of deal making. That’s not to say that the general public is necessarily well informed as to the details for a comprehensive conclusion. But it seems to me that he’s convinced enough bankers to lend him enough money to be reliable in terms of his character. That makes it hard to imagine the man might be unworthy of high office in the character sense, as most bankers would use the term.

Yet, I was surprised the other day to learn that many lenders are skeptical of Donald Trump. He has the reputation of being a tough negotiator (a “pain” to deal with) and he’s quick to sue. Perhaps there could be some surprises after all.

There are some potentially important lessons for bankers in this current battle of words and political advertising:

• Do these assaults on the character of the candidates contain lessons or warnings for bankers? The specific question that occurs to me is what does all of this say about the current environment, the C of Credit representing Conditions?

• What does this tell us about the state of business and our views generally on the reliability of interpersonal relationships? Could this cast a negative pall over business nationally and even internationally? Could this contribute to a recessionary mentality?

I’m sufficiently concerned about this possibility to think that maybe there are some affirmative steps we should consider in anticipation of a souring national mood in both our politics and our economy in coming months. Here are some preliminary thoughts. What do you think?

There are signs that this business cycle is becoming “long in the tooth.”

We are certainly in a mature phase of the recovery. Some classic signs have started showing that we are getting a little “careless” with our underwriting.

Are you seeing a pattern of increasing numbers of credit and collateral exceptions compared to your bank’s multi-year experience to successfully land new business?   Is the policy up to date in all material respects, such as advance ratios on collateral, trade area definition, and due diligence activities for both new and outstanding credit?

Has management and the board addressed all the formal comments, especially those “matters requiring board attention?”

The answer is very likely yes. But then think about the comments made to you orally during the last exam that never made it into the report. Have these been addressed?

Do some loose ends come to mind?

There was a flurry of activity surrounding conflicts of interest, either actually or the appearance of them, that seems to have faded from the news recently.

Have you looked at your policy lately and updated your definition of conflict of interest in light of national business news and known best practices?

Are your internal auditors carefully screening for violations or laxness?

The bottom line question is whether your internal controls in all areas of the bank continue to function as they need to? Are you confident that this is the objective reality?

These are important statements of principle, though more than a few managements and employees consider them to be just “feel good” pronouncements. Those who think in that fashion most likely represent those workplaces where the words don’t always match the actions.

CFPB has been at its work long enough dealing with customer complaints and allegations running the gamut from major to minor that any candid conversation with officials of that agency would confirm the need for a thorough “gap” analysis—and remedial activity—at many institutions.

The banker in the mirror

We bankers emphasize character as the most important trait of our borrowers. Yet do we hold ourselves to similarly strict standards of behaviors?  Are these clearly set out in our lending policies and our mission/vision/values statements?

A lack of congruence between what we say and our actual deeds can quickly undo all good intentions, positive advertising, and goodwill efforts.

Our industry has been under an ethical pall for several years, enduring assaults on our reputation that most of us do not deserve.

And that has seeped into the presidential campaign, for example, with Sen. Sanders’ statement that the business plan of banks is fraud.

I sense that the external environment (think: Conditions) will not improve in the near term and it’s more than just where this economy is in the current business cycle.

There may be some things we can do now to minimize any damage. We should begin promptly.

More in this category: « 3 ways rate tug of war differs today Who will you hire next? »
back to top