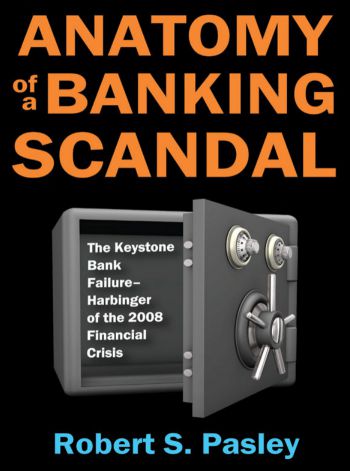 Excerpted from Anatomy Of A Banking Scandal: The Keystone Bank Failure—Harbinger Of The 2008 Financial Crisis. By Robert S. Pasley. Transaction Publishers. 336 pp.

This excerpt from Anatomy Of A Bank Scandal is a companion to our book review.

The following excerpt comes from a true story about a bank—First National Bank of Keystone, West Via.—that failed in 1999 due to its misbegotten involvement in the securitization of subprime mortgages—which, according to the official study of the 2008 financial crisis, was the “spark” that “lit and spread the flame of contagion and crisis.”

The bank engaged in 19 subprime securitization deals, and was unsuccessful in every one. In order to hide its losses from the bank examiners, as well as its own board of directors, its outside attorneys and its outside accountants, bank management falsified reports and—as shown in this short excerpt—even buried bank documents on a mountain ranch outside of town in the middle of an examination.

The falsification of bank records was so extreme that the bank was reportedly the most profitable large community bank in the entire country at a time, when it was actually insolvent.

My book examines the unusual characters in the bank who engaged in this fraud (and who also embezzled money from the bank and stole from each other), as well as the conduct of the regulatory agencies, the bank’s outside law firm, and the accounting firm that the bank retained at the insistence of the regulators to review its books and records.

The book also explores the events that led up to the bank’s failure, the bank’s efforts to intimidate the regulators and to keep them at bay, and the ensuing criminal prosecutions and civil lawsuits.

The story of the Keystone bank provides many lessons about the seeds of the financial crisis, as well as what the country could do going forward to prevent other financial crisis.—Robert Pasley, author, Anatomy Of A Bank Scandal

The following is reproduced with permission of the book’s publishers. © Transaction Publishers 2016. The book is available in print and in electronic form.

Oh, what a tangled web we weave,

When first we practice to deceive.

The bank examiners had just left the tiny town of Keystone, West Virginia, for a long weekend. They had been examining the only bank in town—the First National Bank of Keystone—since June 21, 1999, and the process had become more and more contentious.

After the examiners left, Terry Church, the head of the bank, called Bill Miles, an employee at her ranch outside of town. She wanted him and the other men at the ranch to dig a hole large enough to hold two truckloads of bank documents. Miles asked, “Aren’t we going to burn the documents?” But Church responded: “There is not enough time, and there are too many to burn.”

Church directed Miles to have some men dig the hole and to send the “TopKick”—a GMC truck that could hold approximately fifteen tons of gravel—down to the abandoned schoolhouse where the bank stored some of its documents. The TopKick had never been used to move bank documents, but this day was going to be different.

T. G. Church, a distant relative of Terry Church’s husband, drove the TopKick down to the schoolhouse. When he got there, he backed the TopKick up to the front of the schoolhouse, positioning the truck right under a third floor window. Then, senior bank officers and a crew of men started throwing bank documents out of the window onto the flatbed of the truck. There was no effort to keep the boxes of bank records intact as they hit the truck. As T. G. later recounted, “They just throwed them out the window.”

When the TopKick was finally loaded, T. G. drove it back up Burke Mountain to Terry Church’s C&H Ranch. He then got the track loader—a huge caterpillar, but with tracks instead of wheels—and proceeded to dig a ditch a hundred feet long, thirty feet wide, and ten feet deep. He sloped the ditch at one end so he could back the TopKick all the way down into the hole. After dumping the truckload, he drove back into town to pick up a second full load of documents from the schoolhouse.

Meanwhile, Warren Johnson, another employee of Terry Church’s, had taken the “One Ton” truck (which actually could hold several tons of gravel) to the neighboring town of Kimball to pick up even more documents. These documents were from a house recently purchased by Ms. Billie Cherry, the chairman of the board of the bank, from the estate of the late Dr. Fickins. The house needed cleaning out, and the fact that the doctor’s old papers were thrown out along with the bank documents would later be used to argue that the removal and burial of all of the documents was simply done in the normal course of affairs.

After Johnson dumped his truckload into the hole that T. G. had dug, he returned to town, parked the One Ton at the hardware store, which was right next to the bank, and walked the three and a half blocks up the steep hill to the schoolhouse. Once the TopKick was loaded for the second time, Johnson and T. G. drove it back to the ranch. When they got there, they learned that Church had called Miles a second time. She wanted someone to drive back into town and pick up the One Ton—which was being loaded with still more documents at the bank. So T. G. left the TopKick for Johnson to dump, and drove to the bank in another vehicle.

Graham, a bank officer and operating head of the bank’s thriving mortgage securitization subsidiary, had driven the One Ton from the hardware store, across the parking lot, to the bank, and had positioned the truck under a balcony at the bank. He had Scott Sizemore, a hardware store employee, help him throw bank documents off the balcony onto the back of the One Ton. Sizemore had never done this before, so he asked Graham why they were doing it. Graham said that the bank could destroy documents after two years. The minimum retention period for bank documents, however, is actually five years, and, further, this bank had been placed under a specific directive—from its federal banking regulator, the Office of the Comptroller of the Currency (OCC)—to suspend all document destruction.

T. G. picked up the One Ton’s second load (the fourth truckload of the day) and drove it back to the ranch; it was about 5:30 pm. Because it was late, the men were thinking they could wait until the next day to dump this last load and cover up the documents. However, Church called Miles a third time and said, “No, cover it today.” So the men dumped the load, filled the hole with dirt and smoothed it out. Later on, they seeded the area to make it look like it had never been disturbed.

Doug Penny had just returned from work on the Churches’ boat marina in Bristol, Tennessee, and was visiting Miles on the ranch. It was shortly after lunch when the message came through that Church needed them to dig a second hole and bury more documents.

This time, the material to be buried included microfilm. Penny, who knew Church from childhood and who was the co-manager of her ranch, dug a hole next to the much larger first hole and, with Church’s help, threw the bags in. He then “tracked them in” by adding dirt and “smoothed her up real good.” He then seeded the area.

Afterward, they talked about the possibility of digging up some other areas of the ranch and seeding them so that “it wouldn’t be like just one area was disturbed.” But they never got around to doing that.

When the bank examiners returned from the weekend, they did not realize that the bank documents and microfilm were missing. But, during the next two weeks, they discovered that half of the bank’s assets were missing.

Due to this discovery, the OCC closed the bank early in the morning and handed it over to the Federal Deposit Insurance Corporation (FDIC) as receiver.

The First National Bank of Keystone was chartered in 1903 and had survived the Great Depression. To reflect this accomplishment, the bank had its motto, “Time Tried—Panic Tested,” engraved on the side of the bank. But the bank could not survive the senior management’s embezzlement and fraud, and the bank’s extensive operating losses that had—up to that time—been hidden from the examiners.

Based on a tip, law enforcement executed the search warrant with twenty-seven agents from five different agencies. They brought a ground-penetrating radar device that would determine where the ground had been disturbed and where it was not as compact as it should have been. They also brought a backhoe to dig up the documents.

After using the radar device for over an hour—even with the benefit of having seen the land the day before from the helicopter—the FBI was getting nowhere. They could not find where the documents were supposedly buried. The backhoe operator, though, who had been sitting on his backhoe and chewing tobacco, called out to the FBI agents, asking them whether they were looking for where the ground had been dug up.

They said they were. The operator, a local man who had more experience in digging than the agents evidently did, said, “It’s right over there.”

Joe Ciccarelli, the supervising agent on the scene, told the agents using the radar to get out of the way and let the backhoe do its work. On the first try, the backhoe operator came up with buried bank documents. The agents then took over with hand shovels—in order not to harm the documents—and proceeded to dig up the entire area.

The first area they uncovered held most of the microfilm, and they later found the larger burial area that contained hundreds of account records, ledgers, and other bank documents. There was so much buried that law enforcement officials had to send out for more boxes from U-Haul, Wal-Mart, and Lowes in Bluefield and Princeton, twenty-two and twenty-seven miles away, respectively. They also obtained some additional boxes from a dumpster owned by the bank itself. As it got dark, they still had not finished and had to secure the property in order to come back the following day and complete the excavation.

In all, they carried away 469 boxes of paper documents, as well as bank proof tapes and microfilm as recent as June 30, 1999—just sixty days before the bank failed. In the annals of bank failures, this was unprecedented.

Read the review, "What happened at 'the bank with the backhoe'"

More in this category: « What happened at “the bank with the backhoe” Should we eliminate paper money to fight crime? »
back to top