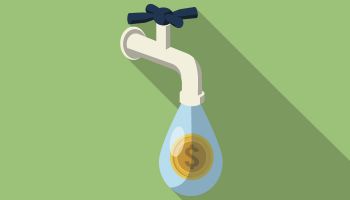 Interest rates have historically had little impact on home prices, meaning the purchase market might not be affected as much as refinancing activity.

SNL data shows mortgage rates for 30-year fixed-rate mortgages jumped 38 basis points between Nov. 11 and Dec. 9. Rates on 15-year mortgages showed a similar spike. Among the 20 largest banks that provide no-fee mortgage rates, M&T Bank Corp. stands out with a 3.63% mortgage rate. With large banks such as JPMorgan Chase & Co. and Wells Fargo & Co. above 4.25%, the superregional could win some share, especially in the refinancing market.

Further upward pressure on rates could come this week as the Federal Open Market Committee meets Dec. 13 and Dec. 14. Future markets have put a 95% probability that the committee hikes the federal funds rate by 25 basis points.

"The housing market is going to respond to the strength of the broader economy. So if you're in a rising-rate environment where there's strong economic growth and wages are rising, all those are going to contribute to a stronger housing market," said Michael Fratantoni, chief economist for the Mortgage Bankers Association, or MBA. 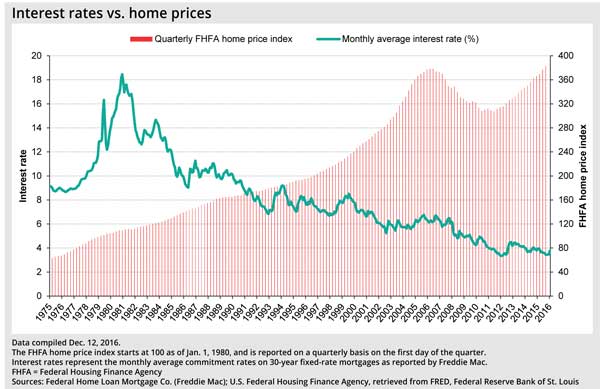 Black Knight Financial Services calculates how many borrowers could save money by refinancing. The company reported Dec. 12 that the population of refinance-able borrowers has shrunk by 5 million borrowers since the beginning of November.

Researchers at Urban Institute came to a similar conclusion. On Dec. 12, the think tank's Housing Finance Policy Center reported that less than 20% of outstanding mortgages would benefit from a refinance, down from almost 50% earlier in the year. The analysts wrote that the spike in rates will lead to "significantly fewer mortgages." 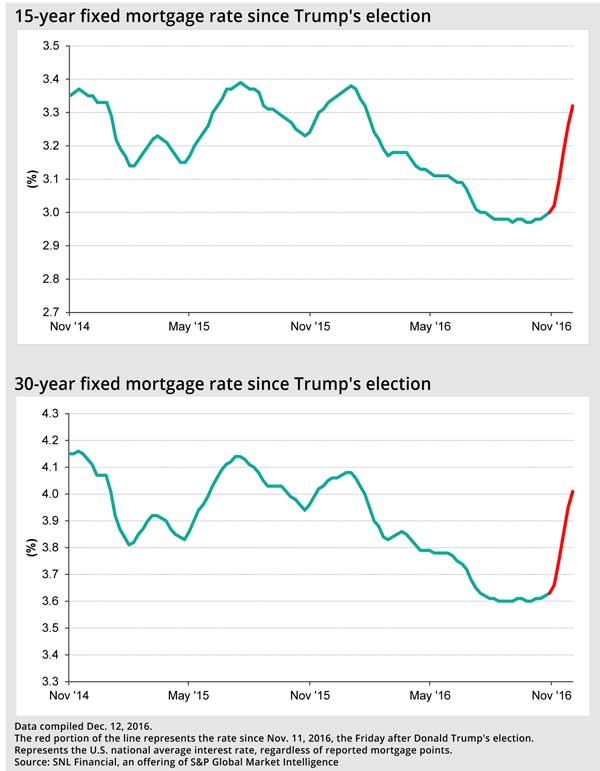 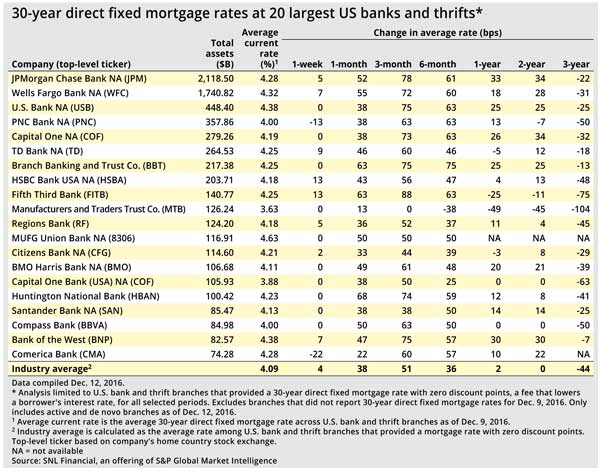 "The effect [of higher rates] on refinance activity is immediate and direct. For many, it reduces the benefit of refinancing," said Frank Nothaft, chief economist for CoreLogic. He said CoreLogic expects refinancing activity to decline by one-third to one-half in 2017 relative to 2016 volumes.

Historically, mortgage rates have had little effect on home prices and purchase activity. Rates spiked in the 1980s, reaching a peak of more than 18% in 1981. But home prices did not suffer, continuing to grow through the period of hyperinflation.

Urban Institute's analysts predict higher home prices in the rising-rate environment, buoyed by many of the inflationary pressures that are pushing up rates.

"We have a glass-half-full perspective because the rising-rate environment means the American consumers' financial picture is improving," said Ben Graboske, an executive vice-president for Black Knight.

And CoreLogic's Nothaft said the bump in rates could actually increase home sales as buyers who had been "on the fence" feel a need to take advantage before rates move even higher. But Nothaft said higher rates will have a small negative effect on home sales by the summer of 2017, potentially offset by income and job growth.

There could be offsets in refinancing volume, too. While there are millions of borrowers who no longer save money with a refinancing, some will continue to see value.

Nothaft pointed to borrowers with loans insured by the Federal Housing Administration, which require expensive insurance premiums. Once a borrower earns enough equity, a refinance into a higher-rate mortgage can make sense since the insurance premium disappears.

And Black Knight's Graboske noted that a certain percentage of borrowers will continue to pursue cash-out refinances to finance renovation projects or other needs.

As for the trajectory of rates following the FOMC's decision Wednesday, Graboske said the market has likely already priced in a 25-basis-point increase. [Editor’s note: This was the increase made by the Fed.] Nothaft agreed, saying mortgage rates are unlikely to react to the expected uptick in the fed funds rate.

Both analysts said the job market and related inflationary pressures on incomes will play a larger role on mortgage rates. MBA's Fratantoni highlighted those factors, as well as tightening monetary policy abroad. The European Central Bank recently announced a pullback in its quantitative easing program.

"A weak global economy and lower rates outside of the U.S. … [have] been an anchor on U.S. rates until now," Fratantoni said. "And that anchor is slipping."