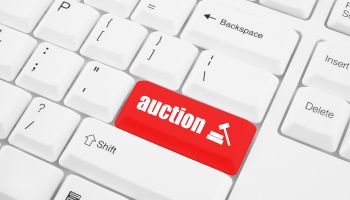 Who would have thought that an online auction would be the tool to use in disposing of Other Real Estate Owned (OREO)? What I’m about to tell you is a true story about a bank in a crunch with OREO.

After all, if Craigslist is replacing the American garage sale, why can’t the web be used to sell repossessed real estate?

Logic would dictate that this is possible, but the perception of selling price seems outside of what the web can bear:

Under a virtual hammer

Here’s the story. The institution listed the property with a local auction service that also had an online auction capability. Management listed the home with an upset price of $77,000, which included the loan amount, legal fees, and miscellaneous costs. The end date and time for the auction were posted along with the property information and pictures. From there, the financial institution held out hope that it would break even and dodge the REO charge-off, thereby avoiding further pain.

Now it gets interesting. At the end of the auction, the analysis of the event was nothing short of astounding:

• Bids during the last 30 minutes of the auction were frenetic.

That’s right—almost twice what management had been hoping for. And, yes, the transaction did close. Yep, done and done!

The proceeds, after all costs, were given to a local charity, but what an amazing experience. That is not to say that every deal will go like this, but it is a statement that the intersection of the internet and banking means more than just a website, an online application, and a debit card!

It is a lot more than that. Go figure!

Thinking beyond the usual

When I interviewed the financial institution, management admitted that apprehension about this medium and the potential experience were top of mind, but they felt compelled to give this approach a try.

It was viewed as an innovation opportunity to leap over the status quo and try a new and contemporary approach as a 21st century solution. It worked!

Furthermore, a potentially significant charge-off was transformed into a conceptual leap forward. The fuel for such an opportunity; a visionary leadership team that challenges traditional thinking and encourages innovation.

Truly an exciting place to be if you worked at that financial institution!

More in this category: « What if air traffic controllers ran a bank? Tokens … they’re uber important! »
back to top