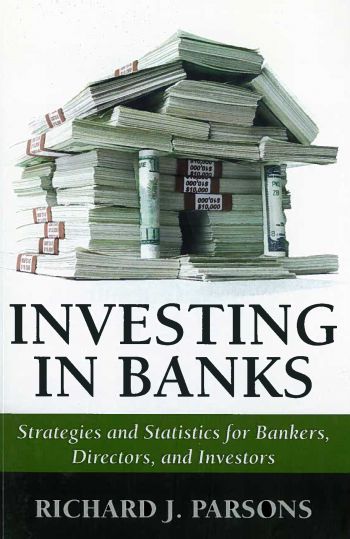 Investing In Banks: Strategies and Statistics for Bankers, Directors and Investors. The Risk Management Association. 246 pp.

Reading this book was not the experience I expected starting out. But I recommend you read it through for some unexpected insights.

I’d read—and reviewed—Richard Parsons’ first book, Broke: America’s Banking System: Common Sense Ideas To Fix Banking In America, a couple of years ago. I found Broke to be an interesting exposure to his executive-level experience and opinions derived from service at one of our country’s biggest financial firms, Bank of America.

The subtitle of this new book suggests that it will be of interest to bankers, directors, and investors. Having read it, I believe its greatest appeal will likely be to senior managers and directors. One section especially stood out as a important take on performance. But let’s not get ahead of the story.

The primary, though not exclusive, landscape of the book is on the performance metrics of publicly traded banks. Parsons notes that there were 781 banks with publicly traded equity out of about 6,000 insured depositories at yearend 2014. He further devotes considerable research and attention to 312 banks in this grouping of publicly traded banks that he refers to as the “Parsons 312.” These institutions have consistently exhibited superior financial metrics since 2004 that prove worthy of understanding and emulating.

The Parsons 312 comprise about 5% of all banks and about 40% of all publicly traded institutions in 2014. The list includes banks of all asset size and headquarters located in 45 states.

The leading bank performance ratio for purposes of the book is return on equity, the earnings of the enterprise divided by the stockholders’ equity. This is familiar ground to all bankers. But the emphasis on a publicly traded equity brings other considerations to the fore such as Risk Adjusted Return On Equity.

As more than 90% of domestically chartered banks are privately held, this isn’t necessarily a principal analytical measure for many if not most bankers. I’ll leave it to those who choose to read the book to evaluate the utility in one’s individual circumstances of considering such calculations.

However, one of the intriguing techniques that Parsons uses is to put such measures into the question of whether individual banks are adequately compensated for risk.

One way or the other, the answer to that query can be difficult to prove conclusively. But even asking the question has relevance in our current historically low and extremely narrow net interest margin environment, and the current state of the business cycle. [Editor’s note: Ed’s most recent blog poses some pointed questions about lending at this point in the cycle. Read, “Are you ignoring flashing yellow lights?”]

Parsons wastes no time discussing whether the banking industry is properly capitalized. Instead, he focuses on the necessity for banks to earn an appropriate return.

The aim is to have one sufficient to attract capital to accommodate long-term growth as well as to satisfy safety and soundness concerns. Parsons makes his case early on and constantly reinforces it with examples of high-performance banks and how they consistently accomplish such superior performance.

He wonders, for example, whether some lending product lines are more profitable than others and uses familiar metrics to demonstrate the implied differences. Among the kinds of questions he asks:

• Are bankers of a certain age more likely to lead their institutions into mergers?

• Does bank size matter in the measurement of long-term performance, and if so, how?

• Is banking a more profitable enterprise in some parts of the country compared to others? Why would this be so?

• Why is the provision expense to the loan loss reserve the most important investor metric this year and for the next four or five years?

• How important is GDP growth to long-term bank profitability?

I found all of these questions (and many others) interesting, although for officers and directors of privately held banks, the level of urgency and relevance might vary somewhat person to person.

Key aspect of the book: productivity

But the most interesting and useful insights—and to me, the prime focus of inquiry that makes the book a valuable resource—were Parsons’ comments and analyses on bank productivity.

I, like most experienced bankers, am familiar with that cluster of ratios and metrics that are often associated with a generic condition known as operational risk. This is the risk to income and equity of not being as consistently and prudently profitable as one can be. We look at the Uniform Bank Performance Report metrics of assets per employee and per capita salaries per employee and get some rough sense of productivity.

To Parsons’ way of thinking, banks should be run for (among other things) the long-term benefit of employees and the investors/owners. The easy way to get a sense of that is to compare total net income of the bank to total personnel compensation.

This was frankly a new way for me to look at this ancient issue and the result was a sort of blinding flash of the obvious.

In 2014, the median income-to-compensation ratio for the Parsons 312 was 63% and for all insured depositories, it was 53%. This means that the investors in the Parsons 312 earned 63 cents of every dollar of compensation paid to the employees with a comparable 53 cents on the dollar for all the 6,000 plus depositories nationally.

But here’s what got my attention: Shareholders of 43 of the Parsons 312 earned between 100% and 120% of total employee compensation!

The picture is similar when looking at the entire industry. FDIC data show that banks in 2004 paid employees $141 billion in the aggregate and the owners’ account $135 billion. Beginning in 2007, these numbers began to diverge (as one would expect in the bruising few years of the Great Recession) but in 2014, the employees were paid $190 billion while $153 billion was left for the owners.

Clearly, the different between the “312” and the herd bear examination.

There are other and useful ways of looking at productivity, too. These include such considerations as institutional size, principal product line, geographic location, and such.

The fact that the analysis was primarily directed to publicly traded banks does not diminish the value of the lesson to virtually any bank in the industry.

Another constant theme running through Parsons’ book is that consistent, qualitatively superior performance ultimately results in better banks, a healthier industry, and a markedly enhanced level of personal and professional satisfaction for bankers.

It’s perhaps an idealized way of looking at the industry, free of the influence of the cowboys and mediocrity that permeates the leadership and governance of some banks.

This concept of performance excellence was showcased on the first page of the book:

He sets about to prove just that with an amazing array of measurements. I think the “why” of these calculations and the different perspective that he brings to bank financial performance in particular should make this book a particularly valuable tool to directors and senior managers.

More in this category: « Designing for better client experience Your guide to the blockchain revolution »
back to top