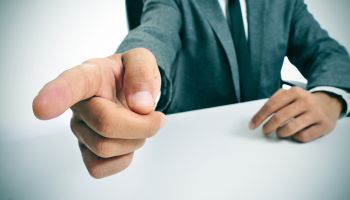 They say that “breaking up is hard to do.” But breakups between CEO and bank can be handled amicably, says community bank advisor Jeff Gerrish in the second part of a two-part blog series.

In my previous blog, I identified some “red flags” that may indicate that the CEO and the board of directors are not on the same page, either from a personality standpoint or with respect to the long-term vision of the organization.

This blog will address how to amicably say “goodbye.”

If the CEO and the board cannot see eye-to-eye, it may be time for them to go their separate ways. If that is the case, there are a few things to keep in mind to keep departure discussions amicable.

Start working on the separation agreement

First, the board needs to check to see if the CEO is currently under an employment contract.

You would think most boards would know that but, frankly, some CEOs have been under an “evergreen” employment contract for years and years. An “evergreen” contract is one that renews annually or every two or three years for another two or three years unless somebody gives notice otherwise. Your CEO very well may be, but everyone will have forgotten.

If the CEO is under an employment contract, then, typically, these agreements provide for a specific term of employment that cannot be altered unless the parties jointly agree or the CEO commits some type of fraud, gross negligence, or other self-serving act that constitutes a termination “for cause.”

In my experience, in most cases, the circumstances leading to a parting of the ways do not amount to a “for cause” event. Consequently, the parties have to reach some type of agreement, which means both will have to make some type of compromise and neither will be wholly satisfied (the definition of a good settlement). The written agreement resulting from these discussions is generally referred to as a “separation agreement.”

Every time a senior management official, particularly the Chief Executive Officer, leaves an institution, the cessation of employment should always be governed by a negotiated separation agreement. At a minimum, this agreement should include provisions related to severance pay, nondisclosure of information, non-disparagement, and non-competition.

For obvious reasons, severance pay is one of the primary provisions of any settlement agreement. Typically, the amount of the severance pay is proportional to the CEO’s salary as an employee of the organization. For example, if the CEO’s salary is $130,000 annually, a six-month severance provision would typically provide for $65,000, paid in bi-monthly installments for the six-month period. However, the parties can reach any understanding they deem appropriate under the circumstances, including consideration of director fees, bonuses, or other incentive compensation.

A note here: If the bank is a troubled institution (and yes, there are still 600 plus of those) and the board decides to throw the CEO under the bus, then the CEO may find he or she gets a “double whammy.”

The CEO will lose his or her job and any severance is restricted by FDIC Regulation Part 359. Part 359 places restrictions on termination payments provided to “institution-affiliated parties” in banks in “troubled” condition. In order to make a substantial termination payment, the institution must file an application with its regulator demonstrating that the CEO has not committed fraud or breach of fiduciary duty; is not “substantially responsible” for the institution’s current troubled condition; and the CEO has not violated any banking laws that would have a material negative impact on the institution. Part 359 does provide for “de minimus” payments of up to $5,000.

In addition to severance payment provisions, a separation agreement should also include provisions related to nondisclosure of information. The CEO is clearly in a position that allows access to a substantial amount of confidential information. The severance agreement should make clear that the CEO is not entitled to disclose any of the confidential information he or she may have obtained during the course of employment.

Another component of the separation agreement is a requirement that neither the CEO nor the institution make any negative statements regarding the other party or reveal any of the terms of the agreement. While the CEO or one of the members of the board is free to say whatever he or she wants to his or her spouse or non-bank affiliated golfing partner, no statements can be made that would negatively impact the bank’s business or the CEO’s future job prospects or character.

Noncompete clauses and other limits

Ultimately, the bank’s customers will make their own decisions, but the CEO should not be able to solicit bank customers for a certain period of time after his or her employment ends.

Another typical component of a settlement agreement is some type of a non-compete. Often, the non-compete will run the length of the severance payment, but not always.

Keep in mind also that state law varies on non-competes. In California, for example, non-competition agreements are against public policy except as it relates to trade secrets. In most states, the non-compete is judged by its breadth in the type of industry it covers, its geographic reach, and its duration. All of those need to be reasonable in view of the facts and circumstances of the situation.

As a practical matter, a non-competition clause cannot generally shield the bank from market competition, but it can give the bank an opportunity to fill the CEO’s shoes without the CEO immediately going to the bank across the street.

For smaller institutions, the geographical scope of a non-compete is usually the bank’s market area. As noted, the length of the non-competition restrictions are usually tied to the length of the severance payments under the terms of the separation agreement, but in any case, the length must be reasonable. Because it is unlikely (and unwise) that a bank would provide the CEO three years of severance pay to make up for the lack of job prospects, banks typically limit the non-competition term to one year or, at most, two years.

Putting the best face on it

Although some goodbyes start ugly and end uglier, most situations where the CEO and the board are on different pages can be resolved amicably. Negotiating a good settlement agreement allows each party to have its say and ensures they keep the peace when they go their separate ways.

More in this category: « Tailor your risk management to your bank’s risk 5 steps to maintaining independence »
back to top