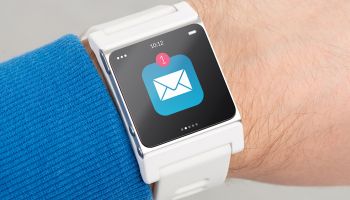 The annual Consumer Electronics Show in Las Vegas continues to get Americans, if not salivating, at least scratching their heads over the next generation of technological capabilities, no matter how esoteric.

In case you missed it on the news, one of the first items to come out of this year’s show: the introduction of a “smart” baby onesie—basically an electronic baby monitor—along with a “smart” bottle warmer. There were plenty of other revelations out of CES, but these serve to illustrate a broader technology trend that’s just beginning to make an impact: wearable technology.

Intel highlighted the onesie and the bottle warmer simply as examples of how its new computerized technology and suite of tools can assist inventors, entrepreneurs, and consumer product designers to come up with new ideas and new applications. Evidence is growing that wearable technology not only is possible, but also may be creating a whole new consumer-driven market.

A specific case in point: Google Glasses. Still not widely available, they’ve driven lots of speculation about what kinds of applications they may incorporate. Basically they work by combining a camera, projector, battery, Bluetooth, and wi-fi connectivity to an internet provider, along with GPS and voice recognition.

David Webber, writing in his blog for Intelligent Environments, poses this scenario: You walk into a shop, look at items on sale, wink into your Google Glass [or give it a verbal command], and instantly your bank balance gets displayed in your peripheral vision, telling you if you can afford a particular item.

“New research by Intelligent Environments reveals that 16% of British consumers are already interested in using Google Glass to manage their finances, without even seeing or testing a working prototype,” he said—way back in May 2013.

“Who among us wouldn’t consider wearing a piece of technology that lets our insurer know that they should be charging us less, not more?” the Credit Suisse writer says.

Believe it or not, some banks around the world reportedly are already experimenting with wearable technology, primarily the smart glasses kind. According to a blog called The Financial Brand, Banco Sabadell in Spain has launched a banking app for Google Glass, allowing the user to connect to his or her online account. For instance, a customer could connect with the bank’s contact center and allow a bank representative to see what the customer is looking at, and then proceed to get a balance or find the nearest ATM.

Similarly, PrivatBank in the Ukraine reportedly is testing Google Glass apps that allow for bill payment, fund transfers, and paying for items by using the glasses to snap a picture of an item’s QR code.

Whether or not wearable technology will take off depends not only on consumer acceptance, but on their very awareness of its possibilities. That’s a big question. Harris Interactive recently polled 2,250 American adults and found that 37% were not at all aware of wearable tech devices, 33% had heard the term but knew nothing about them, and 59% didn’t understand the need for wearable tech devices.

However, one other finding of the poll is interesting: 48% admitted that they’d like to be able to access smartphone functions without having to dig in their pocket or bag. This could provide some clever marketer an avenue to pitch a wearable solution.

“We believe that the category’s essentially limitless possibilities are actually working against it, making it harder for consumers to wrap their collective heads around the segment. People need to understand what wearable tech is and how it can benefit them,” says Aaron Kane, senior research director at Harris Interactive.

That general awareness may be just around the corner. Accenture, in a recent survey, found that 52% of consumers are interested in buying wearable technologies such as fitness monitors for tracking physical activity and managing their personal health. It also notes that internet-connected eyeglass displays could enable consumers to browse the internet, take digital photos, and receive hands-free notifications.

All these latter items have obvious applications in the banking world.

Meanwhile, general awareness may be growing, as measured in other ways. For example, late this month, a group will present “Wearable Computing Conference 2014 New York City: How Wearable Technologies are Revolutionizing Mobile Wireless Internet, Healthcare, and Fashion.”

Another example: The group FlexTech Alliance, an organization that promotes the growth and success of the flexible and printed electronics industry, [there’s already a defined industry!] announced the formation of two users groups, focused on wearable electronics and disposable electronics.

Then there is this: Juniper Researcher estimates that global wearable smart glasses shipments will reach 10 million per year by 2018, compared to an estimated 87,000 this year.

“These devices would need to incorporate intuitive and user-friendly functionalities and capture the imagination of the general public making the technology seamless within their daily routine,” says Juniper’s Nitin Bhas, report writer.

Which circles back to the CES show this year. Angela McIntyre, research director at Gartner, when asked beforehand what she thought would be a big topic at the show, said “Wearable computing is one of the hottest topics being discussed today.”

While the first round of wearable applications likely will be in the health and fitness area, she sees other possibilities in personal navigation and virtual personal assistants to help with in-store shopping. “Personal identification, biometric information [for security], and payment systems can be linked through wearable devices. Wearers can be admitted to events, access health records, and make purchases, through their wearable devices,” she says.

While all this really is in the conceptual stage—despite the reported pilots overseas—that kind of is the point, and Intel, at the CES, is well aware of it. In fact, it is putting up $1.3 million in cash awards as part of its “Make it Wearable” challenge.

Says Intel: “The global effort will call upon the smartest and most creative minds to consider factors impacting the proliferation of wearable devices and ubiquitous computing, such as meaningful usages, aesthetics, battery life, security, and privacy.” Winners, and even significant contenders, will be connected with industry leaders to help realize their respective ideas.

Presumably, this market segment will be well on its way by the time those infants in smart onesies graduate to big boy and girl pants.

The Future of Wearable Technology

What to Expect at CES 2014 - Wearable Computing

What Is Wearable Tech, and What Can it Do for Me?

Tagged under Retail Banking, Technology, Making Sense of it All, Blogs, Feature, Channels,

More in this category: « CIOs: Deal more with the big picture, less with daily glitches “Omnichannel” among retailers increases risk »
back to top