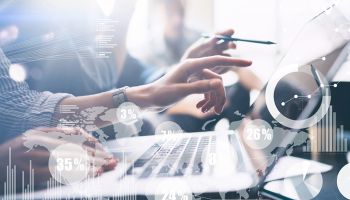 Blockchain projects have hit the sweat equity stage, according to Lata Varghese of Cognizant.

Where does a bank begin when it has decided to get involved in blockchain technology? Not necessarily with blockchain.

Instead, management may need to begin with strategy, that is, deciding what it is the enterprise wants to accomplish. Actual involvement of blockchain technology may be just one step in a process of multiple steps affecting a business line or function that a bank is attempting to improve or build from scratch.

So says Lata Varghese, assistant vice-president and leader of Cognizant’s blockchain and distributed ledger consulting practice, and one of the authors of the report, Financial Services: Building Blockchain One Block At A Time, discussed on this website earlier this year. [Read “Don’t miss the blockchain train”]

That report had found that many organizations were only dipping their toes into blockchain technology, or hanging back, awaiting further clarity in the fast-moving technology. A premise of the report was that organizations couldn’t afford to hang back, but should begin working with the developing technology.

Varghese, interviewed during the recent Money 20/20 Conference, says that she has detected a real change. “People are definitely taking the next step,” she says. “They have stopped making the conversation about the technology and are making it more about the work they want to accomplish.”

For those financial organizations that have made it over that first key hurdle, things are just beginning. Ultimately, blockchain technology involves working with other organizations. That’s because, virtually by definition, a shared ledger, which blockchain uses, implies other parties.

“You have to work across multiple companies,” says Varghese.

Now, organizations have to roll up their sleeves. “It’s about getting some of these systems into production,” Varghese explains. “The hard work is going on now.”

Blockchain technology is being applied or considered for many types of financial functions, and Varghese says that there are some key points banks must understand as they move forward.

1. Invisible to customers. One point is that blockchain, typically, will not be a customer-facing technology. For banks, most applications will involve building, or rebuilding, infrastructure. Customers won’t care that the bank has signed onto this blockchain effort or that, says Varghese.

“They will come for the end result of it,” she explains.

2. Blockchain may remake parts of P&Ls. Another point is that the application of blockchain technology to banking will affect the viability of some longstanding business models. Some banking revenue streams will dwindle as blockchains are built in those spaces, according to Varghese. Ideally, what they lose in revenue they will gain in improved efficiencies, she explains.

One example she cites are certain elements of the payments business. A common goal among payments-oriented blockchain projects is to bring down the cost and increase the speed of international transfers. Banks have historically made good income from that business. While that will go away, says Varghese, the shift will free up capital, which can be deployed in other profitable businesses.

3. Some legacies will go. Banks in Europe, the Mideast, and Asia tend to be less encumbered with the legacy systems that U.S. banks find themselves mired in. Because of this, more progress has been made in other countries on blockchain.

However, Varghese believes more U.S. organizations will be making the hard choices to reexamine existing infrastructure.

4. Regulators will be watching. Varghese explains that as experimentation picks up, U.S. regulators will not be looking at the technology itself, but how it is being used.

A skeptical question to ask, as activity picks up, is whether there is some technology around the corner that will shunt blockchain off the main track or even consign it to tech oblivion.

“The concept of blockchain is very powerful,” she explains. “I think it is here to stay.”