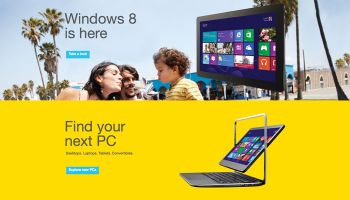 Windows 8 has the potential to recoup Microsoft’s dominance in the digital realm, leapfrogging Apple technology, and continuing to be the operating system of choice for business.

With its unique combination of live tiles on the start page, familiar Windows applications in the background, and identical software used in all three types of devices, Windows 8 could become as ubiquitous as the PC, tablet, and smartphone combined. That’s what the giant tech company is betting on—literally.

The onslaught of this new behemoth has bankers scrambling to understand its capabilities and then make the best use of it.

“We have a large number of customers who are committed and making their plans now to roll out Windows 8 enterprise wide,” says Victor Dossey, industry technology strategist for banking at Microsoft. “These types of devices are a great opportunity to interact with customers more effectively and to give them an engaging and a memorable experience—one that is positive—from the banking world.”

Up until now, Apple has owned the pinch, jab, and finger-swipe paradigm for maneuvering digital applications. But Microsoft, with its Windows 8 introduction, seeks to upset that applecart with its own brand of user interface—one it hopes will become as pervasive as the original Windows was, only adapted to what consumers and businesses increasingly are demanding.

Industry analyst Gartner Inc. says Microsoft is taking a big gamble with this new approach, but it’s a critical one. “When the PC dominated personal computing by providing a single device for messaging, internet access, gaming, and productivity, Windows was a powerhouse for Microsoft,” says Michael Silver, vice-president at Gartner. “However, smartphones and tablets, led by the iPhone and iPad, have changed the way people work, making the PC just one of several devices people use. The PC is increasingly simply a peer with other devices.”

Bank of America is one of the first banks to unveil a mobile-banking application available through Windows 8. Why? Marc Warshawsky, senior vice-president and head of mobile solutions, says, “The Windows 8 app is just the latest demonstration of Bank of America providing customers the best experience, no matter how they choose to interact with us.”

Windows 8 literally starts with what Microsoft calls “live tiles” that the user selects, positions, and programs according to individual preferences. The tiles are dynamically and continuously updated with the specific type of information on which the user wants to be kept up-to-date. That way, the user can see it right away without having to click and boot up the application.

Tommy Bradford, managing director of Strategic Alliances Group at Jack Henry, offers an example: “For any type of loan performance, or any type of portfolio performance, you can program it so the tile periodically updates with specific information saying if things are going well or not.”

“It becomes a visual filing system,” explains Dan Fisher, president and CEO of Copper River Group. “It’s very similar to apps, but it’s not apps. Those tiles can constantly update and run in the background. It could be an email list. Stock market quotes. Alerts. All those kinds of things.”

Depending on whether the computer, tablet, or smartphone in use supports it, the user can manipulate the tiles—and then, once activated, the underlying programs—by touching, pinching, and/or swiping the screen presentations with his fingers or, if preferred, through the familiar mouse-and-keyboard.

“We’ve heard from our bank clients that they really like the fact that if the application they are using doesn’t lend itself to the touch environment, they can always default back to the standard mouse-keyboard environment,” says Bradford.

Bring core to the floor

A key difference with Windows 8 is that once it is installed, approved users can access the bank’s core system, behind the firewall, through any device—computer, tablet, or smartphone, according to Scott Hansen, executive vice-president for business development at Harland Financial Services.

He gives an example of a branch representative walking out to the lobby with a tablet and sitting with a customer. “Because the tablet is running whatever software that would normally run on a desktop, that allows you to open up new accounts, teller transactions. Anything that the bank apps are doing today on a desktop hooked up to the core, the tablet does, but it’s now wandering around the branch,” Hansen says.

Microsoft’s Dossey says efficiency is seen in the example of being able to “pick up your tablet device and go out onto the floor and help [reduce] lines of customers, or use it for one-on-one meetings in a waiting area, and in lots of different ways that allow you to interact with customers differently.”

Another example: getting initials or signatures from clients on various forms. “What if you’re in the lobby of the branch, and all you need the customer to do is acknowledge they requested a cashier’s check or a funds transfer. Do you really have to go back to the desk and do all that? In a touch-screen environment … you literally just hand the customer the tablet and have them sign it with their finger,” says Hansen.

Boosting its own brand is clearly a goal for Bank of America in its early offering of Microsoft 8. “We put capabilities in the marketplace we think customers will find useful, convenient, and helpful. That’s the goal that we’re focused on,” says Bank of America’s Warshawsky.

Microsoft’s Dossey, a Bank of America customer himself, expands on the brand significance:

“What’s interesting is to look at that application and without opening it up, without getting in and checking to see [what has happened in the account], all that information can be provided simply on that live tile. I can see that the bank is taking care of me. It’s staying in touch with me. They are letting me know right through that Windows 8 application what my banking world looks like,” Dossey says. “The second thing is, it has brand reinforcement because, frankly, it has a logo of the bank [right there on the screen].”

Windows 8 has a number of security systems built into it. For one thing, there’s authentication through a virtual smartcard, which incorporates a token stored in a secure piece of the computer hardware. The tokens are provided either by a third-party certificate authority or by the company itself.

Another security aspect is the use of a “bit locker” that automatically encrypts everything stored on the local hard drive.

Probably the most visible security feature is what’s called the “trusted greeting.” It’s designed to prevent malware from being launched early in the boot sequence. Instead of the user typing in an identification and password, she provides a graphic image and designates a sequence of unique touches to it, which the sign-on program records (sort of like a baseball coach giving signals to a batter).

“If your login and user id involve a picture of your cat, where you know you have to tap the cat’s nose, left eye, and then right paw, it’s a much more complicated login to capture,” Hansen says.

Should the device ever be lost or stolen, Dossey says, administrators back at the bank can quickly do a remote wipe of the data.

To those used to the old Windows, the new tile-and-touch paradigm might seem daunting. No one disputes that users will have to get used to it—just as they once had to get used to switching to a mouse from the function keys.

Once past the opening page, however, Dossey explains that Windows 8 can do everything previous Windows versions do and in the same way. Still, says Hansen, the touch system is “actually going to be much faster and more efficient, even though on day one, you’re probably going to feel all thumbs by not using your mouse.”

The bring-your-own-device phenomenon, ironically, likely will facilitate the absorption of Windows 8, explains Bradford, since “the learning curve is kind of already being done outside of the organization. Because of the consumer devices, people are starting to expect it more from business applications.”

This new technology affects everybody. As old PCs wear out or their warranties expire, new PCs will automatically come equipped with Windows 8.

“Just like there are two billion PCs in the world today running various flavors of Windows, someday there will be two billion PCs running Windows 8, 9, or 10—all with the touch paradigm,” says Hansen.

But Microsoft is not just depending on assimilation. “We’re very much working with large enterprises to help them adapt Windows 8 into their environment,” says Dossey.

Various vendors, such as Jack Henry, Harland Financial Services, and others, have been invited to work directly with Microsoft teams to develop specific Windows 8 banking applications to offer financial institutions. For example, Hansen says, Harland’s solution will be available early next year.

Says Jack Henry’s Bradford: “What Microsoft is doing is basically bringing the desktop and the mobile world all together. Windows 8 is all one environment. It’s irrelevant what device you’re on. Fundamentally, it is the new desktop. That’s the strategy that is compelling to our bank clients.”