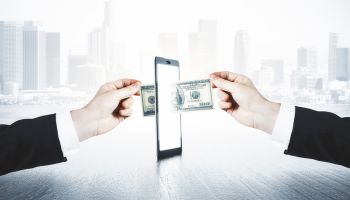 A trio of banks have become increasingly reliant on the digital lending industry as a revenue driver, an unpredictable bet as even the largest platforms scramble to shore up funding.

Digital lenders partner with banks so they can offer loans in all 50 states without a consumer lending license, and the loans do not need to abide usury limits imposed by state law. Several banks have a small number of these agreements, but three banks have become particularly dependent on digital lenders as an income driver.

WebBank, Celtic Bank, and Cross River Bank each have at least four partnerships with digital lenders. Executives at all three banks did not respond to a request for comment.

Typically, issuing banks will hold these loans for at least 24 hours before selling it to the digital lender, who then either keeps the loan on its balance sheet or sells it as a whole loan to institutional investors or via fractional notes to retail investors. Because the digital lender usually will not issue the loan unless an investor has already agreed to buy it, the issuing bank has minimal credit risk, said Todd Baker, managing principal for Broadmoor Consulting LLC.

But the banks still have exposure. WebBank, in particular, stands out as the issuing bank for LendingClub Corp. and Prosper Marketplace Inc., arguably the two largest consumer loan platforms in the space. Though credit risk is minimal, WebBank could see reduced revenue if digital lending collapses, Baker said.

"They don't really have a business outside of this to speak of," he said. 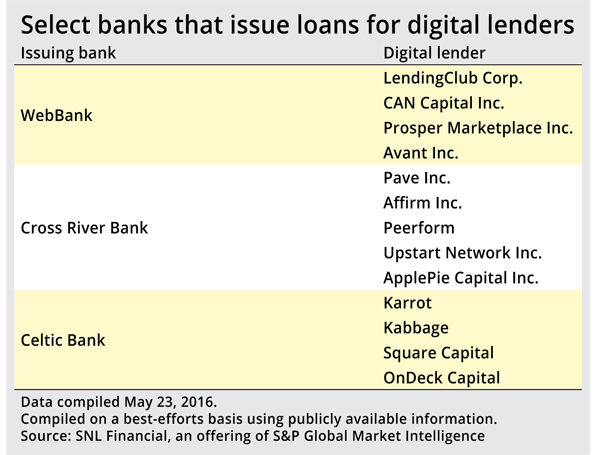 WebBank has been issuing loans for digital lenders nearly from the beginning, signing a loan sale agreement with LendingClub in December 2007. LendingClub was relatively tiny back then, originating just $13.5 million in loans for all of 2008, compared to $2.75 billion of originations in the 2016 first quarter alone.

WebBank's dependence on these loans has matched LendingClub's growth. By the 2016 first quarter, the bank reported loans held for sale equal to 62.07% of its total assets, compared to an industry average of 0.47%. 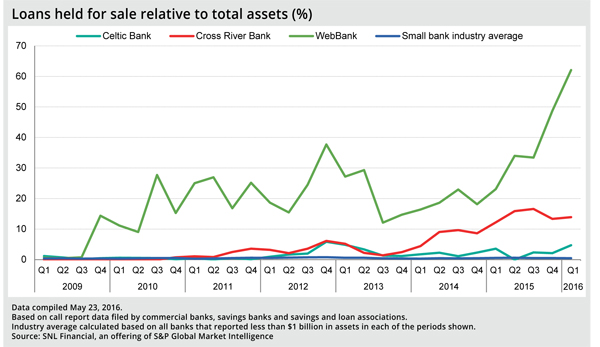 While no bank is as exposed as WebBank, Celtic Bank has rapidly expanded its digital lending business. The bank reported loans held for sale equivalent to 4.72% in the first quarter, more than double the ratio from the 2015 fourth quarter. And revenue from net gain on sale also exceeded 60% of the bank's noninterest income. However, when looking at interest income, the bank shows some diversity in revenue as the vast majority comes from real estate loans, not consumer loans as was the case for WebBank.

Celtic Bank's reliance on digital appears poised to increase as it becomes the sole issuing bank for On Deck Capital Inc., one of just two publicly traded U.S. digital lenders. On Deck had an issuing bank partnership with BofI Federal Bank since 2012, but On Deck disclosed in a regulatory filing that the partnership would expire without renewal this July.

Meanwhile, Cross River Bank, the issuing bank for a number of smaller digital lenders, has seen its loans held for sale as a portion of total assets plateau in recent quarters, albeit at a level much higher than the industry average. 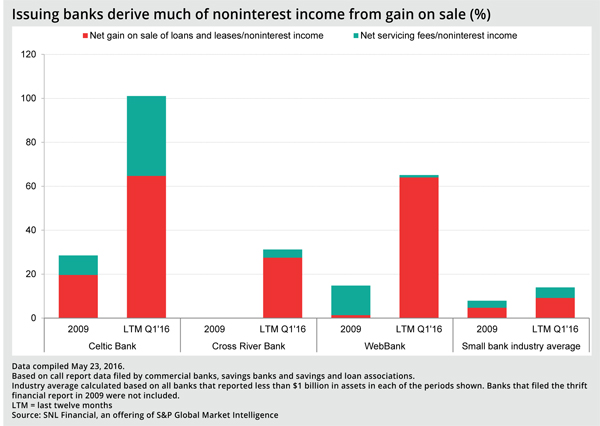 Digital lending has been in turmoil since the start of the year, as institutional investors have become wary due, in part, to concerns about a potential recession and digital lenders have yet to be tested by a credit cycle.

There is also a cloud of regulatory risk. A court ruling in a case known as Madden v. Midland Funding LLC threatens the fundamental nature of issuing bank partnerships.

LendingClub's improper loan sale scandal has only increased investor wariness. As a huge lender, LendingClub alone represents significant risk to WebBank. But the troubles at LendingClub could also affect other digital lenders since the company had widely been viewed as an industry leader with top-notch business practices.

Broadmoor's Baker, a longtime skeptic of the industry, said he thinks LendingClub faces a tough road.

"They're going to lose a great deal of money this quarter," he said. "If they aren't selling loans, they can't keep up with their expense run rate."

James Friedman, an analyst with Susquehanna Financial Group, said he thinks the company will survive though he agreed the company's viability is largely dependent on keeping and attracting institutional and retail investors.

"I think, ultimately, investors will come back," he said," because investors have to find deals, and that has been the value proposition from the beginning—that these are strong risk-adjusted deals." 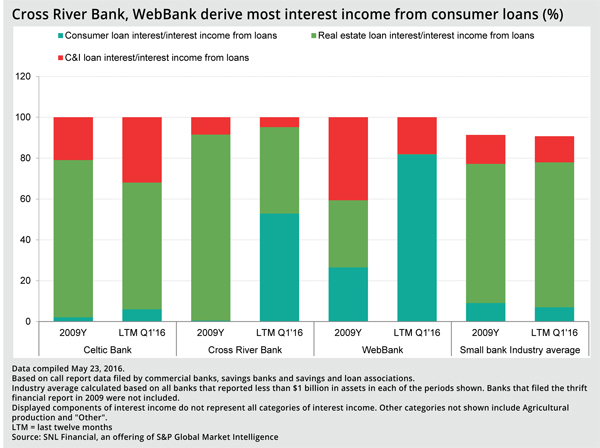 This article originally appeared on SNL Financial’s website under the title, "Banks that issue loans for digital lenders increasingly reliant on shaky industry"