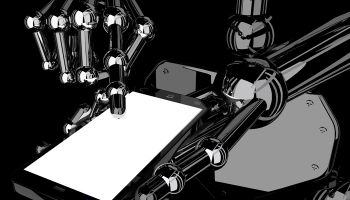 For years observers of trends have commented on the incredible convergence of various developing technologies and how they are coalescing into even more sophisticated techno-environments.

Generally, these technologies include the internet, various platforms in the cloud, telecommunications, digitalized this and that, and mobile this and that. As these have converged, new aspects of banking, among other industries, have evolved, resulting in, for example, remote capture; various core systems-as-a-service; online and mobile banking versions 1.0, 2.0, maybe even 3.0; and more.

Now it seems that technology convergence is becoming even more incredible. Add to this list the internet of things and artificial intelligence.

While these have been around for some time already, people tended to speak of them as discrete items, just as people used to talk about cell phones and the (regular) internet as discrete things. Now, however, AI and IoT, for example, are starting to be mentioned in the same breath.

For example, Accenture issued a report in September in which it predicts AI could double annual economic growth rates by 2035 by changing the nature of work and spawning a new relationship between man and machine.

“AI is poised to transform business in ways we’ve not seen since the impact of computer technology in the late 20th Century,” says Paul Daugherty, chief technology officer, Accenture. “The combinatorial effect of AI, cloud, sophisticated analytics, and other technologies is already starting to change how work is done by humans and computers, and how organizations interact with consumers in startling ways.”

(While this report does not mention IoT specifically, Daugherty’s “combinatorial effect” certainly points to further tech convergence, which could include IoT.)

To this point, Forrester Research recently issued a list of technologies that will change the tech world by 2021. Headlining its list is, you guessed it, IoT software and solutions, followed closely by AI and cognitive technology.

Not too far down Gartner’s list is what it calls “digital technology platforms,” which are composed of information systems, customer experience, analytics and intelligence, the IoT, and business ecosystems. (Emphasis added.)

(As an aside, a separate note from Gartner provides what may be a comforting—maybe not—observation about autonomous, or self-driving cars. Brian Prentice, research vice-president at Gartner, says full autonomy may be neither possible nor desirable.

“Human beings are still required as the final point of redundancy in an autonomous vehicle, so a fully autonomous car requires a steering wheel should a driver be required to take control. But putting a steering wheel in an autonomous car means a fully licensed, sober driver must always be in the car and prepared to take control if necessary. Not only does this destroy many of the stated benefits of autonomous vehicles, but it changes the role of the driver from actively controlling the car to passively monitoring it for potential failure.”)

Still, it doesn’t mean that AI and IoT won’t continue to make inroads. (No pun intended.) Celent, for example, recently issued a report in which it observes that AI technologies are increasingly being applied in the banking industry, mainly toward knowledge management, identity authentication, market analysis, customer relationship management, anti-money laundering, and risk control.

“With their ability to fully understand the market, customers, and regulatory changes through data, banks are in the best position to apply these technologies,” says Hua Zhang, a Celent analyst.

More examples: Visa and Intel announced a collaboration to drive better payment security for connected devices (i.e. IoT). These include personal computers, mobile devices, intelligent appliances, and wearable technologies. The companies plan to work together to integrate data security solutions into chipsets (i.e. “Intel Inside”) that manufacturers use in their new device versions.

“The rise of connected devices will rapidly expand the platforms we use to shop and pay. It will also open up new entry points for hackers,” says Mark Nelsen, senior vice-president of risk and authentication products at Visa. “Tackling this security challenge requires a new level of coordination between planners in payments, technology, and computing.”

Not to be outdone, Mastercard announced it is partnering with FitPay to integrate its contactless payments to consumer wearables and IoT devices.

“We see a tremendous demand for payment capabilities coming from innovative device manufacturers who recognize the importance to continually expand the value proposition of their products,” says Michael Orlando, cofounder and CEO, FitPay. That company expects to enable payments on more than 2.5 million wearable devices in 2017, with the number rising to more than 9 million in 2018.

They may be on to something. Javelin in July issued a report where it observes that IoT technology, particularly involving things linked to payments systems, is due to spur ever more impulse buying.

For example, a washing machine of the (near) future could come equipped with a “buy now” button which, once pressed, would automatically send signals to a company that ships detergent, while simultaneously collecting money from the user’s account. (Indeed, Amazon’s Dash buttons are a freestanding take on this theme.)

“Consumers will increasingly gravitate to using payment forms that offer the easiest, fastest, and most secure payment methodology, particularly one that also integrates shipping/billing addresses as this removes the challenges of typing on a smaller phone keyboard,” says Michael Moeser, director of payments at Javelin.

Speaking of security, this IoT trend converges neatly with a new AI product announced by IBM in which it adds behavioral biometric analysis capabilities to its digital banking fraud prevention technology.

This really is new. It claims to transcend code words and security questions to protect bank accounts. Instead, its Trusteer Pinpoint Detect product uses analytics and machine learning to understand and remember each user’s unique gesture as he or she logs into a bank account—distinct movements of a mouse, for example, or the time, to the millisecond, the user takes to tap in a user ID. Should somebody else try to log into that account, the AI detector would compare the gestures to that of the legitimate user and if they didn’t match, the imposter would be locked out.

“Given enough time and resources, cybercriminals can defeat passwords and security questions,” says Ravi Srinivasan, vice president, Strategy, IBM Security. “Behavioral biometrics is about what the user does, not what the user knows.”

Creepy, maybe. But that’s sometimes what technology convergence is all about.

Artificial Intelligence Poised To Double Annual Economic Growth Rate In 12 Developed Economies And Boost Labor Productivity By Up To 40% By 2035, According To New Research By Accenture

Artificial Intelligence In The Banking Industry: From Data Analysis To Semantic Analysis

Forrester predicts IOT, AI, AR, And VR Will Change The Tech World By 2021

Tagged under Technology, Blogs, Making Sense of it All, Fintech, Feature, Feature3,

More in this category: « All customers are always right—right? Attack of "thingbots" now is a thing—really »
back to top