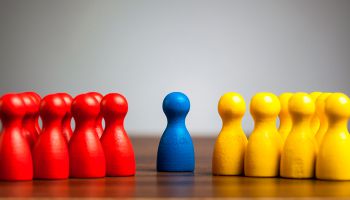 This is one of three articles recently posted concerning the coming together of fintech and banking, through partnerships and otherwise. You can find links to the other articles at the end of this one.—Steve Cocheo, executive editor and digital content manager

Bankers have grown used to doing business in a thicket full of laws and regulations. Fintech companies, stressing innovation and agility, don’t want to live in the thicket.

“Entrepreneurs are terrified of all this,” says Veronica McGregor, partner in the San Francisco office of Goodwin Procter LLP. McGregor’s own father is, as she describes him, a serial entrepreneur. Between family background and a career increasingly devoted to working with fintech firms as well as banks, McGregor has learned how to help both sides understand the other.

Such understanding grows more critical as fintech and banking begin to think more in terms of partnership, white labeling, or, at least, “coopetition.”

“My job is helping banks deal with cowboys, and helping cowboys deal with dinosaur banks,” says McGregor. On the fintech side she has worked with everything from “two guys in a garage” with nearly no capital to major tech corporations.

“It’s in the DNA of an entrepreneur to approach things from the viewpoint of ‘What problem am I trying to solve?”,” says McGregor, who was a banking lawyer before reaching out to fintech firms as well. “And I come along and throw a problem into their problem solving.”

Compliance, from the “alphabet regs” to newer forms such as UDAAP, comes with the territory in every aspect of banking. But McGregor regularly sees wishful thinking among fintech players who come to her for early advice. Sometimes they are in denial that what they want to do falls under the regulatory tent.

Entrepreneurs come up with fresh ways to describe what they offer through websites and apps—to avoid regulation—but basic financial functions are what they are. A deposit is a deposit, a loan is a loan, no matter what you name it. So when McGregor meets with would-be players, she often must douse them with cold water.

“It’s not what you call yourself,” she explains, “it’s what you are doing. Are you engaging in a regulated activity?”

If the firm is, then it has to worry about licensing, compliance—anything touching on the proper conduct of that activity.

On the other hand, in spite of the image—and perhaps self-image—of fintech as a modern Wild West of untrammeled rugged individualism, McGregor periodically has to cry “stop.”

“I look at their proposal,” she explains, “and I may have to say, ‘You can do what you want to do, but you can’t do it that way.”

Presenting the bank side

McGregor says that she’s often in the role of a sort of marriage counselor, helping banks and fintechs to understand each other.

McGregor gives an example that typifies the barrier seen in communication and understanding. A developer will come up with a cool app, but will design it such that no request for a Social Security number and other potential “know your customer” information will be taken. The fintech perspective is that such details represent friction, which can prevent interest from converting into enrollment.

McGregor says that bankers, on the other side of the desk, feel fintech players can be irresponsible. Any bank interested in partnering with such a developer would feel very uncomfortable not obtaining KYC information, says McGregor. Bankers regard KYC as an essential element of onboarding customers and have had years of examiner scrutiny to learn that lesson.

“It’s not that banks are allergic to innovation,” says McGregor.

Clearly, one way or another, fintech will come under some degree of regulatory oversight. Just what that will look like remains to be seen.

Much attention has been paid to the “fintech charter” that the Comptroller’s Office has under consideration. McGregor points out that many questions won’t be answered about the utility of such a charter until OCC issues something definitive. Most recently the agency has said it will issue a proposal before the end of 2016.

In the meantime, says McGregor, many nonbank financial players require approval to be money transmitters. And that is a state-level affair.

The mix of types of fintech companies that McGregor works with evolves. Now, she says, 20% of her practice involves firms involved in one way or another with blockchain technology.

“Everyone wants to know how blockchain will be regulated,” says McGregor. “It depends on what you are going to do with it.”

Elaborating, McGregor explains that “I don’t anticipate that there will be a federal blockchain regulator any more than there is a federal internet regulator.”

McGregor has worked with every side of the fintech world, including venture capitalists, and that has taught her that it takes significant investment to make even a great idea take off.

She says that perhaps 2% of fintech launches reach success, in her experience. Investors have to spread their funds across multiple fintech players, in hopes that a few pay off.

“You have to kiss a lot of frogs,” McGregor advises.

Read "Time to partner up?"