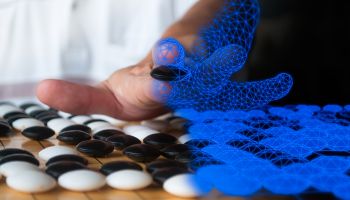 "Go" is an ancient Chinese board game where the object is to surround as much territory as possible. The game has come to be considered far harder than chess.

“Sears was the Amazon of the early 20th century,” says David Judge. His point is that you can be a leader at one moment on history’s timeline and either evolve as you move down the line, or allow newcomers to eclipse you.

Judge is the kind of technologist where in one conversation you may find yourself talking about 50s science fiction; the early days of commercial electricity, Edison, and Tesla; and the outlines of the real future of technology and mankind, and more specifically, bankers.

Judge came to SAP Leonardo, the parent company’s innovation practice, as vice-president for predictive analytics and machine learning after a stint at Cognizant. He says that it’s still early days for artificial intelligence in banking.

Indeed, the term itself is still being sorted out in the field. He compares the state of AI awareness and understanding to that for cloud computing ten years ago. A decade back, the term “cloud computing” was somewhat loosely defined and bankers were trying to understand what it meant and what it implied. AI today is in much the same place.

Computers have been outperforming bankers and other human beings for years, says Judge. This has been a matter of speed. But more recently, he continues, artificial intelligence has begun to near the stage of AGI—“artificial general intelligence,” a term for technology that can approximate human conscious.

A measure of the progress of AI is the existence of computers with the ability to play “Go.” This ancient Chinese board game of playing stones moved on a grid has the deceptively simple goal of surrounding more territory than one’s opponent. As complex as chess may seem, Go has been considered even more advanced.

“In Go, there are more possible ways to play than there are atoms in the universe,” says Judge. For a computer to be able to play Go successfully is considered a notable achievement for AI.

Banks’ usage of AI has not reached that point yet, but they have been on the continuum all along. The baby steps are long past.

“Banks have been using rules-based systems for decades,” says Judge. The machine learning form of AI is being used to fill in the gaps between the rules of rules-based systems, explains Judge. Further adoption will be subject to how quickly banks can adapt to the newer forms of AI.

Banks have a change management problem, not a possibilities problem, according to Judge. For a taste, no pun intended, of where AI could take banks, he suggests looking at Lemonade. This company promises that it can process renters and homeowners insurance requests in 90 seconds and that it can handle insurance claims in three minutes.

Judge believes that to keep up with players with the kind of experience Lemonade provides, banks must be willing to develop new services more quickly. Startups tend to have cultures encouraging fast experimentation, he explains.

Oh yes, and that is entirely on a mobile device. “Maya,” the AI behind the service, will even cancel your old policy, if you wish—and obtain a refund if you have one coming.

What banks already bring to the table for AI and other innovation purposes, says Judge, is data. Banks are huge repositories of data that AI systems can use to learn from.

“They have more data than they know what to do with,” says Judge.