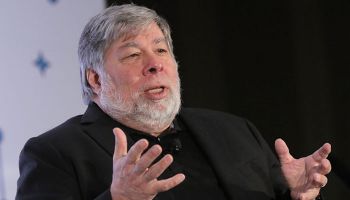 Which digital assistant does Apple guru Steve Wozniak prefer, Siri, Alexa, Cortana, or Google Assistant? The answer's not what you may think.

In many ways, Steve Wozniak was the brains to Steve Jobs’ marketing savvy in the early days of Apple. The greeting he received when he stepped onto the stage during a Money 20/20 Conference “deep dive” about artificial intelligence recognized that. The packed audience raised its eyes from assorted iPads, iPhones, and incarnations of Macbooks long enough to give him an ovation that actually seemed to surprise “The Woz” a bit.

All the more encouraging, then, that he treated his subject seriously, but with humor, often the self-deprecating kind. That’s a rare commodity at fintech events.

For instance, he joked at one point that he and Jobs had actually set out to create a level-playing field for the blind. He paused just long enough to display a seasoned standup comedian’s sense of timing.

Think, he said, “of all those people walking along the street, staring at their iPhones…” and not watching where they are going.

In the next breath, he had a darker comment, not quite preaching to the choir.

Wozniak said he doubted it. He said that he sees no sense of that in the world.

Amazement, yes. He related how an early app on the iPhone impressed him—the ability to use a finger to write notes that were converted to text. Being able to jot a note to remind him to take his daughter to the dentist was neat. Today, with the constantly updated Siri stepping into that kind of task, he is impressed by some elements of AI.

But even though IBM’s Watson “was a big step,” he remains something of a skeptical optimist about artificial intelligence in general.

The incredibly cheap price of memory today impresses Wozniak. “When we started Apple,” he said, “the amount of memory to hold a song cost close to a million dollars.”

What’s amazing to him is not only how far things have come since the early Apple computers and the early iPhone, but how much has not changed. Lack of compatibility, lack of interoperability, lack of universal standards still bedevil technical life.

“The only world wide standard we have today is wifi,” said Wozniak. “Everywhere you go in the world, it works.”

World according to Woz

Moderator Deidre Bosa, technology reporter for CNBC, probed Wozniak for his views on many current elements of technology touching on financial services. Among his views:

• Artificial intelligence. Wozniak began his involvement in computers as something of a skeptic about AI.

“I grew up thinking that a computer couldn’t get anywhere near a human brain, and never would,” said Wozniak. He recalled seeing early demonstrations of so-called machine intelligence, such as watching a computer place a blue ball in a matching blue box. He dismissed that at the time merely as a machine following rules: “That wasn’t intelligence. There was a difference.”

He has come to admire current efforts at AI, though he believes it has a long way to go. Take IBM Watson. “We have to tell Watson almost exactly what to do,” he said. “That’s not how the brain works. Watson has to be tightly trained.”

Tesla’s efforts to produce a self-driving car haven’t impressed Wozniak much. He calls the high end of AI “Level 5” and puts Tesla at “Level 2.”

Siri impresses him, and the way it has begun to approach having another human with you.

However, at one point the moderator took Wozniak through a lightning round concerning his technological preferences. “Siri or Alexa?” he was queried.

“That’s a really tough one,” he said. “I wish you hadn’t asked it.” They were close, he said, but from the technological viewpoint, he still preferred Alexa.

• Robots and AI replacing humans. Wozniak called this a “scare story.” He did admit that he sometimes wondered if you ran a company on AI and skipped the human CEO, if you might not make more money. More seriously, he saw AI and humans complementing each other, and indicated that AI would wind up creating jobs.

As for apocalyptic scare stories about AI, Wozniak thought that showed more about the way humans think than the way machines will think.

“They should only be our benefactors, doing what they can to help us,” he suggested. Just in case humans wind up with nothing to do, like the family dog, he said with tongue a bit in cheek, we should be nice to the technology.

More seriously, scare tales about robots running the world, he said, are “a worthless concept, though it’s fun to write about.”

He built on Isaac Asimov’s Three Laws of Robotics, a science-fiction construction that now has real-world acceptance, on how robots should safeguard humanity.

“My law, Woz’s Law,” he said, “is that a human being should never harm a robot.”

• Bitcoin and blockchain. “I’m not financial,” Wozniak admitted. “I don’t even like to look at bank accounts. I have people who do it for me.”

He says when he first heard of Bitcoin, he didn’t immediately understand the blockchain technology behind it. “Now I do,” he said. “I like the technology because it’s based on mathematics. I’m a mathematician. When my wife and I go to a hotel, I’m more interested in the number on the door than what’s inside the room.”

The moderator asked about Wozniak’s PIN number. He indicated it represented the squares of two numbers—he liked the mathematical relationship.

Wozniak said that one thing that does appeal to him about Bitcoin is that there is a finite quantity of the virtual currency, because it is based on mathematics. He contrasted this with dollars, the actual amount of them in circulation worldwide being unknown “for political reasons.” He said he didn’t like the impression that if your Bitcoins are stolen, that there is no recourse.

The volatility of Bitcoin does concern Wozniak. “Gold is still worth gold,” he explained, and if you own a house, no matter what the market price, you can still live in the house.

Blockchain’s distributed ledger approach appeals to him for many applications, he said. These range from the origins of “conflict minerals” to music rights ownership.

“I can use the watch to tell it to send my wife a quick email that I’m walking the dog,” he said.

While Wozniak spoke highly of Apple Pay, recently expanded, he noted that Android tap and pay was available two years before Apple devices gained that ability.

Looking to the future

Wozniak made an interesting observation about Apple’s own history that resonates in banking today, as there is more talk about open banking in this country, and the imposition of elements of it Europe and the United Kingdom

Apple had a strong following for its own products from the beginning, he says, because “we were making the computer easy, compared to other people.”

Had he and Jobs been right in their conception of where computers would go, however, much of what we take for granted today wouldn’t have happened, Wozniak maintains. Apple was initially wrong about that, and about the iPhone.

Explaining, he said the iPod came between the computer and the iPhone, and when a version of iTunes was created that would run on PCs in addition to the original version for Apple computers, a platform was created. Suddenly anybody who wanted an iPod could load music on one, even if that was their only piece of Apple hardware. This set the iPod apart from other MP3 players of the time.

Initially the only apps available for the smartphone were those offered by Apple itself. Wozniak noted that the universe of iPhone apps, and complete new industries based on them, only began to develop once Apple opened up its platform.

Absent that shift, “none of that stuff that really changed how we live our lives” would have come to be. The soft design of the iPad—enabling creation of buttons as needed by apps, rather than confining functionality to hard physical buttons—also made a difference.

“When people used to ask what Apple did to most change our lives, I used to say it was the iPhone,” said Wozniak. “But now I say it was the third-party app store. Let others take it where they can, but build the platform.”

That’s an interesting concept as applied to the banking industry. Among the voices that have spoken of banking as a platform that could be profitable in its own right, rather than an exploited set of “dumb pipes,” was the 2017 World Banking Report by CapGemini and Efma. [Read “How APIs will change retail banking”]

The report encouraged the formation of banking-fintech partnerships using APIs (application program interfaces). A quote from the CapGemini/Efma report from our earlier story suggests a twist on the App Store, almost.

“APIs form the basis of partnerships with nimbler fintechs, allowing banks to shed their traditional sluggish approach to technology and begin embracing creativity and customer-focused innovation.”

The moderator asked Wozniak about the role of the tech and social media brands in the future of retail financial services. How would he feel, she asked, about a “Bank of Apple”?

“I like more diversity,” Wozniak said. “I’m not so sure I’d would like Apple to have a bank.” He said he sees more cooperation between banks and Apple, working together to reduce friction, as much more likely.