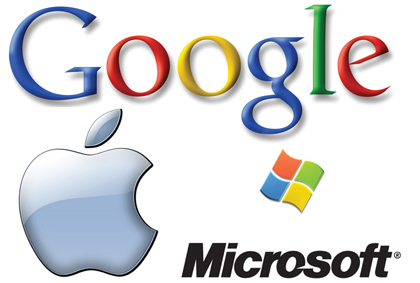 A little-publicized but highly intense battle among the top technology companies could affect the continuing development of mobile banking and mobile payments, according to Accenture research.

Its recent report, Competing in a High-Tech Industry ‘Superstack,’ claims that mobility, cloud computing, and consumer electronics companies are being heavily impacted by a new business model it dubs “superstacks.”

As the top three tech companies involved—Apple, Google, and Microsoft—grapple with each other for control, other industries, including financial services, will have to monitor the situation and ultimately make fundamental decisions on how to proceed with their own technology plans, Accenture Payment Services Senior Executive Matthew Friend tells Tech Topics.

The battle is being fought in the technology sector through mergers and acquisitions, acquisition of intellectual property, access to talented individuals, and continuing research and development, Accenture says.

“Competing in the superstack arena is a matter of survival as the high-tech industry moves full-throttle in this direction,” says Mitch Cline, managing director of Accenture’s Electronics and High-Tech Business.

“Fueling new business models in health care, financial services, and retail, mobility is by far the most powerful and biggest game-changer creating the need for superstacks,” he says. “With mobility superstack battles now spreading to enterprise and consumer markets, the implications are profound for all high-tech players.”

Players in other industries, including financial services, are beginning to feel this tension primarily in the mobility area, Friend says. At some point, he says, financial institutions will have to start asking some crucial questions. “As it pertains to mobility, are financial institutions going to . . . take a risk and stay agnostic to operations on all three platforms [Apple, Google, Microsoft]? Or are they going to join into that superstack consolidation and avoid the risk of potentially getting shut out by trying to stay agnostic?”

Extending that thought, Friend says, “Financial institutions want ubiquitous access to all platforms because their customers are all over, while technology companies are taking a different tack and actively consolidating their superstacks . . .

“Financial services verses technology companies—there’s a great compare-and-contrast of what’s happening there now verses what the impact is going to be down the line.”

Access the Accenture report at https://newsroom.accenture.com/news/superstacks-spreading-throughout-mobility-enterprise-and-consumer-electronics-markets-accenture-research-finds.htm
[This article was posted on May 29, 2012, on the website of Banking Exchange, www.bankingexchange.com.]