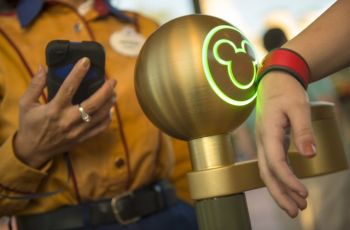 It was appropriate that D&H’s 2014 Connections client conference was held in the Walt Disney World Swan and Dolphin hotels, in Orlando, Fla. Key topics at the bank technology company’s three-day conference were big data, integration of systems, and digital payments, all of which were on display and in use within the grounds of the sprawling Disney complex.

The mega entertainment company has spent several billion dollars installing a highly sophisticated system of entry, identification, payments, and more based on RFID (radio frequency identification) and big data technologies that are top-of-mind topics for banks, as well.  (RFID is the precursor to, and closely related to, NFC—near field communication—used in card and mobile payments.)

Most of the 2,000 people attending the D&H event likely ventured forth to visit the Magic Kingdom, Epcot, or the other two theme parks within Walt Disney World. There  they could see first-hand Disney’s MagicBands being worn by the majority of the park visitors, who come from all over the world, from all backgrounds, and all age groups.

The colorful wristbands have embedded RFID chips. They serve as hotel key, park entrance pass, FastPass card (Disney’s system to help manage line waits), and payments device for just about anything within the entire park. They even facilitate downloading images taken at various Disney PhotoPass locations.

If there was any doubt about people being willing to use advanced identification and payment technology, and to allow information about them to be shared (within limits set by the user), a day at WDW would dispel that.

What you can learn from Disney

Banks, of course, are not theme parks, and they represent an industry, not one corporation, so the model isn’t perfect, but it’s a vivid example of what can be done.

D&H Chief Executive Officer Gerrard Schmid made a comment during his convention remarks that relates closely to what Disney has done. He said that today’s customers expect more from financial institutions (and by extension, their technology partners).

“All of us are being held to new standards of convenience,” he said. He added that banks are not only compared to each other but to companies outside the industry. “People expect the same experiences from us as from Apple or the makers of Android devices.”

Clearly the 50 million-plus annual visitors to Walt Disney World have such an expectation for a convenient integrated experience.

Connections 2014 was the first conference bringing together all the business lines united under the D&H brand. At the 2013 conference in Nashville, the acquisition of Harland Financial Solutions by Canadian-based D&H had been announced but not closed, and so the event was focused largely on Harland Financial’s core systems, and its many applications including LaserPro, EZTeller, and Cavion. This year, D&H’s Mortgagebot and Compushare brands were fully integrated into the program.

Further, dozens of partner companies exhibited at the conference. D&H has approximately 7,000 bank and credit union clients in the U.S. and Canada.

CEO Schmid told the attendees that the company’s capital investment this year will total between $50 and $55 million, about two-thirds of it for technology innovation. He said he expects total bank technology spending to increase 5-7% over the next few years.

While few, if any, bankers would suggest that banks should not be regulated, many have had more than their fill of regulations since the Dodd-Frank Act passed. Gerrard Schmid acknowledged this burden in his client conference remarks, noting that the final RESPA and Truth in Lending rules are due in 2015.

There are long-term consequences from a heavy burden of regulation, the CEO observed. The negative ones typically get most of the attention, understandably.

Yet there are some benefits, Schmid pointed out. Acknowledging the risk of what he was about to say, he nevertheless stated that “regulation may be the mother of innovation.”

“Government regulation inspires great innovation,” he said. He pointed to all the hybrid and electric cars now on the road. What spurred that innovation? he asked. It was the heavy smog blanketing urban California in the 1960s, which spawned that state’s strict anti-smog rules. The automakers developed alternatives to traditional products because they had to, said Schmid.

“So regulation is not necessarily a bad thing,” he said. “It helps industries think outside the box.”

More in this category: « Focus on fees? Or fees for focus? “I work for a hedge fund and I hate myself” »
back to top