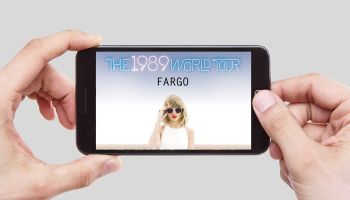 Interesting question, a funny story, and yes, she can, but it goes beyond just Taylor!

Recently, our daughter and friends attended a Taylor Swift concert, and dad was the driver. No problem, I drop them off, I pick them up! Sound familiar? Yeah, I feel a country western song comin’ on! Right?

Dissed, as in “disconnected”

As they were being seated I received a few text messages about how much fun they were having and a pic. Soon the activity tapered off and I assumed the concert had started.

Later I drove back to the Fargo Dome and found a spot closer to the event than previously planned. So, I sent them a text telling them where I was waiting. Soon I received a text saying they were on the way.

After about a 15 minutes I received a call asking me where I was. Of course I immediately launched into the “didn’t you read my text message lecture” and she responded, “But I didn’t get one!”

Really? C’mon! You know the drill!

Signals thick enough to ride on

This was a “saturation event.”

You had 21,000-odd fans who for two-plus hours had been flooding the cellular system with text messages (SMS), selfies, tweets, and anything else you can imagine.

The result: Social media and the mobility generation rendering an area of the city’s infrastructure ineffective.

Think about it. This group unknowingly saturated the cellular system with an adverse result. By the way, the text message I sent the night before was received … during breakfast the next morning.

In context, if all you had was a cell phone, no landline (which is the trend today), you were the “In Case of Emergency” or ICE listing on your son or daughter’s phone, and someone needed to get in touch with you, could they?

That is a huge question.

From mobility to dead zone

More importantly, this was just one event. For those individuals and businesses who live or are located in the surrounding vicinity utilizing the same cellular infrastructure as the Fargo Dome, every time there is a significant event at the dome, the situation repeats itself.

Any large event from the marathon, football game, or concerts will impact this area. These are predictable events, but this is a perfect example of how susceptible our infrastructure really is.

The risk pertains to first mile and last mile communications. Cellular systems send or receive from the closest cell tower to the cell phone and back again. If that tower is full (saturated), then …

• Text messages will go to a buffer and be sent later

• And pictures may never be sent.

Outbound, you may receive a busy signal or an “all circuits are busy now” message.

In emergencies, is cellular all you’ve got?

As fun as the concert was, the reality is that we oftentimes rely on systems that are unreliable, and we are not aware that the infrastructure we are depending on is designed to operate under most conditions—not extreme conditions.

Can your organization afford to receive a message nine hours after it has been sent?

The point: in a disaster, you don’t have time! Now is a good time to review your infrastructure and be certain it is properly designed with adequate capacity and resiliency. Because in your case if it is not there when you need it, you won’t be able to “Shake it off.”

More in this category: « We have an app! Surveyed your internet vulnerability? »
back to top