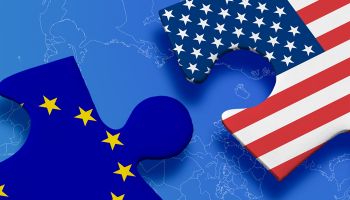 Digitization, disruptive technologies, payments trends, and outright challenges from nonbank institutions ought to sound familiar to U.S. bankers—and those are at least some of the trends Europeans face…

… at least, according to some recent notices and analyses, admittedly selected somewhat at random, but nonetheless a snapshot of what’s going on with our neighbors across the ocean.

A BearingPoint Institute survey of 48 European banks finds that all are pursuing digital solutions for various departments, processes, and customer services. The most common goal for these traditional banks is cutting costs, however. Few are realizing the growth opportunities that digital offers.

For example, only 17% say they have achieved a high degree of digitalization for their retail business, yet 91% say retail banking is the most important area to leverage digital technology. While 95% of these banks acknowledge that being the first to introduce digital technology provides first-mover advantage, most describe themselves as “second movers.”

“Banks need management that understands the advantages of digitalization and has a broad and holistic view of how to deploy technologies throughout the organization. Banks need to see digitalization as an opportunity for growth and to improve services, rather than only as a way of cutting costs,” says Robert Bosch, partner at BearingPoint.

Accenture announced the selection of 15 innovator financial technology startups in its annual FinTech Innovation Lab London. Represented in these groups are blockchain applications, cognitive computing, and biometric security systems. (Note: Accenture runs similar labs through the year in the U. S., Hong Kong, and Dublin.)

“Adopting disruptive technology is a priority for the banking sector and collaborating with startups through initiatives such as the FinTech Innovation Labs is an important part of this process for Deutsche Bank. Better and faster platforms can drive productivity and enhance the customer experience,” says Kim Hammonds, COO and CIO at Deutsche Bank, one of the 16 financial institutions agreeing to mentor the startup finalists.

Six of the finalists chosen will be selected to present at an investor day in April in front of venture capitalists and senior financial industry executives.

Just to name a few of these participants:

• AimBrain, which is developing a mobile-focused biometric authentication platform.

• Crowdaura, which uses blockchain technology and a crowdfunding interface to provide marketing.

• PayKey, which allows banks to operate through social media channels.

RBR, a financial trends analyst organization based in London, shows in a recent survey that the payment cards market throughout Europe is still growing despite some markets in the region approaching maturity.

The increase, RBR says, has been mainly in debit cards as a result of more people entering the banking system, but growth has been notably strong in the prepaid sector in Western Europe, and in charge cards in Central and Eastern Europe.

By the end of 2014 [the latest data available] a total of 1.5 billion payment cards were in issue across Europe, up 2% from the year before.

Of the 31 countries covered by RBR’s report, 23 saw an increase in the number of cards in circulation over this period—12 in Western Europe and 11 in Central and Eastern Europe.

Just this month, Orange—formerly France Telecom, S.A., a multinational telecommunications company based in Paris which now boasts about 230 million customers—announced it had initiated negotiations with French financial services provider Groupama.

The goal, according to Orange, is to acquire a 65% stake in Groupama Banque, a multichannel online and mobile financial institution established in 2003 as a subsidiary of a large and widespread holding company.

According to IDC, Orange plans to offer all standard banking services as well as savings, loans, and insurance services. The organization’s objective is to gain €400 million in financial services revenues in 2018.

“Thus, we expect Orange to enter the French banking services market as a disruptor: a mobile-only bank taking a new approach that is more in tune with the increasingly mobile-centric way in which people live their lives … By combining its experience in mfinance services and its trusted brand with a radically different operations model, Orange might soon start to look like the Uber of banking—first in France, and then elsewhere too.”

Does any of this sound familiar?

Tagged under Technology, Blogs, Making Sense of it All, Payments, Feature, Feature3,

More in this category: « Blockchain to wearables, 2016 means change There’s gold in them thar mobile payments »
back to top