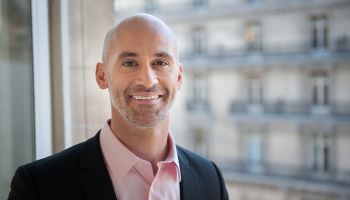 Bank of the West’s John Finley has spent a decade at the organization in customer experience, digital channel, and innovation roles.

Bank of the West is expanding a program that began with pairing fintech startups with portions of its commercial banking operation. The bank is accepting applications from fintechs, chiefly those based in the U.S., through mid-May.

The expanded Finlabs program is designed to pair promising young fintech firms with specific challenges facing parts of the bank beyond commercial banking. John Finley, head of innovation and customer journeys at Bank of the West, says the bank is looking for “growth-stage” fintechs, firms that have made it past the raw concept stage who are ready to find practical applications for their technologies.

“We’re right in the heart of San Francisco and of Silicon Valley,” says Finley. “So we couldn’t be better placed.”

The initial advantage for selected firms will be the ability to have real market experience and fast feedback for iterative development. They will also have access to the worldwide BNP Paribas organization, thus going beyond the walls of Bank of the West.

Finlabs, overseen by L’Atelier BNP Paribas, the innovation arm of Bank of the West’s parent company, will evaluate applications initially. Firms selected from the initial group will compete in pitch sessions that will determine the final selection for this year’s program. L’Atelier BNP Paribas functions as an internal consultant, working with both Bank of the West and the outside fintechs. The internal consultancy has offices in Paris, San Francisco, and Shanghai.

Each finalist firm will work with a segment of Bank of the West to solve a specific banking problem. Those challenges are already posted on the Finlabs website, along with the bank leaders that the fintech selected will be working with.

There is also a “wild card” category called “Surprise Us!,” which invites those fintechs which don’t fit any of the business areas’ challenges to try out. The site promises a shot at being paired with other parts of the organization that might be able to use the firm’s help. 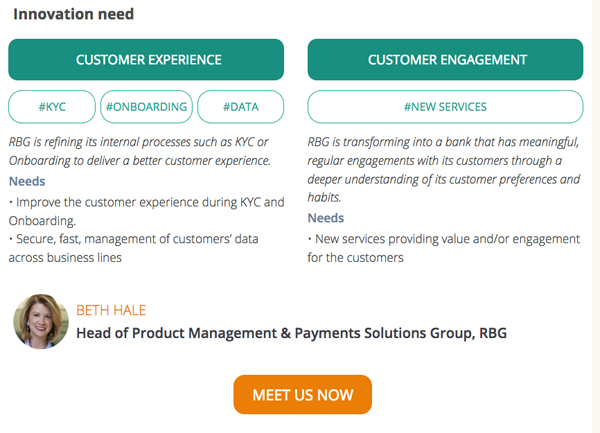 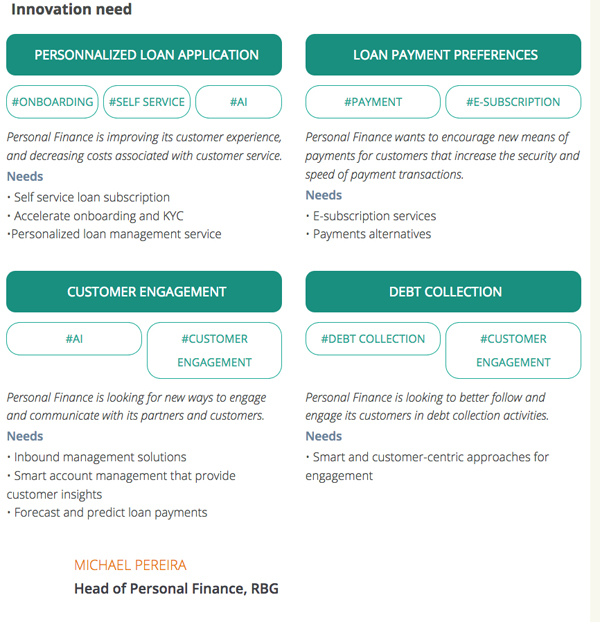 Samplings of the developmental efforts for which Bank of the West is seeking assistance from fintech companies.

Once a fintech has been selected for the program, a four-month pilot phase will commence. In January 2019 the bank plans to decide whether to go further and commercialize any approaches developed in the four-month period.

Get to know banking

Participating fintechs will not be charged for being in the program and Bank of the West will not be infusing capital into any of the firms at that stage. Finley said that the fintechs taking part in the bank’s program will be considered vendors, and so will be subject to rigorous due diligence.

In fact, learning how to deal with the sometimes-painful elements of partnering with a bank is an element of what fintechs can hope to gain from being in Finlabs.

“Banking is a heavily regulated industry,” says Finley, “so we have to vet the companies that we work with.”

The hoped-for result of the first stage will be a pilot program or a proof of concept project designed to be a live experience for the fintech’s approach. Finley says that at this stage fintechs wouldn’t be required to give the bank any exclusivity, although in the future deals resulting from the firms’ participation in Finlabs could involve exclusive rights to the technology.

Beyond Bank of the West’s walls

Finley notes that the new program is just one of the ways Bank of the West has been developing new financial technology. Other efforts include participation in tech consortia, including the Plug and Play Tech Center based in Silicon Valley, which claims to be the world’s largest startup accelerator. Aspects of the multi-functional center of interest to banks include fintech, insurtech, internet of things, cybersecurity, and real estate tech. The bank also participates in the R3 and Hyperledger consortia.

While the bank does a great deal of looking outside to find partners and ideas, Finley adds that it will be beefing up its internal efforts as well. Employees will be encouraged to propose new ideas and those with winning suggestions could be among the team members tasked with accelerating these concepts.

With Finlab, “the two should complement each other,” says Finley.