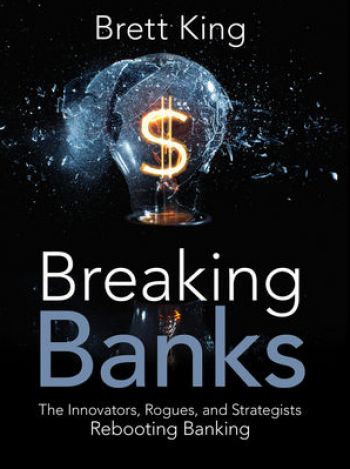 Every banker should read this book.

That is, if they would gain a clear understanding of banking’s rapidly changing face.

Rapid change is not something bankers are used to, though increasingly that typifies the “new normal.”

Paul Volcker himself claimed, in December of 2009, that the last great innovation in banking was the ATM machine. True, the essentials of banking have remained largely unchanged for the past 100 years. But in the short time since Volcker made those comments, much in banking has begun to change at a very rapid pace. This makes it difficult for both bankers and regulators alike to adapt.

Brett King’s latest book comprises a series of interviews with individuals who are providing “traditional banking services”—to your customers and mine and outside of the banking sphere.

They define why they think their product is attracting customers from our banks.

As a banker, it is extremely difficult for me to admit it—but, in many cases, they are right.

King, an international banking consultant and something of a banking gadfly, has been painting a very different picture of the future of the industry in his series of groundbreaking books. A year and a half ago, I reviewed King’s BANK 3.0: Why Banking Is No Longer Somewhere You Go, But Something You Do, and the pace of change he described there just keeps picking up. BANK 3.0 was an upgrade of King’s own BANK 2.0.

The introduction of the internet has caused a paradigm shift in banking, consumer behavior, and bank products and service distribution methods. King asks if banks will be able to change.

“It is entirely possible that banks, with their heavy regulatory burden, high capital adequacy requirements, massive legacy infrastructure, and long-held conventions, may just have trouble adapting to these tectonic shifts,”  King writes.

The good news is that King does believe that if bankers begin to accept the innovation and implement it into their own institutions, they will be able to compete in the future. The bad news is that he believes that in the short-term that while large banks will be able to compete with innovation, the approximately 6,000 other institutions with under $1 billion in assets are at risk.

Smaller institutions—my own institution is under $200 million in assets—have always believed that they would be the preferred choice of the customer. That is, so long as they provided lots of convenient branches; product offerings like credit cards, loans, and mortgages; plus the ability to visit in person with a banker—all under the umbrella of outstanding community bank customer service.

As King’s interview subjects demonstrate, many of today’s customers prefer a product delivered to them when they want with as little “friction” as possible.

Limiting the amount of friction a customer has with a product is a constant theme in Breaking Banks. This necessity includes not making a customer come to the bank to open a new account, and making mobile banking easy to use and fast. Even if you have a mobile banking app, if you don’t make them fast, you risk the customer will move on to another, faster provider.

In the past, payments became complicated because there was no other way to provide for the safe transfer of large sums of money. Checks evolved as the solution to facilitate the transfer of valid funds from one party to the other. Today the value that is emerging from the new payment paradigm is knowledge and context, not the facilitation of the payment itself. Two-thirds of the checks being written today are issued in the U. S. and the number of checks is down to about 5 billion a year, from 17 billion in 2000.

So what is taking the place of checks?

Obviously debit and credit cards facilitate payments, but there are many nonbanks that have moved into this space. PayPal, Dwolla, Square, Venmo, LevelUp, M-Pesa, Alipay, and others are creating very simple payment transfer mechanisms that are gaining wide use.

The traffic at bank branches is declining at the same time mobile banking is exploding. If you are a retail bank today in the developed world and you don’t have a smartphone app, you are an exception.

What if Amazon were just a catalog?

King sees a critical problem with the way banks design websites. Almost all banks have a site, but most don’t allow the website to generate revenue. It is only a source of information and interaction.

King likens this to Amazon making its entire catalog available on the Internet—but requiring you to go to a store to make the purchase.

“By the end of this decade, based upon the decline in branch activity today, retail banks in the United States are going to have to deliver at least half of their revenue via web, mobile, and tablet to remain viable,” King predicts.

Banks are going to have to figure out ways to work with the compliance departments to make this kind of banking approach a reality.

Not that some aren’t already setting a pace. Several U.S. banks have figured out how to use the internet to their advantage. USAA Bank’s Neff Hudson, vice-president of emerging channels, was interviewed to provide insights on the processes USAA employs. USAA is a member-owned association that serves military families. At USAA mobile banking handles 40% of their customer interactions.

The bank basically has no branches—never has since its 1985 founding—and yet it has grown to $51 billion in deposits.

Social media is providing another platform for banks to interact with their customers. (King himself is an aggressive user of social media and that is part of how he has built and maintained his growing following.) Many banks consider Facebook and Twitter a threat to the integrity of their bank brand.

However, other banks are using social media to converse with their customers and build their brand through the social community. What they are discovering is a bank recommendation from a friend on social media is stronger than any advertising a bank can produce.

The most common uses of social media by banks are for marketing, crisis communication, community activities of the bank, lead generation, customer service, and media communications. Citibank has emerged as a big player in social media and Frank Eliason, director of global social media was interviewed to tell the story of how Citi utilizes social media worldwide. Frank has written a book called @yourservice, which tells his experiences developing social media.

Serving across the generations

One of the most difficult challenges for banks today is to provide a preferred product delivery channel for all ages of customers.

Mature customers still want to physically walk into the bank to perform their transactions.

But the Gen-Y and Gen-Z/digital natives have absolutely no desire to set foot into the bank to perform their banking. They shop, interact with friends, and perform their banking on their mobile device. The online experience is more important to them. So they want an online banking product that is easy to use and fast.

These are our future customers.

FDIC insurance isn’t a big selling point for them. However, they do want help with managing their money. If banks can provide them with mobile tools to do this then they have a chance to have them as a customer. Research has shown Gen-Y customers might go into a branch for their first home mortgage because they feel unsure of themselves, but for the second mortgage loan and beyond they are more likely to use an internet provider.

Competing with the “neo-banks”?

Neo-banks is the term given to innovative new approaches to day-to-day banking, specifically pure-play internet-only banks with a focus on either digital or social approaches.

These usually aren’t chartered banks. Examples include Simple, GoBank, Bluebird, and Moven. (Of the last, King himself is founder and CEO.) All of these companies use prepaid cards for the delivery of their product.

Moven is a mobile app in which you download and then transfer money to the account. You subsequently receive a plastic card and sticker in the mail. The sticker is for tap-and-pay via MasterCard PayPass technology. Customers also have tools that help them manage their money. It gives the customer immediate feedback on their balance after a transaction has occurred and if the customer is on track with their spending and savings goals for the month. All of the goals are entered by the customer, so they feel in control of their spending.

Prepaid debit cards are the fastest-growing deposit product in the U.S. With a 25% year-on-year growth over the last four years, prepaid now amounts to a $300 billion deposit business. Consumers like the fact they won’t overdraw these cards plus the cards have many of the features of a bank account including mobile deposits and mobile bill pay.

Ultimately, all of the products described in this book focus on one theme: Building a product the consumer loves to use with as little friction as possible.

The most successful companies have listened to the customer to develop products they find to be user friendly.

Today’s customer wants to know you are advocating to help them manage their finances rather than charge them a fee for a product you think they need. Transparency on fees is very important.

After I read one of Brett King’s books, I am always uneasy because it makes me realize how fast banking is changing.

Somehow, I think that is exactly how he wants bankers to react.