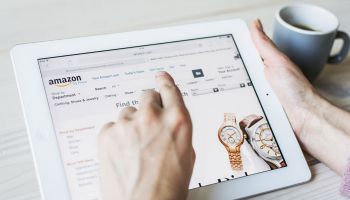 Amazon teaming with a bank to offer checking means more than it seems on the surface.

Reports that Amazon is looking to develop new checking accounts, with a specific target on underserved customers and millennials, is unsurprising.

Those still in denial that Amazon wants to expand—and the key word is expand, as it already offers financial services—can no longer deny the trend that large data players and tech titans want to win over the hearts, minds, and deposits of consumers and small businesses.

Do a reality check

Data, trust, and scale. These are often cited as the three core elements to “winning” in financial services, with the implication being that banks have these in abundance. So too do the tech titans—more so, I would argue.

Potentially partnering with an incumbent also removes another worn argument that these firms don’t want to get a bank license, or be regulated as such. They don’t need one— even though some actually have got them already—to create the financial services that customers want to use.

Just look at the bank statement of any 20-something. You’ll increasingly see the rich spending data from a millennial’s daily life that formerly showed up giving way to fewer, bulkier transactions: Venmo payments, transactions via Apple Pay, PayPal transfers, and a credit card bill paid off monthly in exchange for customized rewards.

Maintaining an insular mindset in the face of the digital and data revolution has led to the underwhelming yet ubiquitous “me-too” innovation attempts of many banks.

They nod to millennials with their mobile apps, sure—but poor functionality means those apps take twice as long to log in to and do not provide the instantaneous notifications that smartphone users expect.

Spending data can appear days after a transaction occurs, while monthly statements offer no insights or tools to manage records, analyze spending, budgets, or save for the future.

All of which is to say, millennials may tolerate banks, but that is not the same thing as the banks offering them what they actually want or need.

Similarly, banks also refuse to adapt to the realities not just of the way that many people use a bank, but how they live. Thanks to the gig economy and distributed workforces, millennials are more likely than previous generations to be peripatetic and both earn and spend money in more than one country.

In other words, in a world where data is currency and a customer-centric experience is king, banks are lagging behind.

Banks continue to obsess about their existing industry competitors because all of this fintech innovation is antithetical to the product-push focus that banks have had for decades.

If you think about the new types of competitors, fintechs are dismissed as a single issue—when what they actually are is consumer-obsessed and focused on specific pain points.

Meanwhile, the threat that tech titans pose through their massive investment in owning consumer data and the rails on which it runs, and the interfaces used to interact with them, is still largely ignored.

This looks an awful lot like a bank balance with one-click pay, which incentivizes customers to spend with the benefits a bank-issued card might provide. With Amazon Pay Places customers can pay for in-store and order ahead shopping experiences using their Amazon app rather than with a card, cash, or even checks—where they’re still used—using their Amazon account information.

Amazon also provides online merchants with the ability to add a button on their websites’ checkout pages that lets shoppers pay via their Amazon account information. The idea there is that by doing so, customers are more likely not to abandon carts and that checkout moves more quickly.

So there you have funding, payments, credit, and lending facilities for small- and medium-sized enterprises all within one ecosystem.

Banking as a Service?

The tech titans are approaching financial services not as a series of products to be pushed but through the prism of service, and they are doing it in a way that works for them and their business model. This includes the use of APIs, which Amazon, Facebook, and Uber already have a much firmer grasp on than banks and other financial services companies.

The tech titans have the brand, they have the service, and they have the data. The Amazons and Googles have already figured out the tech foundation and the ability to mine the vast swathes of data they hold. Now they are applying it to find and serve under-served individuals.

Amazon’s logistics and delivery infrastructure, as well as its access to personal data about purchasing habits and patterns, places it in a unique position. Far more so, I would argue, than Google.

Amazon has the insight, the infrastructure, and, most importantly, the vision to build and deliver, at scale, the next generation of financial services. It also has a shareholder base that expects growth, and a service-centric ethos that makes people want to take up their latest offerings.

With that power, it can reimagine what financial services looks like through adjacency at scale. You can easily foresee how Amazon will be able to:

• Comingle data from its various services to meet un-met or under-served needs.

This will take into account cashflows that Amazon can see through historical data and project into the future—including tracking against similar businesses on Amazon marketplace.

Shape of finance to come?

Working with an incumbent could be a win-win for both partners. I believe we will see many more of these types of announcements over 2018, as both the tech titans and banks look to new ways of working to serve new generations of customers, including those that have historically been locked out of traditional banking.

Dr. Beaumont creates markets, enables scale, and drives growth, with a passion for the intersection between technology, financial services, and the public sector. She has worked with blue chips, start-ups, investors, and everything in between to grow companies and create value.

Read "Banking with Amazon? Sure"