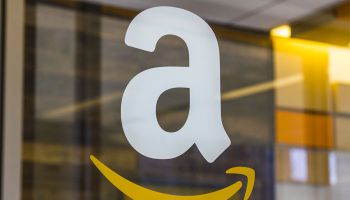 With an Amazon-big bank “check-like” account in the headlines, a recent survey of consumer interest in an Amazon bank account and Amazon loans is very relevant.

The research arm of LendEDU had the right idea. In fact it was prescient.

Six days before The Wall Street Journal broke the story about several large banks reportedly being in talks with Amazon to create a “check-like” account, LendEDU—a 2014 startup that describes itself as "an online personal finance marketplace"—released the results of a poll of 1,000 consumers it conducted Feb. 23-24 indicating that roughly half of current Amazon users would use an Amazon-created bank account as their primary bank account.

The online survey was conducted by Pollfish among consumers who had bought something on the Amazon site within the previous 30 days. Respondents were asked if they were Amazon Prime customers (the retailer’s premium package). Prime customers comprised 62.3% of the 1,000 respondents, who were all 18 years of age or older. There were enough instances where the difference in response between Prime and non-Prime customers was significant that LendEDU broke out results for both.

For example, in the question about using an Amazon-created bank account, 44.5% of all respondents answered “Yes,” whereas 52.33% of Prime users said “Yes.” The actual question consumers were asked was: “If offered, would you be open to the idea of using an account created by Amazon as your primary bank account?” As the chart below shows, only 16.4% of all respondents would not be open to the idea and 39.1% were unsure. 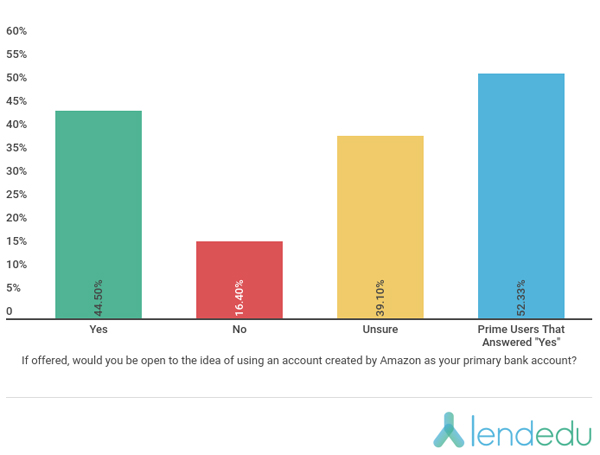 Trust not a problem

LendEDU research analyst Mike Brown wrote in his article covering the survey results, “It makes sense that a good proportion of Americans do not want to be the guinea pigs when their money is at stake.

“That being said,” Brown continued, “it does not appear as though trust is a big problem for Amazon. A combined 87% of respondents answered with either ‘yes, very much so,’ or ‘somewhat’ when asked if they trusted Amazon to always have the consumer’s best interest in mind.” 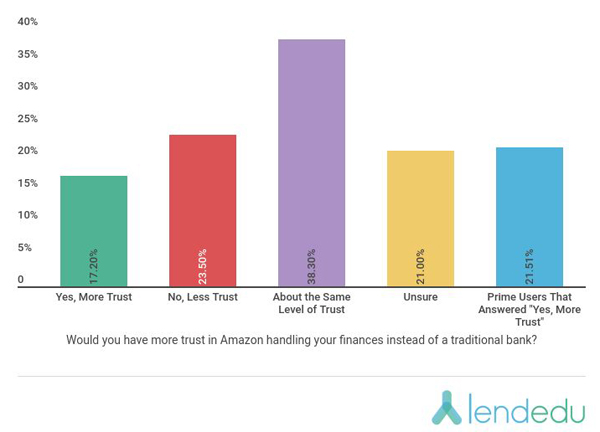 In all the media coverage about the possible partnership between JPMorgan Chase, Capital One, and other large banks with Amazon, the point was made that Amazon appears not to be considering becoming a bank. The Seattle-based company has not responded to our requests for confirmation of the current rumors and other information, but the consensus among various commentators is that there are policy and regulatory questions that would need to be settled for such an account to become reality.

[One point that has been raised is that Amazon and other tech giants would prefer not to become banks, lest banking regulators then be able to influence their non-financial businesses. Last year then-Acting Comptroller of the Currency Keith Norieka spoke at length about revamping the longstanding separation of banking and commerce. When new Comptroller Joseph Otting took office, in a meeting with reporters he made it clear that he would not be taking up Norieka’s suggestions on that front.]

Nevertheless, the LendEDU survey hints at the vast potential Amazon has for a deeper dive into financial services beyond its Amazon Lending and Amazon Pay ventures.

Aside from a primary banking account, the survey asked if consumers would be willing to use personal, mortgage, or auto lending products if Amazon were to offer them.

The respondents were most likely to use Amazon for personal loans, according to LendEDU. A majority of them, 50.3%, answered “yes” to that, as shown in the chart below. 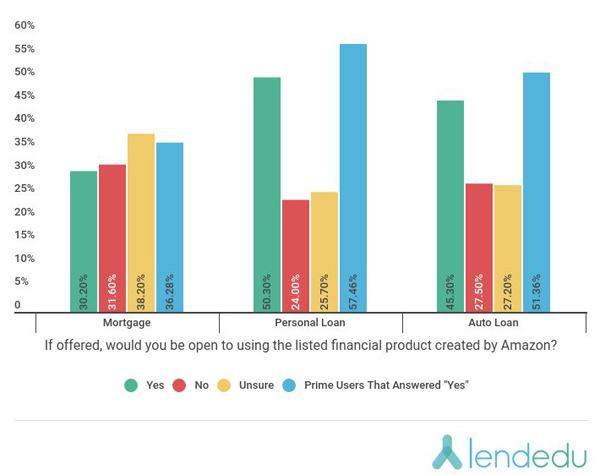 Consumers were least likely to use Amazon for a mortgage loan—only 30.2% were willing to try—while interest in Amazon-offered auto loans was in between. For all three loan types, Prime customers were more likely to be willing to try an Amazon loan.

Yes, to an “Amazon Coin”

Other services the survey queried consumers about included three types of insurance products, a credit monitoring product, retirement savings, a robo-investment app, and even an Amazon crypto-currency.

With the latter, an amazing 51.7% said yes to using a future “Amazon Coin” for purchases on Amazon.

At the end of Mike Brown’s recap article on the LendEDU site is a full list of the questions and responses.