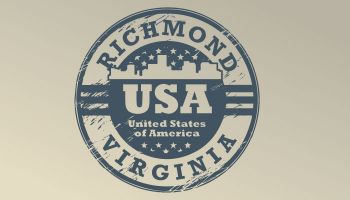 A number of banks are looking to expand in Virginia's Richmond metro area with the aim of taking market share from larger players, including those currently involved in mergers.

Why Richmond has such appeal

Banks eyeing expansion in metro Richmond have been attracted to the stability of Virginia's state capital and its favorable market demographics, particularly when looking at the potential growth in high net worth households. Richmond is home to a number of universities, including Virginia Commonwealth University's School of Medicine, the largest medical school in the state. The area also benefits from the most recent Base Realignment and Closure Commission, or BRAC, developments. 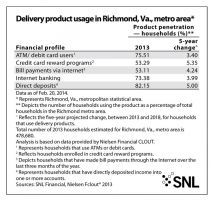 The Richmond MSA never experienced the same build-up as many other areas in the Southeast and did not suffer as severe a downturn when the housing bubble burst. The market has entered the recovery stage more quickly, drawing attention from out-of-state players and banks operating in rural markets that see metro Richmond as an opportunity to generate assets at a time when loan growth has proved elusive.

Advisers in the market say that the competition for loans in the Richmond MSA has been fierce over the last few years, with large banks putting pressure on loan yields. Some of those banks are gunning for business they hope to gain from potential fallout arising from Union First Market Bankshares Corp.'s recent merger with StellarOne Corp.

Union First aims for “firstest with the mostest”

William Beale, president and CEO of Richmond-based Union First Market, expects that newer entrants looking to build their presence in Richmond could introduce some irrational pricing in the marketplace. However, Beale remains confident in Union First Market's ability to maintain its market share. The company, aided by its merger with StellarOne, held the No. 5 market share position in the Richmond MSA, with $1.63 billion or 8.77% of deposits as of June 30, 2013. Behemoths Wells Fargo & Co., BB&T Corp., SunTrust Banks Inc., and Bank of America Corp. held the top four spots in terms of deposit market share.

At a recent investor conference Beale noted that Union First Market has more than 20 lenders and 40 branches in the marketplace, while newer entrants in the Richmond market often have just a loan production office or a single branch location and a handful of lending officers. 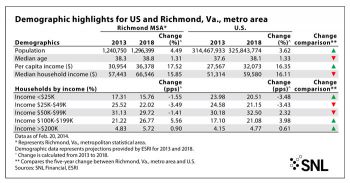 le said Union First Market does not plan to continue pricing products as aggressively as StellarOne did in the Richmond market. He said StellarOne was an "irrational competitor," particularly in Richmond, where it undercut other banks on pricing—an approach that showed in the bank's margins.

Beale encouraged analysts and investors to model future growth rates based on Union First Market's legacy growth rather than StellarOne's historical growth, but he also noted that the combined company's large size would offer opportunities to win new commercial lending business. For instance, he noted that the company recently had the opportunity to look at a nearly $40 million credit. Although it did not ultimately book the business, he believes Union First Market will see those opportunities again in the future. 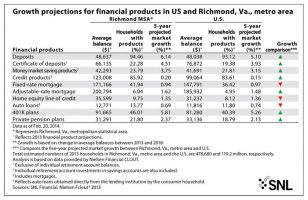 Other banks are not standing idly by. For example, Park Sterling Corp. recently entered the market and hired a commercial banking team and two former StellarOne executives to head up its wealth management and mortgage banking operations.

Mortgage rates in the Richmond market are just below the national average, while the household penetration of fixed-rate and adjustable-rate mortgages in the area is above nationwide averages, according to data from SNL and Nielsen. The market could also present wealth management opportunities, as a higher percentage of households in the Richmond MSA have 401ks and private pension plans, compared to the rest of the U.S.

Analysts following Park Sterling have expressed confidence that the Charlotte, N.C.-based bank will be able to win new business in the Richmond market.

"We suspect [Park Sterling] will be able to gain share in the market, with the newly-hired bankers likely charged with bringing over a healthy portion of their former books of business at former-StellarOne (which should be busy going through an in-market integration with [Union First Market] in coming quarters)," Sandler O'Neill analyst Kevin Fitzsimmons wrote in an early January report.

Fitzsimmons further noted that Park Sterling might have considered growing in the area through acquisitions, but any deal likely would not come cheap. Advisers following the market noted that there simply are not many potential targets available in the Richmond MSA.

Some banks outside the Richmond market have already expanded in the area through acquisitions. C&F Financial Corp. purchased Powhatan, Va.-based Central Virginia Bankshares Inc. in October 2013. The deal helped grow its deposit base in the metro Richmond market by more than 70% from year-ago levels. When announcing the deal, C&F Financial made clear that the acquisition offered a unique opportunity to grow in the market.

"We will have a greatly enhanced presence in the growing Richmond area, enabling us to expand our personal and commercial customer base, while offering more products, locations and services to both C&F and CVB customers," C&F Chairman, President and CEO Larry Dillon said in the release associated with the deal announcement.

Kilmarnock, Va.-based Bank of Lancaster recently expanded in the Richmond market, as well, with plans to open a loan production and wealth management office by the end of February.

The Bay Banks of Virginia Inc. unit had 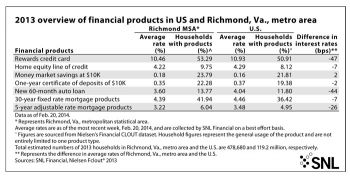 hoped to expand in Richmond for some time, and saw the opportunity when it hired F. Arnold Blackmon III, formerly an executive vice-president and director of the commercial real estate group with StellarOne in Richmond, to serve as its Richmond region president.

Randal Greene, president and CEO of Bank of Lancaster, said that many of the bank's customers have second homes in Virginia's Northern Neck, but have primary residences in the Richmond area. He believes that Blackmon can establish a significant presence in the market, which will allow the company to better serve those customers. 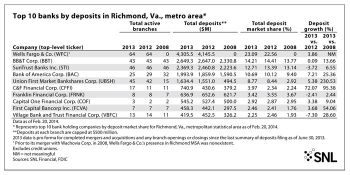 knows what we are trying to accomplish and is building a strong team with expertise in commercial lending, mortgage banking and wealth management," Greene said in a release.

Whether newer entrants will be successful in Richmond remains to be seen, but they almost certainly will find that banks with deep roots in the market are unlikely to give up share without a fight.