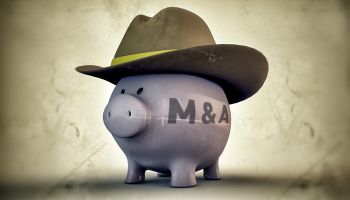 Though other states have seen higher average pricing on some larger deals, Texas continues to be the standout M&A market among banks, according to an SNL analysis.

The analysis demonstrates the continued strength of Texas, which has been viewed for much of the cycle as the leading market in the banking industry.

The state avoided much of the worst of the financial crisis and recession, and many of its institutions performed strongly in its aftermath as the state's economy outpaced the recovery throughout much of the rest of the country. That has made it a hotbed for deals, a trend that is once again evident in 2014.

Six states have seen better pricing on an average price to tangible book basis, but many of those states' pricing numbers hinged on one or two higher-priced transactions.

The Texas deal market was comprised of a far larger number of deals—20—than any other state. Furthermore, it boasted six deals that were larger than $25 million during the period. That was also the highest total for any state through July 23, according to SNL data.

Although Texas did trail a handful of other state markets in pricing, it still averaged a price to tangible book ratio of 176% for deals larger than $25 million. That easily outpaced the nationwide pricing average, which was 156% of tangible book value across 52 deals of that size or larger through July 23, according to SNL's analysis. 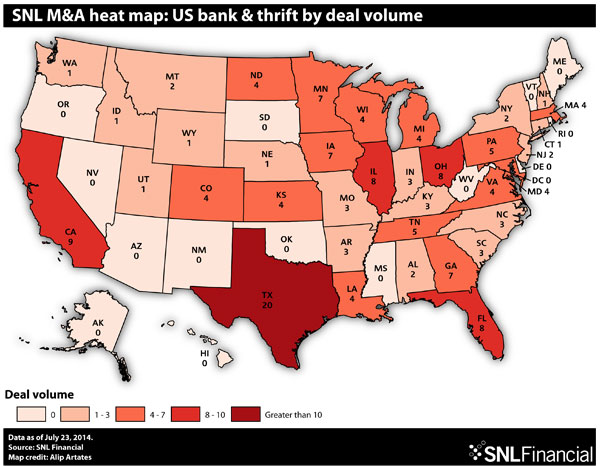 New Hampshire posted the highest average pricing—216% of tangible book—of any state market, followed by Missouri, which had an average of 212% to tangible book. Both of those states’ averages hinged on a signal deal, however.

There were just three deals in Missouri this year as of July 23, and only one larger than $25 million that qualified under SNL's pricing data analysis. That transaction was Pine Bluff, Ark.-based Simmons First National Corp.'s ($4.33 billion) purchase of Springfield, Mo.-based Liberty Bancshares Inc., a roughly $206.90 million deal priced at 212% of tangible book.

In New Hampshire, the only deal that qualified was Boston-based Eastern Bank Corp.'s $134.4 million deal for Bedford, N.H.-based Centrix Bank & Trust, announced March 4, which was priced at about 216% of tangible book value.

The high number of deals in Texas reflects not only the strength of the state's economy, but also the presence of a number of institutions that have embarked on acquisitive strategies and put cash and currency to work across the state. Independent Bank Group Inc. is one such bank—the company has inked eight deals since 2010, including three in 2013, and a $48 million dollar deal for Houston City Bancshares Inc., valued at about 197.0% of tangible book, which the companies announced June 2 of this year.

About two months before announcing that deal, Independent Bank Group Chairman and CEO David Brooks predicted that the state's market would stay active, and that his company would continue to talk to bankers looking to sell.

Brooks argued that the abundance of banks in the market with less than $250 million in assets—institutions feeling challenged by both a harsher regulatory environment and a low interest rate environment, among other factors—meant that there would be plenty of bankers struggling to maintain profitability who could entertain a sale.

The largest deal in the state during the period was Tyler, Texas-based Southside Bancshares Inc.'s $313.9 million deal for Fort Worth, Texas-based OmniAmerican Bancorp Inc. ($1.39 billion), which had a price to tangible book ratio of 147.1%. 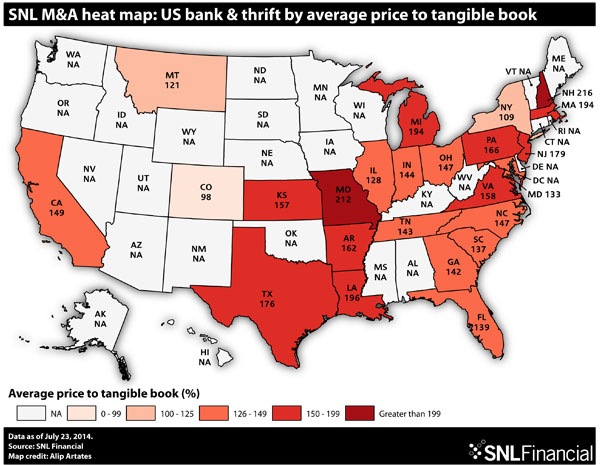 The next highest number of deals was in California, where nine transactions occurred through July 23. Deal prices for mergers with a value of more than $25 million in the state averaged 149% of tangible book, and there were four deals announced of that size in the state during the period. The largest by far in the state, and across the country, was CIT Group Inc.'s massive $3.37 billion deal to acquire IMB HoldCo LLC, the parent of OneWest Bank NA.

Florida, Illinois, and Ohio followed California, as each state saw eight transactions. Though larger transactions in Florida were priced at an average of just 138.9% of tangible book, there were five deals of at least $25.0 million in the state, bringing it in just behind Texas.