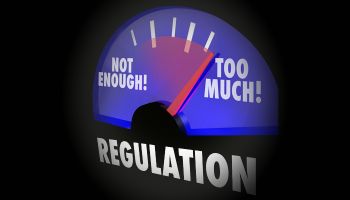 “I’m often told that the world has become more complicated, that we have too many banks in the U.S., and that we cannot go back to less-complex and more-straightforward regulation and rules and great supervisory judgment.”

So summarized Esther George, president and CEO, Kansas City Federal Reserve Bank, in a speech at a joint Federal Reserve-Conference of State Bank Supervisors meeting on Sept. 23. And she concluded (italics added):

George traced the recent history of regulatory expansion and its impact on banks of all sizes—every community banker knows the litany by now.

George finished and stated that: “Community banks are not smaller versions of the country’s largest banks.”

If bank regulation is to succeed, she said, “policymakers must understand how these commercial banking business models operate and why a locally owned community bank is not the same as a branch of a systemically important financial institution in meeting the credit needs of the local community.”

In a notable part of her speech, George made three key observations:

1. Rules are increasingly prescriptive and complex.

“However, the value of this complexity is questionable,” she said.

Now the stress is on data, econometric models, and measurement, in the name of systematic regulation and objective regulation, she said.

“For the enhanced supervision of the country’s largest banks, this approach has been considered highly successful, for example, in making assessments about capital adequacy under stress test scenarios,” said George.

This has not been the case for community banks.

There, George said, “the substitution of rigid rules for examiner judgment has altered the supervisory process without adding value and has instead created higher costs of compliance.’

3. In consumer compliance regulation, “I worry that the pendulum has swung too far.”

“To be sure, regulation has an important role to play in consumer protection and fair access to credit,” said George. “Those protections should not be diluted, especially for banks that rely on model-based consumer lending.”

However, George said that she keeps hearing from community bankers that compliance exams “have taken a more prosecutorial tone.”

For banks that live by relationship lending, she said, “the regulations and the focus on identifying specific undesirable products seems to run counter to the requisite subjectivity that underlies the strengths of community bank lending.”