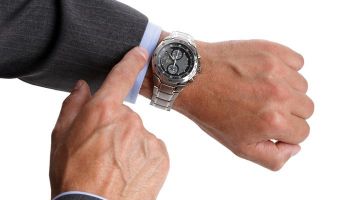 The deal between Buffalo, N.Y.-based M&T and Paramus, N.J.-based Hudson City was announced in August 2012 and is expected to close by the end of 2014. Most analysts believe the deal will ultimately close, but noted that lack of certainty has caused investor apprehension toward both companies.

FBR Capital Markets analyst Bob Ramsey told SNL he still has "reasonable confidence" that the deal will close. "But obviously every day that we move forward and don't have some degree of clarity around the BSA/AML issues, the tougher it gets," he said.

And the longer the situation remains without clarity the tougher it gets to indefinitely postpone the deal.

"There's definitely anxiousness on the part of investors," Ramsey said. That is because the situation boils down to a regulatory issue that neither company has control over. So ultimately it does not matter if both companies are committed and doing what they need to do to close the deal. "At the end of the day it comes down to regulators," Ramsey said. "It's something you can't handicap effectively."

During M&T's second-quarter earnings call on July 17, CFO René Jones refused to estimate when the company's deal with Hudson City would close.

The companies in December 2013 said that they needed more time to obtain a regulatory determination on the applications necessary to complete their proposed merger. Dec. 31, 2014, is the date after which either party may elect to terminate the merger agreement if it has not yet been completed. Jones on Oct. 17 stopped short of saying whether the Dec. 31 deadline is a drop-dead date for the deal.

Hudson City and M&T declined to comment for this story. 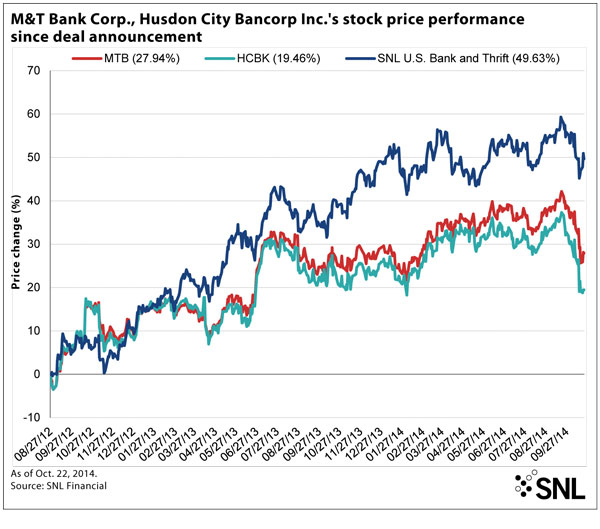 Ramsey said Hermance's death has had no impact at all on the deal as Salamone is of the same mindset that Hermance was, and both men were engaged in the deal process. Janney Capital Markets analyst Sameer Gokhale told SNL he agrees that the change at the top for Hudson City will have little impact on the deal. It introduces a little uncertainty, but the deal still makes sense for both parties, he said.

Gokhale said he remains confident that the deal will close because if there were tangible items that could halt the deal they probably would have surfaced by now. "I can't imagine why the deal wouldn't close," he said. "I would imagine that regulators have pretty clearly specified what they need M&T to do in order to complete the transaction."

While Gokhale believes there is a strong probability that the deal will be completed by the end of the year, he acknowledged that there is a real possibility of it extending into 2015.

He said there is anxiety in the investment community, but investors generally view M&T as a high-quality bank. And because the issue is at least somewhat in M&T's control, investors believe the bank will be able to meet the regulatory requirements to complete the deal. "While there is some nervousness, I would say that generally investors do expect the transaction to go through," he said.

Other acquirers have had delays

M&T is not the only bank that has faced deal delays over BSA/AML issues. A number of sizable transactions have been extended due to concerns over BSA/AML compliance, but none have faced so long a delay as the M&T/Hudson City transaction.

Ramsey said BSA/AML issues are a current focus for regulators, and the M&A process is a time when regulators can put a little more pressure on banks to accelerate changes that need to be made. He said there has been some pressure on would-be buyers to wait to deal until their processes are in top form.

So if the deal does get completed, it would put M&T in a position of strength because its process will have been fully revamped and have been reviewed.

"At that point they could in many respects become an acquirer of choice because you don't have that same sort of overhang of what are regulators going to think about their BSA/AML process," he said.

M&T wants to have a best-in-class BSA/AML program with or without Hudson City, according to Ramsey.

RBC Capital Markets' Gerard Cassidy offered a similar assessment at the SNL Bank M&A Symposium earlier this month. Cassidy said that M&T now has data aggregation systems that are better than other banks of similar size. The veteran analyst believes that other banks will need to invest and improve their systems to levels similar to M&T if they wish to withstand regulatory scrutiny on deals. 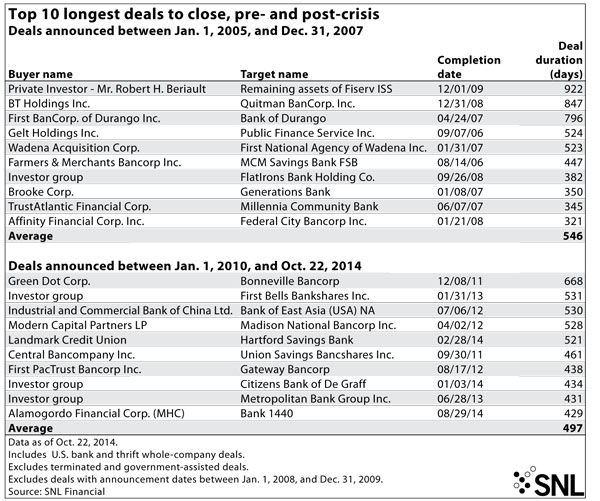 Gokhale said that if the M&T/Hudson City deal does not close, the news would be negative for the entire banking sector as there seems to be plenty of consolidation opportunities due to the stronger balance sheets many banks now enjoy.

"Banks are in a tough spot. Many banks have excess capital that they can't return to shareholders, so they're really trapped," he said. Investors might be hesitant to invest in a sector that has to deal with "irrational" regulators, Gokhale said. "I do not think the regulators want to spook the markets just by giving the impression that they're being unreasonable or irrational," he said. For M&T, investors would likely wonder what else the company could do if M&A is taken off the table. 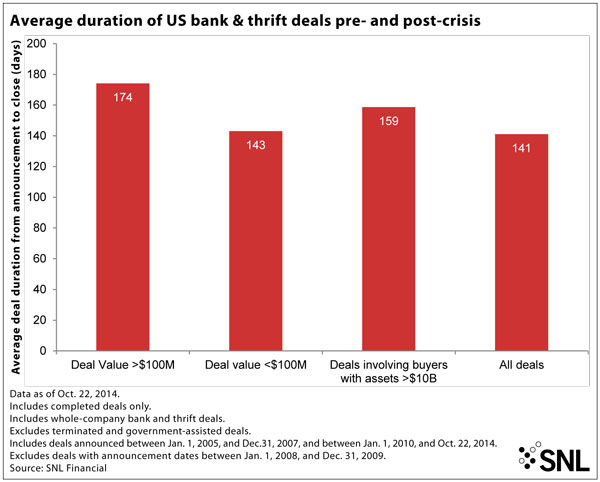 There are two schools of thought on the deal's potential long-term impact, Gokhale said. First, it is a lesson in how regulators can hold up a deal indefinitely. But, secondly, because M&T is one of the best-run banks in the country and is basically being given a blueprint for what needs to be done to complete the deal, it could be used as a guide by other banks wanting to do M&A, Gokhale said. If completed, the deal will provide more certainty in terms of what regulators are looking for and what work banks need to do, he said.

Ramsey said that if the deal does not close, there would be a correction in M&T's stock because the bank is getting good earnings from the transaction. In the long-term, the company would continue to do what needs to be done to satisfy regulators and would still be able to do deals down the road. "But it just makes that path a lot rockier," he said.