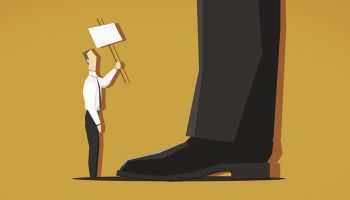 Many community banks feel the need to grow larger to compete with large banks. M&A on the small end of the industry hierarchy continues to be the solution. A recent PwC report explores this trend.

The overall bank and capital markets merger and acquisition climate last year was the equivalent of a drought. With one exception: While deal value and volume overall dropped precipitously in 2016—by 48% and 32%, respectively—the ongoing consolidation at the smaller end of the commercial bank sector remained active, continuing the trend of 2014 and 2015, according to PwC’s Banking & Capital Markets Deals Insights: 2016, released in January.

“The majority of deal activity was concentrated among the smaller banks,” the report notes. “Regulation is inhibiting acquisitions by the larger banks, and, with a continuing low interest-rate environment and high regulatory cost, it appears that the notion of ‘too small to survive’ has become the new paradigm for small- and medium-sized banks.”

Number of M&A deals by size 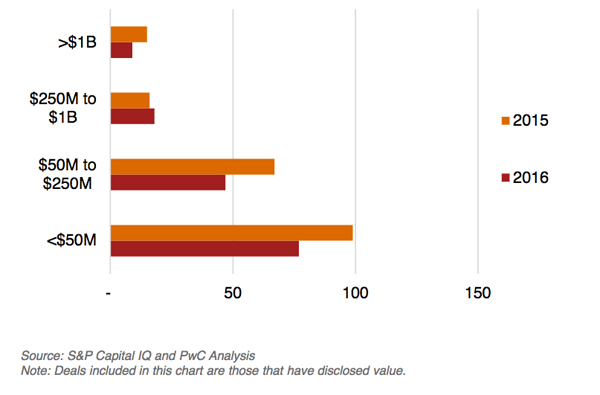 The latter are being driven to combine to achieve sufficient growth and scale to help reduce the burden of increased compliance costs, the PwC report notes.

Promise ahead, but when?

Bank stock prices shot up like a rocket following Donald Trump’s election as president in November. The higher prices give acquiring banks increased currency and could facilitate more deals, according to bankers. Daniel Klausner, PwC’s capital markets advisory leader, points out that the higher prices were predicated on three assumptions: interest rate increases, rollbacks of regulations, and a stronger economy.

“All of that has to come to fruition,” Klausner says. PwC Deals Practice Partner Dennis Trunfio believes the macro trends of the past year will continue through 2017 and beyond—few deals overall with the bulk of the deals at the smaller end of the scale.

The report spells out why: “With the new administration and Republican-led Congress, small institutions can expect supervisory requirements to ease up, and the largest banks are likely to see fewer enforcement actions, too, but the changes may not come into immediate effect in 2017. As a consequence, we expect the ‘too small to survive’ trend will continue among smaller banks and larger banks will likely sit tight. . . .”

Regarding rates, again, increases will have a positive impact on banks’ profitability, but the report’s authors don’t think the increases will be significant enough to alter the need for smaller banks to consolidate.

Both Klausner and Trunfio agree that size, per se, is not the answer to bank viability, and that there is no absolute size hurdle in any event.

“One institution of $250 million in assets could be too small to survive,” says Trunfio, “because of its level of margins and costs, and its footprint.” Another bank, he maintains, with different funding and a greater focus on digital banking, for example, could do well at the same size.

“Simply increasing size is not necessarily a recipe for success,” Trunfio adds.

This article originally appeared in the "Threads" section of the February-March 2017 Banking Exchange magazine.