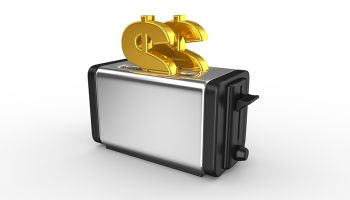 We’ve not had to think very hard about core deposits for a few years.

We’re still awash with liquidity. Money is just parked in consumer and small-to-medium-sized businesses’ checking accounts for want of any ability to earn a rate of return.

With rates on checking deposits running at incredibly low rates often what’s been the urgency?  Some very large banks earlier this year even began to charge depositors a fee for simply holding the deposits on their books.

Any of us in the business for more than the last six or seven years remember the days of stiff competition for deposits. (Some of us even remember the older days of the toaster, and other consumer items once used to attract new accounts.)

Competition then meant vying both for the deposits themselves and for the rates we paid on them.

Back when basis points mattered

Retail depositors would go across the street for as little as an eighth of a point (that’s 13 basis points!) more in rate. Remaining competitive on deposit rates became urgent. There were some occasionally very imaginative ways of pricing—and reporting on our pricing—what we were paying only a relatively few years ago.

In fact, at many good-sized banks a two-tier pricing system on deposits—the street rate that you could look up in the paper and the private rate, the rate individually negotiated with each good-sized customer. And the latter rates were invariably higher. We all did our share of that over the years, as it was critical to maintain core deposits. They were still almost always cheaper than brokered money or so-called “hot money” deposit sources.

Loan-to-deposit ratios at most community banks were in the 65% to 75% range as a generalization, 15 and 20 years ago. Some LTDs rose higher, of course, while others were lower.

But generally back then, the target ratio was set in a relatively narrow range that reflected the liquidity risk preferences of an individual bank’s owners. Rate was usually sufficient to maintain the ratio at the desired level.

With the end of the Federal Reserve’s quantitative easing last week, we all now anticipate that market rates of interest will increase. Most bankers that I talk to have been positively gapped for several quarters, having expected rates to move upwards long before now.

Whether the credit markets will experience higher rates as a normal progression of our economic recovery or whether they will be “nudged” higher by the Fed is not at all clear.

But the anticipation is that rates will go up.

And even with the false starts over the last year, many believe that the climb will come sooner than later.

Don’t hide in your vault—get moving!

Rather than passively await the new rate environment, there are five strategies I think all community banks can and should adopt in preparation for the shift.

1. Be clear about what core deposits are.

Functionally defined, they are all FDIC-insured deposits from customers with whom we normally have face-to-face dealings. They are exclusive of all insured brokered deposits.

The face-to-face nature of the customer relationships are important as deposits from “friends” and close business acquaintances are considered to be more “sticky” than those deposits from strangers or others we know less well. It’s a behavioral characteristic that’s emphasized and it is not a statutory definition.

2. Apply this manner of thinking to all funding sources.

That makes sense, as the customer behaviors are likely to be very similar. Such sources can, for example, include Federal Funds purchased. These funds are often tied to long-standing correspondent banking relationships.

Why not use this time period ahead of the upward shift of market rates of interest to cultivate these upstream and downstream relationships? Indeed, perhaps it’s time to formalize them into some sort of written liquidity commitments.

3. Turn the telescope around for some fresh thinking.

While you are thinking about funding, also consider an effort to identify a portfolio of larger loans within your overall loans outstanding for possible sale to correspondent banks.

Large loans of high quality should be relatively easy to participate for liquidity reasons. This would give provide additional flexibility in our efforts to retain sufficient core deposits at attractive rates to satisfy both our net interest margin and our liquidity management objectives.

4. It’s imperative that each bank has an effective account and household profitability system. If you don’t have one, get to work on this right away.

Too often smaller community banks naively believe that they know their customer base well enough to be able to distinguish profitable relationships from unprofitable ones absent a formal system.

My own long experience has taught me that we are not necessarily infallible judges of who is profitable and who is not. We need to know the answer to this urgent question definitively. Should liquidity become a significant issue as this current business cycle unfolds, we must protect our profitable accounts from encroachment by competitors, especially where the rates paid on deposit relationships will be decisive in maintaining the long-term relationship.

5. Review your policies and practices on lending commitments.

Too often in the past, oral comments casually or informally made turned into binding commitments to fund loans.

We need to be precise in issuing commitments and ration them to the best of our credit risks and to use them strategically for business development and deposit retention purposes. They are also a source of fee income that we should not overlook for want of a specific policy.

We’ve faced all these issues before. The difference today is that they are likely to come at us at warp speed. We need a plan.

More in this category: « UBPR: Underused risk management tool that’s free What’s your bank’s future look like? »
back to top