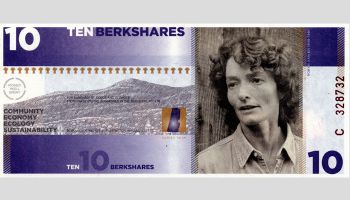 You can buy ten of these BerkShare notes, featuring Robyn Van En, a local ag movement pioneer, for $95—a built-in disount good at Berkshires-area sellers. This article originally appeared in "Idea Exchange" in Banking Exchange magazine. We'd like to hear about new ideas that your bank is trying. Email [email protected]

BerkShares, the local currency, was introduced in 2006 by the Berkshires-based Schumacher Center for a New Economics as a project in sustainable economics. Consumers and businesses can go to 16 branches of four community banks in the region to purchase or redeem BerkShares, a paper currency featuring local scenery and portraits of famous area figures.

BerkShares sell at $0.95, but are accepted for $1.00 in value at over 400 area businesses. So $95 buys B$100. The intent is to keep capital in the Berkshires region. About B$134,600—equivalent to roughly $127,900—is circulating, says Alice Maggio, director of programs at the Schumacher Center. A total of B$1 million was initially produced by an area printer.

BerkShares exist only as notes—federal law doesn’t permit private coinage—and thus far haven’t been brought into the digital world. “Paper is a strong part of BerkShares’ identity,” Maggio explains. Using the physical BerkShares, only accepted locally, “shows the decision regarding where you are spending it when you hand it over,” she says. Adopting a BerkShare debit card would add outside organizations that take processing fees, she adds, defeating the program’s purpose by removing money from the region.

Chuck Leach, president and CEO of $335 million-assets Lee Bank, says community banking is a strong tool for doing good for a local economy, and “BerkShares plays into that.” Lee has been involved in the program for several years. Tellers sell and redeem local currency. Each participating bank maintains a no-fee, noninterest-bearing checking account for BerkShares.

“By taking part, we’re putting a stake in the ground to say, ‘We’re here to support you,’” says Leach. Indeed, Maggio says that out-of-area merchants have never connected with BerkShares—their scope makes them a bad fit. But BerkShare holders can use B$s at a variety of merchants, many oriented toward food or dining. Also, local retailers are well represented. Each month, a company that accepts the currency is featured in an online article and radio spot.

BerkShares taps into the “buy local” trend. “Locally owned businesses do a lot more for a local economy,” says Maggio, who grew up in the Berkshires and returned after college. Spending BerkShares underscores where the money goes.

Maggio says merchants can accept BerkShares as best fits their circumstances—customers essentially receive a 5% discount on their dollar-denominated prices. Some merchants may take them on a given day of the week. A tire center that participates, for example, accepts local currency for labor charges (up to B$100), but not for tires because it can’t use BerkShares to buy inventory.

Merchants accumulating BerkShares can spend them with other participating merchants, producing what Maggio calls the program’s “multiplier effect.” But when they need dollars, they can redeem BerkShares at any participating bank.

Taking part requires some training and extra processing time at the banks. (Account holders can transact freely, but noncustomers must provide identification that satisfies Know Your Customer rules.) Each year, the BerkShares organization provides cooperating banks with a letter attesting to their aid for the Community Reinvestment Act file. Leach says this helped his bank in its CRA exams.

“We wouldn’t be able to do what we do,” says Maggio, “without the banks’ participation.” For Leach, being involved with the currency is a natural. He says the bank’s markets are depopulating, and residents are getting older, so that growing his business means taking it from other players like large, nonlocal institutions. “We have to be market takers,” says Leach. The BerkShares program helps.

“We like Alice’s whole approach,” maintains Leach. “She has brought home to the community that economies can be self-sustaining.”