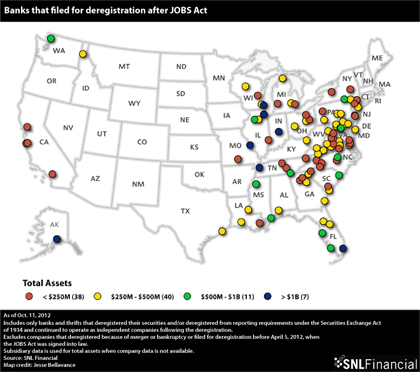 Map shows concentrations in numbers of banks filing for deregistration. Click here or on the map to see a larger version.

Twenty-two more community banks have deregistered their common stock with the Securities and Exchange Commission in the last three months, as small banks continue to take advantage of the JOBS Act signed into law April 5.

In all, 96 banks have filed to deregister since the law took effect, based on SNL-collected data current as of Oct. 11.

The Jumpstart Our Business Startups Act eased regulatory burdens by increasing the threshold under which a bank or bank holding company may terminate registration of its securities.

Under the new law, banks can terminate their registration if they have 1,200 shareholders of record or less. Previously, it was 300 shareholders of record. The act also raised the threshold requiring banking companies to register under the Exchange Act to 2,000 shareholders from 500. [Editor's note: ABA was among organizations that lobbied heavily over several years to achieve this change to the longstanding old levels.]

Geographically, as dramatized by the map, Virginia-based banks dominate the list, with 17 of the 96 filers. Tennessee, North Carolina, South Carolina, Florida, Pennsylvania, and West Virginia share the second spot with five banks each.

SNL analysis indicates that there are 198 publicly traded banks and thrifts in U.S. with fewer than 1,200 shareholders at a record date later than Dec. 31, 2011, that continue to file their securities with a filing agency. These banks have median assets of $678.8 million, and more than half of them have less than $1 billion in assets. 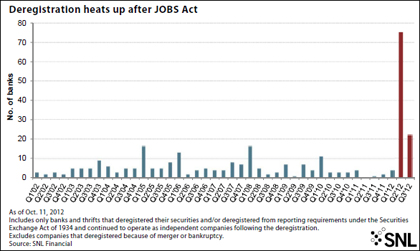 JOBS Act triggers the gush
Soon after the enactment, community banks flooded the SEC with deregistration filings to gain freedom from reporting to regulators and to cut compliance costs. The 96 banks that have filed for deregistration since the JOBS Act is greater than the total number of banks that deregistered in the last 20 quarters before the JOBS Act was implemented, excluding banks that deregistered due to mergers or bankruptcies.

Ninety-five of the 96 banks would not have been able to go private before the law changed, since they had more than 300 shareholders on record.

Most of the banks that have gone private under the new law are small community banks with less than $500 million in assets. Only seven had more than $1 billion in assets. 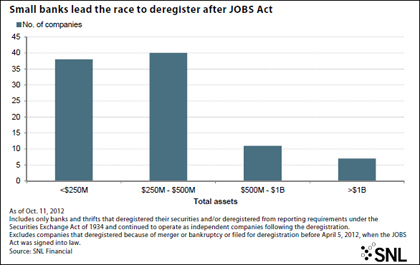 Flow begins to flag
Though more banks are filing to deregister with the SEC, the pace is slowing.

April and May witnessed 26 and 37 filings, respectively. Then the number fell to 12 in June and nine in July. The decline continued to seven and six companies in August and September, respectively.

Kilmarnock, Va.-based Bay Banks of Virginia Inc. filed to deregister May 11 but withdrew the application Aug. 8.

Most of the deregistering banks have plans to continue to trade on the over-the-counter markets, and they have assured investors that financial information will continue to be available on a timely basis through company websites and regulatory filings such as call reports.

How specific banks have handled shift
Mifflintown, Pa.-based First Community Financial Corp. filed a Form 15-12G on Sept. 28 to deregister its common stock with the SEC. In a Form 8-K filed on the same day, the company said:

"SEC registration comes at a considerable cost to the Company with little appreciable benefit to our shareholders. Importantly, we do not believe that deregistration will significantly affect trading in Company common stock, which will continue to trade over the counter and be quoted on the OTCQB Market Tier of the OTC Markets."

It also said it would provide annual reports in accordance with GAAP as well as quarterly reports of its financial performance. The company expects to complete the deregistration process in the first quarter of 2013.

Another company to file for deregistration in September was Princeton, Ill.-based Princeton National Bancorp Inc. In August, its unit, Citizens First National Bank, was notified by OCC that the bank has become "critically undercapitalized" and it received a prompt corrective action directive. Princeton National has reported net losses in seven of the last eleven quarters, having lost $101.4 million in total. Two months before the deregistration filing, the company switched to the OTCQB market place from the NASDAQ due to noncompliance with the minimum requirement of $10 million in stockholders' equity. Its stock closed at 19 cents per share on Oct. 12, 93% down from the year-ago level. 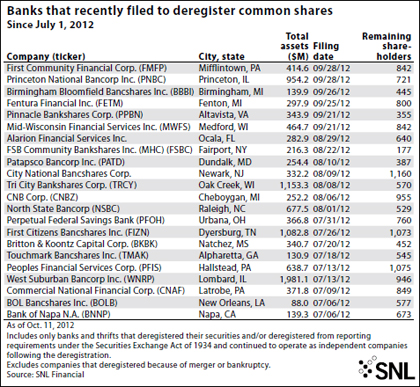 "We expect to generate a substantial reduction in annual costs associated with this decision and it will allow senior management to focus resources on the core operations of the Bank, opposed to meeting the filing requirements of the SEC," CEO Rob Farr said in a Sept. 28 press release. The company will continue to provide quarterly and annual reports to shareholders.


[This article was posted on October 26, 2012, on the website of Banking Exchange, www.bankingexchange.com, and is copyright 2012 by the American Bankers Association.]