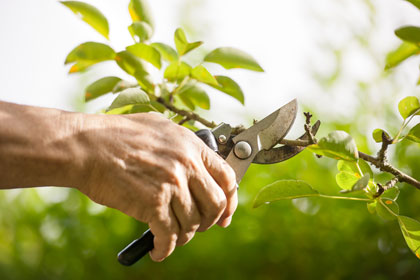 Branches are being closed at an unprecedented rate. Since the onset of the economic downturn in mid-year 2008, the net number of bank branches nationwide has declined an unprecedented four consecutive years by an aggregate of 2,346 offices, to total fewer than 83,000 branches today.

Bank of America, Hancock Holding, KeyCorp, Old National, among a host of others, all have announced that substantial numbers of underperforming offices will be consolidated or otherwise shuttered. Mega institutions--including PNC and JPMorgan Chase--are deploying state-of-the-art in-branch technologies and enhancing social media marketing to mitigate the impact of declining branch traffic. FirstMerit, who recently announced a $1.3 billion acquisition of Citizens Republic, earlier this year eliminated the branch position of assistant manager in an effort to substantially reduce branch operating expenses.

Even small community banks, which generally avoid the "big bank" approach to reducing service, are taking a second look at their branch networks for expense reduction opportunities. This comes in the wake of in-branch transaction volumes that are declining annually by as much as 10% in some institutions. 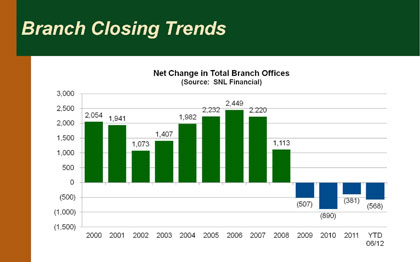 For a larger version of this chart, click here or on the image.
Branch economics rapidly evolving
Even were traffic not falling off, sobering numbers make a review of your branch system imperative.
Declining trends in overdraft fees, interchange income, and service charges, and an interest rate environment that will constrain improvements in net interest margins will severely hamper topline revenue growth at most branches. Couple this with rising regulatory costs, rising capital requirements, and other costs and you have a very disconcerting outlook for overall branch profitability.

Today almost 20% of all branches open three years or longer hold less than $15 million in total deposits. Despite a four-year decline of 478 offices, there remain more than 15,000 offices in this category. Although deposit totals are not the sole basis for determining overall branch profitability and efficiency, further reductions in branches are likely in the near future. And many of these smaller offices will be the first to be evaluated for potential consolidation or closure.

Even the smallest of full-service facilities require three to four FTE's simply to open the doors every day. Total operating expenses can range from a minimum of $250,000 annually to as much as $500,000 or more, depending on benefit levels, management structures, marketing, information technology, occupancy, and other costs.

The outlook may be even more daunting when factoring in the potential impact of Basel III capital standards for community banks. Bankers will become increasingly mindful of branch underperformance as more capital is required to be allocated to individual branches. 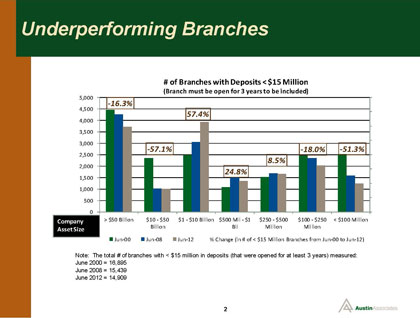 Bankers' branch action priorities
Given the near-term bleak outlook for many bank branches, what steps should community banks consider to improve branch network profitability and efficiency?

The starting point should be an evaluation of the profitability contribution of each of the bank's existing branches. For banks utilizing an existing profitability analysis system, this is a relatively simple process which includes looking at both the product and customer profitability of each branch.

For banks without a history of tracking branch profitability, a process will need to be deployed that looks at the balances and rates in place for all loan and deposit products at each branch. This will need to build in factors such as the cost of funding branch loans; a credit for funding rate for each deposit account; and a reasonable assignment of operating expense for each branch loan and deposit product.

From this information, a calculation of branch-by-branch profitability can be prepared. Reports should summarize the profitability contribution of each branch to the overhead costs of the bank as a whole, in terms of dollars of contribution, ROA, and ROE.

Branches that have a contribution rate greater than the bank-wide average may be looked at from an improvement standpoint, but would generally be deemed to be free from the branch closure analysis process. These represent candidates for efficiency and profitability improvements.

Branches that are contributing at less than the average rate to bank-wide profitability and that are covering less than their fair share of overhead expenses should be considered for further evaluation. Other factors may dictate solutions besides closure in the end, but such offices will likely, ultimately, be subject to a branch closure analysis.

A word of caution is appropriate here. A branch once closed is difficult, if not impossible, to restore. A thorough analysis is essential prior to closing an office. While it is true that branches have traditionally had a great intrinsic value for most community banks, this value proposition appears to be diminishing.

That said, the task of management is to determine the optimal time to close a branch. Delaying the decision impairs the improvement of bank-wide profitability.

On the other hand, you do not want to close a branch too early in its lifecycle as long as it is making a positive contribution to the bank as a whole.

A solid way to scrutinize branches
Your first task is to rule out those branches that shouldn't be considered for closure. To that end, consider if it has been a while since all branch operating expenses have been subjected to a thorough "zero-based budgeting" exercise. This may have been either as part of your annual operating budget preparation process, or as a part of a major operating expense efficiency analysis. If not, you may be wise to perform such analysis prior to determining which branches will be deemed as "permanently underperforming" and ultimately subjected to the branch closure analysis process.

In a similar fashion, each branch initially labeled as "currently underperforming" should first be evaluated to determine if the revenue elements of that branch (primarily composed of net interest margin and fee income generated) are operating at optimal capacity. If a reasonable expectation exists that significant top line revenue growth may occur within 12-36 months, no further analysis may be necessary.

Upon completing these two "rule-out" phases of the analysis, you should by now have achieved a sense of confidence that you have appropriately identified any permanently underperforming branches that should be the focus of your analyses.

First, ask which hard-dollar operating costs can be discontinued, never to return?

Second, ask that, if this branch is closed, what business volume will be permanently lost, never to return?

In looking at operating expenses to be permanently shed, you should combine salary and benefit costs of staff at each branch with occupancy costs that can be eliminated, along with any other non-salary costs that will become unnecessary and which can be eliminated if the branch is closed.

Attempting to determine the potential for permanently lost business resulting from the branch closure decision includes assessing factors such as availability and convenience of the bank's next-closest service locations. This analysis should take into account such factors as ATM locations, remote deposit capture capabilities, courier services, and bank customer service usage patterns. While this portion of the analysis can be daunting, it can be simplified by performing a breakeven analysis on the potential for lost business that can be covered by the hard-dollar cost savings determined to be achievable in the prior step.

Getting ready to pull the plug
Branch closure shouldn't be taken lightly. In many community banks, closure will be disruptive to bank employees, customers, and the local community. Community bankers contemplating closures should take five steps prior to implementing a closure, including assessments of:

1. The branch market's viability: Is there upside potential for generating new business or does the bank have all that it is likely to get?

2. Product usage and needs: If our bank customers are not using three to five services, or if we have a mismatch in what the bank offers versus what customers need, would stronger ground-level marketing be a solution to improving branch profitability, rather than closure?

3. Managerial oversight: Branches rarely, if ever, succeed long-term without effective leadership from the branch manager, the office's support team, and bank-wide branch administrative leadership. Are you firing on all cylinders, here?

5. The overall view: Has the contribution of individual branches to overall bank profitability been considered?

Following a process such as the one outlined above can bring a bank the sense of confidence that a thorough analytical process has been followed that achieves the bank's goals of maximizing bank-wide performance in an efficient and profitable manner.