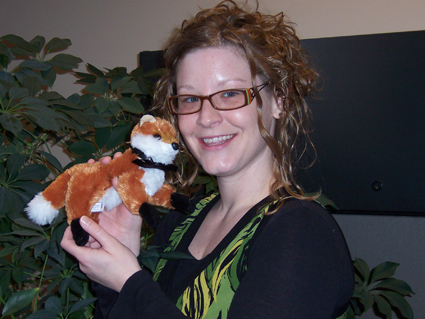 That’s no fox stole, but on occasion Fox River State Bank finds that “FReSBY the Fox” disappears. The bank’s mascot, held here by Erin Anderson, marketing coordinator, has been helping the Burlington, Wis., bank dip a toe into social media with Facebook.
Kids—of all ages—find treasure hunts and scavenger hunts irresistible. And Keith Pollek, president and CEO, had been looking for a low-key way to increase the bank’s visibility through social media, as a tryout for the technique. Enter “FReSBY the Fox.”

The $100 million-assets bank, named for the nearby Fox River, has given out stuffed foxes as an incentive for children to open kids club accounts. Recently, the bank decided to hold a contest to name this mascot. The young winner observed that if you took the bank’s initials—FRSB—and put in a couple of vowels—FReSBy—you had a pretty neat name. The judges thought that made sense and awarded the prize.

Then Pollek and marketing coordinator Erin Anderson cooked up a way to make more of the fox, now that he had himself a personality and a name. Anderson thought the bank might sponsor an ongoing—bloodless—fox hunt.

So, earlier this year, the bank established a Facebook account and began hiding the stuffed toy at local businesses and other locations. FReSBy himself posts clues to his whereabouts on a Facebook page.
Here are some samples from a recent chase:

“Boy was the man surprised when he opened his briefcase and a little fox popped out! He agreed to let me visit for awhile and I'm using my time away to make lots of new friends. Everyone here is a really snappy dresser so I'm super glad I wore my black bow tie. I fit right in!”
“All morning I have been marveling and laughing at the ladies who work here... they are excellent at saying Tongue-Twisters! Every time they answer the telephone, each lady says the same Tongue-Twister. I was just tickled pink over the whole thing and began teasing them how I bet they couldn't say it three times fast. And you know what? They all could do it! Simply amazing!”
“The guys have been all saying what a clever fox I am. They are very impressed over how I snuck away from the bank and how no one has found me yet. (I haven't let on that this escape happened purely by accident!) In fact, the guys think I'm so brainy and sharp... they are talking about making me a partner!” 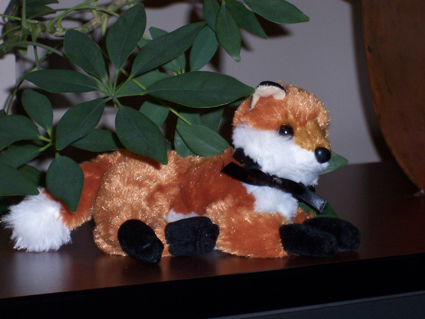 
Now, the gimmick is, the Burlington area has two high schools, Catholic Central and Burlington High. So the bank’s ongoing challenge is for the schools to try to beat out the other at finding FReSBy. A small donation—$25— is made to the school that finds the fox, and a local charity receives a donation of $100 when the fox is found, as well.

Following the clues, students are encouraged to deduce the fox’s hiding place, and, entering the building, declare, “FReSBy is here.”

The first week FReSBy was hiding out at a restaurant, Veronico’s Cafe. The next week, at an auto repair shop, Mike’s Quality Auto.

Have you guessed what kind of business the clues above describe? Actually, the students were stumped the first week the fox was hiding there, too. So the bank left the toy at the same business again.

Here’s the answer, as revealed on the Facebook page:

“I have been gone for so long I didn't think anyone would find me! I did enjoy my time away at Lloyd, Phenicie, Lynch, Kelly, Hotvedt & Terry! Phew... that really is a Tongue Twister! The guys were teaching me a lot about the law and I'm actually not too bad at arguing. If I ever pass the Bar Exam, they might rename their law offices. Imagine this...Lloyd, Phenicie, Lynch, Kelly, Hotvedt, Terry & FReSBy!”

Thus far, the bank’s foxy effort has been solely for visibility and to try out Facebook in an interesting way. It also maintains a main Facebook page that promotes events like the bank’s shredding day.
Pollek says in the future, the bank may try promoting student-related services—such as student loans for higher education. In the meantime, the bank is exploring getting a fox mascot suit ready. No word as to whose job description wearing it will be.

What has your bank tried in social media? Tell us about it below, and tell us how well it worked