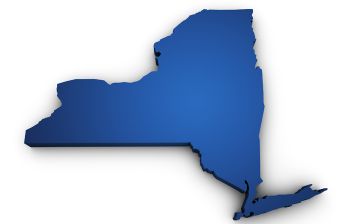 The exodus of a few large banks from upstate New York * during the past few years has created opportunity for vast market penetration for the smaller market players in Rochester, Buffalo, and Syracuse. But whether banks such as Bank of America Corp. and JPMorgan Chase & Co. will pull out further remains to be seen.

The largest branch deal in the region in recent years involved First Niagara Financial Group Inc. buying 195 branches from HSBC USA Inc. in 2012. First Niagara subsequently sold some of those branches to local community banks. Bank of America has also been actively selling branches in the region. The company sold 20 upstate New York branches to Berkshire Hills Bancorp Inc. in January 2014 after selling six branches to Chemung Financial Corp. in 2013.

JPMorgan has yet to make similar moves, but the company has had a "big shakeup" with its wealth management team in the region, Robert Bolton, principal at Rochester, N.Y.-based Iron Bay Capital, told SNL.

"They appear to be quietly pulling out of the area," Bolton said.

Bolton said big banks are yield-chasers—just like any investor—and have decided that the capital they would have to deploy in those markets to attain growth would not meet return expectations.

"If they feel that they're not going to attain that [yield], they're going to go looking elsewhere for it," he said. Many of the bigger banks operate in markets with more appealing demographics and growing populations and believe they can better deploy their growth capital elsewhere.

"You have 70 million baby boomers, but unfortunately they're not moving to Rochester, Syracuse, or Buffalo," he said. Those three markets are holding their populations but are not growing, Bolton said. 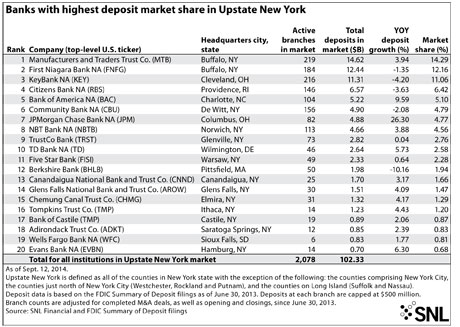 HSBC may have concluded to some degree that it wants to reduce its footprint in the U.S. as a whole, while Bank of America seems to be concentrating on markets with higher population density and growth potential than what can be found in upstate New York, Michael Jamesson, head of Jamesson Associates, a consulting firm in Scottsville, N.Y., told SNL.

Jamesson said BofA will likely stay in the metropolitan markets but continue to vacate the more rural locations in the region. At the same time, Basel III capital requirements will continue to put pressure on big banks and force them to take a closer look at their operations.

Those banks will have to consider capital requirements and compare them with growth opportunities when deciding whether further branch paring in the region is needed. "I think that's going to be ongoing with any of the larger institutions that are going to have to pay much more attention to capital," Jamesson said.

In terms of the economies of those New York cities, Bolton said that what did not go up during the early 2000s also did not come crashing down during the financial crisis.

"Things here have held, and a lot of that is household leverage," Bolton said. And in large part, that is due to the fact that people in those markets tend to live within their means. "They buy one house and they live in it," he said. "They have a car and they drive it for five years. They don't go out there and live the extended lifestyle."

Bolton said overall deposits in the region are likely to remain stable. And Jamesson said small-business lending, which may not be well-served due to the market upheaval, is one area where small banks might have opportunity for some growth.

Kingsley said Bank of America believes it can service some of those customers via the internet or electronically. So if consumers in those smaller markets need a national bank for their retail needs, the company would still be available—just not with brick-and-mortar buildings.

Kingsley said very small community banks do not often have the opportunity to have a dialogue with a bank like BofA about branch sales because the larger bank might not trust them with the conversion or to raise the capital to finance the transaction. 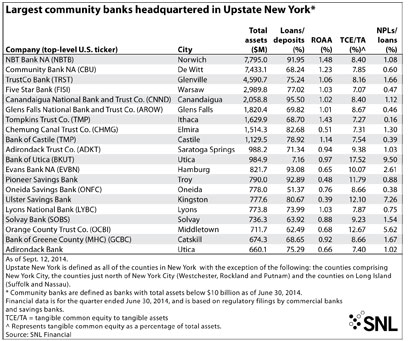 Jamesson said big banks are now looking more closely at the municipal business in upstate New York and the capital implications that come with it. "We've seen less aggressiveness on the part of the larger banks in that field," Jamesson said. The municipal business is low-risk and banks can make money, but large banks may not want to use up their balance sheets in that way, he said.

Jamesson pointed to Buffalo as an upstate New York market that seems to be going through a bit of a resurgence. He said there is construction activity ongoing, and the city seems to be taking better advantage of its waterfront area. "So I would not be surprised to see a bank or two say, 'Hey, I think there's some business there,'" he said. The city also sits on the Canadian border, so there are trading opportunities through NAFTA that are still present, he said.

M&A wave in the wind?

So with that backdrop, could upstate New York be ripe for further whole bank consolidation?

Jamesson said most of the remaining smaller community banks are either rural or small-town in nature, so it will come down to whether regional banks want to fill in their footprints in a way that those markets make sense for them.

Also, pricing will be a factor. If M&A prices in general can get above 1.5x book value, activity could increase, James said. Bolton said consolidation will continue in those markets due primarily to the cost of doing business.

"The robust legislation that has rolled out since 2008 is having an impact on a lot of these smaller players," he said. Many community banks today are looking for the right partner even though those deals may happen further down the road.

Bolton said one of the biggest drivers of that need to consolidate is the efficiency metrics that come along with it. "I believe that consolidation is going to continue in the Northeast.”

* Editor’s Note: Upstate New York accounts for the bulk of the state’s land geography. “Downstate” consists of New York City’s five boroughs; the northern and eastern New York suburbs; and nearby areas. The two areas are so different that historically there were movements to spin off the city as a “51st state.” Years ago, when branching laws were liberalized, some larger banks of the day tried to make inroads upstate and retrenched when they had middling success. Much has happened since then.