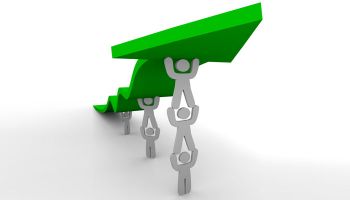 A few years back, it was not unusual for the strong performance of a few very large banks to move the industry’s needle, belying lackluster earnings, or even losses, by the majority of the industry, community-based banks. But 2014’s third quarter came in with community banks as a group posting slightly better earnings improvement year over year than the industry as a whole.

On Tuesday, Nov. 25, FDIC issued its Quarterly Banking Profile. Nearly two out of three community banks reported higher earnings for the third quarter 2014 over 2013, and only 6.6% were unprofitable for the quarter.

Loans to small businesses grew by 0.9% in the quarter, over the second quarter, among community banks, outdoing the industry, which saw 0.3% growth. Growth rates were higher year over year—3.6% for community banks, 2% for all banks.

FDIC Chairman Martin Gruenberg noted that third quarter income growth for all banks was founded on revenue growth, as opposed to lowering of loan-loss provisions.

“This can be a more sustainable foundation for continued earnings growth going forward,” said Gruenberg.