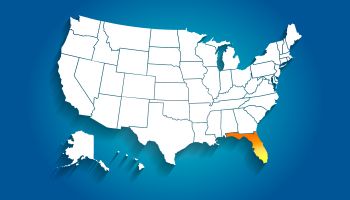 Loan growth for community banks was hard to come by, across most regions of the U.S. during the first quarter of 2015. While banks in the Southeast were among those hard-pressed to find growth, lenders in Florida could see a boost in coming quarters.

Median first-quarter loan growth among commercial banks with less than $10 billion in assets, when compared with the previous quarter, came in at just 0.37%, an SNL analysis of regulatory filings found. Compared with a year earlier, median growth was up 6.82%.

When compared with the linked quarter, the West showed the best growth, coming in at 1.74%, according to the SNL analysis. The mid-Atlantic region fared second-best with 1.25% growth, while the Midwest produced the weakest result with a loss of 0.36%.

Tim Scholten, president of Columbus, Ohio-based consulting firm Visible Progress, told SNL loan growth has been up overall but somewhat spotty regionally. Mortgage activity was raised due to low interest rates, and it showed up in a big way in banks' fee income categories.

"It's nice to see people are buying, and there was yet another round of refinancing for those that missed the last round due to lower values or tarnished credit over the past couple of years," Scholten said. The strength in the market has helped many consumers get another shot at lower rates, he said.

Median year-over-year growth was notable in some regions, but still hovered mostly in the mid-single digits. The West region produced the strongest median expansion, at 10.44%, while the Southeast pulled up the rear with median loan growth of just 5.24%, SNL found.

One of those Western banks, Olympia, Wash.-based Heritage Financial Corp., experienced non-covered loan growth of 2.2% during the first quarter.

President and CEO Brian Vance, speaking during a conference call to discuss first-quarter results, said the bank is optimistic that non-covered loan growth for 2015 will be in the 6% to 8% range. Executives said competition for loans is stiff, but the bank will continue to focus on high-quality loan growth without taking undue interest rate risk.

Sunny spot in the Southeast

Rafferty Capital Markets analyst Satyam Arora told SNL that despite the Southeast's struggles, Florida could be a bright spot. The Sunshine State experienced 1.56% median loan growth from the fourth quarter of 2014 to the first quarter of this year and 9.27% median growth on a year-over-year basis.

More than 800 people are migrating into Florida each day with varied needs, but nearly all of them need housing. Residential construction loans increased 34.50% from the first quarter of 2014.

"There is construction coming up everywhere in Florida. Empty plots are hard to find," Arora said. The construction is primarily condos and business units in downtown districts.

Commercial real estate, too, remains encouraging. Most of the banks have witnessed growth in those areas and will continue to invest in further construction and development in the state, Arora said.

The Southwest, including Texas, experienced 8.75% year-over-year growth. Danny Payne, a banking industry consultant and a former Texas Department of Savings and Mortgage Lending commissioner, told SNL that lending among Southwestern banks is "steady as she goes" but that the landscape could be changing.

There could be some M&A around the region during the next several months, and Payne said he has also heard that a few bank and nonbank groups in the Southwest may start filing for new charters before the end of the year.

"Some may already have filed," said Payne.

"I expect to see minor manufacturing units being initiated in Florida," he said. "This shall remain a very small portion of total loan volume, but it would be exciting for smaller community banks."

Growth in commercial and industrial and small business lending is inevitable, Arora said. C&I loans grew 10.95% in Florida on a year-over-year basis, the SNL analysis found.

Scholten said that due to the strengthening of values, there was also more aggressive lending in the home equity line of credit area. Consumers appeared to be taking advantage of the rates to consolidate and/or update their homes. And C&I lending picked up steam. Those banks that were aggressive seemed to pick up more than their fair share of the business, he said. "It is nice to see businesses investing a bit more back into their businesses again," he said.

Auto lending also appeared to be pretty strong, Scholten said, but the market is mostly captive through dealer finance. Those companies involved in indirect lending saw solid growth in automotive.

And while interest rates appear to be edging up a bit and optimism seems fairly strong at the moment, the market is still fickle. "One piece of bad news can cause optimism to be short lived," Scholten said. "But we're hoping for a strengthening [in] 2015."