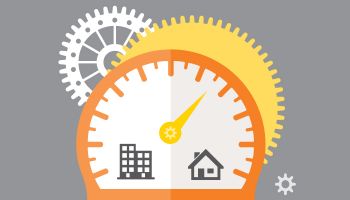 Reading Cooperative's loan portfolio is about 60% residential and 40% commercial. Its goal for an equal split will up returns and relationships.

Sometimes improving performance means changing your stripes. Over the last few years, Massachusetts’ Reading Cooperative Bank, nearly 129 years old, has been going through a transformation at both the staff and portfolio level, designed to squeeze greater profitability out of the mutual’s capital base.

When the bank began its business shift, the loan portfolio was running at 70% residential and 30% commercial, according to Julieann Thurlow, president and CEO of the $486.3 million-assets bank. Right now, the split is closer to 60% residential and 40% commercial, with the goal being to reach an equal split in the near future. Commercial includes C&I, CRE, and construction lending.

The transformation has been going on at two levels. First was a staff reorganization that occurred two-and-one-half years ago. A key element of this was a bolstered credit function, both in terms of its analytical capabilities overall and its commercial lending element. The bank rebuilt its commercial lending team from top to bottom, according to Thurlow. She adds that management worked to establish a clear credit culture, as well, including a formalized risk-rating process and more monitoring.

The bank’s intent was to support the renewed focus on business lending to increase returns.

Commercial loans are less of a commodity than mortgages, says Farone, and they come with a broader array of cross-selling and fee-generating opportunities. By contrast, he says, mortgages grow cheaper and cheaper to the consumer and increasingly represent a single-product sale, not a relationship.

A greater emphasis has been put on sales, too. “Community banks do a poor job of calling on customers and asking for their business,” says Thurlow. Being known in their market is not enough, because other providers that pursue the business aggressively fill the vacuum.

Having built a structure and a system to support the shift to higher-earning credits, the second part of the bank’s revamp was making major shifts in the loan portfolio. Earlier this year, the bank sold off a $10.5 million block of 30-year fixed-rate mortgages—substantially all of that type of loan. It produced a one-time gain on the sale and an improved return when the proceeds of the sale were redeployed into commercial loans.

More recently, management has been looking into the sale of a block of 15-year fixed-rate loans to free up additional capital to move into business lending.

Thurlow notes that the bank has enjoyed low-cost core deposits for many years. “It’s because we’re so close to the community,” says Thurlow. “Once deposit customers come to Reading Cooperative, they tend not to leave.”

The bank’s transformation continues to be a work in progress. Farone, whose company has assisted the bank through the post-crisis period and the transition, acknowledges that commercial lending poses a higher credit risk than mortgages.