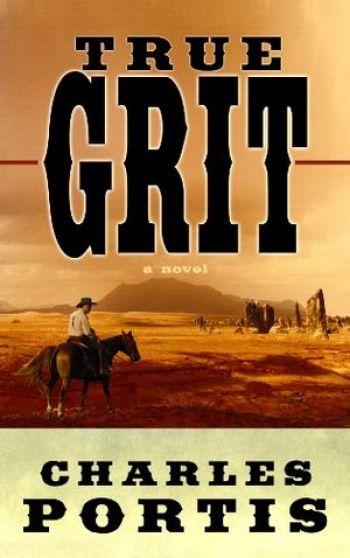 True Grit, by Charles Portis, is the first book in a series about books with a banker involved that we’ll tell you about in this column.

A few years ago, having enjoyed the remake of “True Grit”—both it and the original among my favorite movies—I finally read the book, by Charles Portis. By the end, I had discovered the banking surprise buried in it.

There’s a handful of bankers with whom, over 36 years, I have swapped books or stories about books or recommendations about books. This began with one of my first interviews, when a senior official of Irving Trust recommended I read Sidney Rutberg’s Ten Cents On The Dollar: Or The Bankruptcy Game, to learn about the way business bankruptcy really works.

Back to my story. Shortly after finishing True Grit I spotted Albert “Kell” Kelly, chairman of Oklahoma’s SpiritBank at a conference. Kelly has been one of my “book bankers,” and as much of True Grit takes place in what was then the Indian Nation, but later Oklahoma, I began to tell him.

Now, Kell knows just about everything about Oklahoma, and his family’s roots go back to the very days that Charles Portis wrote about. Kell already knew the story and the banking angle inside it, and insisted on sending me a copy of a book of mostly true stories about that period, called Oklahombres, Particularly the Wilder Ones. It’s the story of Marshall E.D. Nix and his role taming the Oklahoma Territory. That’s another tale for another time.

But back to True Grit and the banking connection. The outline of the story is a simple one, and it is told by “Mattie Ross,” opening this way:

“People do not give it credence that a fourteen-year-old girl could leave home and go off in the wintertime to avenge her father’s blood but it did not seem so strange then, although I will say it did not happen every day. I was just fourteen years of age when a coward going by the name of Tom Chaney shot my father down in Fort Smith, Ark., and robbed him of his life and his horse and $150 in cash money plus two California gold pieces that he carried in his trouser band.”

As the 1968 novel recounts, Mattie is no ordinary girl. She keeps the books and runs the business side for her family farm and manages much else besides, including revenge. Before the real adventure starts, she witnesses a multiple hanging, outsmarts an experienced horse trader by miles, and engages a U.S. marshal, the whiskey-soaked Reuben “Rooster” Cogburn to pursue her father’s killer—with her in tow.

Before the story is done, she more than proves that she is the one with true grit.

And she also reveals at the end of the novel that she grew up to be a banker.

She is a spinster business woman by the story’s conclusion and comments on how her townsfolk thought her “a cranky old maid” for finding the now-dead Cogburn and having his body buried in her family plot.

“People love to talk. They love to slander you if you have any substance. They say I love nothing but money and the Presbyterian Church and that is why I never married. It is true that I love my church and my bank. What is wrong with that? I will tell you a secret. Those same people talk mighty nice when they come in to get a crop loan or beg a mortgage extension!

“… I care nothing for what they say. I would marry an ugly baboon if I wanted to and make him cashier.”

Next in this series: The newspaper man and the bank chairman

More in this category: « When microseconds matter on “Wall Street”… The newspaper man and the fair-minded bank chairman »
back to top