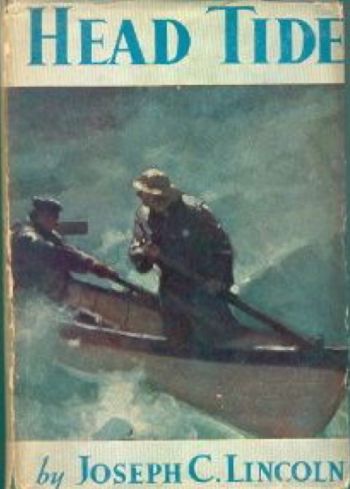 Head Tide, by Joseph Lincoln, is the second book in a series about books with a banker involved that we’ll tell you about in this column.

This series looks at bankers in fiction, the good, the bad, and the ugly, you might say.

New man in town draws line in the sand

Clearly, Mattie Ross, the heroine of True Grit discussed in Part 1 of this series, “True Grit’s banking surprise and other fictional financiers,” remained a tough cookie for life, and did seem to like her bit of power. But in another old book called Head Tide, I “met” a bank chairman who knew how to restrain the power that he could wield as a prominent local lender.

Head Tide, written in 1932 by Joseph Lincoln, takes place in a fictionalized version of the Cape Cod, Mass., area where the prolific Lincoln set many of his stories. Young Franklin Cobb, from out of town, inherits the Wellmouth Eagle.  It is a paper of little consequence, more or less controlled by Wellmouth’s movers and shakers, especially Captain Gideon Bates, the “emperor” of Wellmouth.

With the help of other characters, Cobb learns to be a country newspaperman, and manages to make something of the little paper. His first editorial includes this announcement:

“The Wellmouth Eagle, under its new ownership, has no axes to grind, no hobbies to ride, and no pet policies to exploit. It means to be a paper which every subscriber may read with confidence in its truth telling and find interesting, up to date, and informative. Its new owner and its new editor intend especially to make it a newspaper, not for any one section of our community, but for all sections alike—a fair field and no favor. It asks your cooperation in this attempt.”

Cobb has his challenges, stumbles, and even some romance.

And in the end, his paper helps put over a political coup in the Wellmouth area.

Problem is, it just so happens that the losing side is headed by Captain Gideon Bates. Early on Bates, who had controlled the paper under Cobb’s uncle, tried to buy it from Cobb.

“The impudent young squirt” foxed him and decided to run it instead.

When you beat your lender in politics

What I haven’t mentioned yet is that Bates just happens to be the president of the local bank, Wellmouth National and Savings.

Oh, and along the way, the Eagle borrowed from the bank.

The victorious Cobb receives a personal visit from the defeated Bates after the elections. The captain is gracious in defeat and admits his admiration for the young editor. They talk of many things, but finally Cobb can’t restrain himself any longer.

Cobb: “But, Captain Bates, there is one thing you haven’t mentioned at all. I thought when you came in here you had come to tell me that that note of mine your bank holds must be paid. Why you haven’t called for payment before this I don’t see. You were very kind when you let me have that money without security and, whatever you say, you must feel that I have treated you perfectly rotten in this election business.”

Bates: “Here, here! What’s all this? I haven’t said anything about any note, have I?”

Bates: “When that money was lent you it was understood that, as long as you paid your interest, the note would stand as it was?”

Bates: “Be still! Pay that money when you are able to pay it. That was the bargain between us and I’ll see that the bank’s end of it is lived up to.”

Cobb: “But—but Captain Bates, I— I— Why, you make me ashamed of myself. I didn’t expect—I—I can’t thank—”

Bates: “Didn’t ask you for thanks, as I know of. For God’s sake … what sort of a skunk do you think I am? I don’t mix my banking with my politics. Gave you my word, didn’t I?”

This is a reminder of a time when a handshake and a banker’s word meant more than a stack of compliance forms. Though the paperwork continues to grow, I believe that many community bankers still strive for the same thing today.

Next in this series: The troubled banker who did the right thing

More in this category: « True Grit’s banking surprise, and other fictional financiers Troubled banker who did the right thing »
back to top