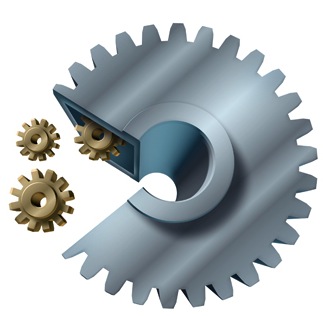 Banks are now willing to have strategic conversations and consider M&A in the South.

The South is home to the three of the four largest deals announced in 2013. Advisers see more transactions coming, as banks look to partner with other institutions to withstand heightened regulatory costs and plow through the challenging revenue environment.

Randy Dennis, president, DD&F Consulting Group, said there is no question that much activity and many discussions are happening right now.

"I would say that people started changing their minds about what they wanted to do back in November and December, because packages from the investment bankers started hitting the streets in February and March," Dennis told SNL. "There are a lot of folks that are considering. I don't know that the price points have been met yet. There is certainly a convergence of interest here. I think you're going to see more and more of that occur." 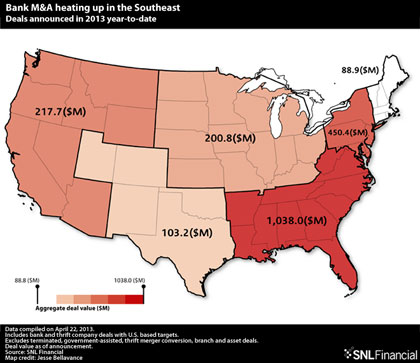 Jack Greeley, a banking lawyer at Smith Mackinnon in Orlando, Fla., said there has been a shift on the buy side and the sell side in the last six months. While some bankers still don't feel compelled to sell at current valuations, he said others are dealing with director fatigue and facing shareholder requests to create a liquidity event. He said many banks also recognize the need to spread heightened regulatory costs over a larger base.

Greeley described the mindset and inclination this way: "I can't get that larger base necessarily today very easily because of soft quality loan demand, so I'm thinking maybe I need to explore that merger or non-premium deal to get a larger base or maybe I just start retaining someone to solicit indications of interest to see what my value might be."

Like the rest of the country, banks in the South have struggled to report loan growth. SNL data show that the 93 publicly traded banks in the South with less than $5 billion in assets that have reported first-quarter results, as of April 28, experienced a 0.07% decline in their gross loan portfolios in the period. The same banks reported median margin compression of nine basis points from the linked quarter and eight basis points from a year earlier.

Those revenue pressures have some institutions thinking harder about remaining independent, advisers say. They also note that the strong market reaction to deals, including SCBT Financial Corp.'s pending purchase of First Financial Holdings Inc., has encouraged other banks to pursue transactions. The SCBT/First Financial deal is the second-largest transaction announced this year, with a deal value of $298.6 million, trailing only United Bankshares Inc.'s planned $494.7 million purchase of Virginia Commerce Bancorp Inc. The market embraced the SCBT/First Financial combination and has pushed up shares of the buyers by more than 10% since the deal's announcement.

Mark Lee, president and portfolio manager at Forest Hill Capital LLC, told SNL in late February that the SCBT Financial/First Financial deal was "perfect" for both sides and said that type of transaction is being discussed more regularly among bankers. Lee, whose firm owns shares in SCBT Financial and First Financial, believes more of those deals will begin to occur in cases where the seller considers raising capital against the prospect of partnering with a larger institution and determines the latter will provide their shareholders future success.

Fear of dilution appears to leading to more M&A conversations these days. FIG Partners Principal Matthew Veneri said there is definitely more chatter in the marketplace and that is leading to deeper M&A conversations than were had six months ago because banks are recognizing they need capital to grow, and raising capital will come with considerable dilution. Many smaller banks might believe that current takeout valuations are too low and they can eventually sell for close to 2.0x tangible book value, but they need to raise capital in the near term to remain independent.

Veneri said a small bank might have to take 40% or even 50% dilution when raising capital, and they would not recoup that dilution even if selling for 2.0x tangible book down the road.

What CEOs are saying on earnings calls

A few bankers on first-quarter earnings calls said they had seen a greater willingness among sellers to pursue a transaction. Cullen/Frost Bankers Inc. Chairman, President and CEO Richard Evans Jr. said April 24 that in the last 90 days, smaller banks in Texas have changed their attitude toward selling.

"You're seeing more mergers of a small bank with another smaller bank, and I assume that that is a movement to try to deal with the added expense of all of the over-regulation that's been put onto the banking system," Evans said on his company's first-quarter earnings call. "Prices have come up a little bit in regard to the very bottom, but there may be the beginning of a trend of smaller [banks] getting together to try to fight this cost issue that they're faced with." 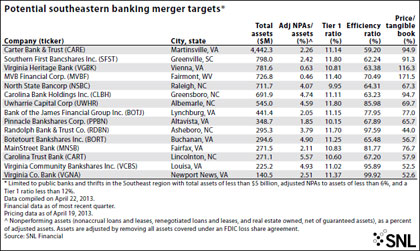 Pinnacle Financial Partners Inc. President and CEO M. Terry Turner said on his company's first-quarter earnings call that the market could be reaching an inflection point where the pricing on deals has an opportunity to bridge the gap between the bid and ask.

DD&F's Dennis said some sellers are now starting to recognize the earnings pressures they face.

"Their portfolio is paying off and there's no new loans walking through the door and they're sitting there, saying 'I know I'm making decent money now but next year I won't. If this portfolio continues to pay off and loans continue to not come in, it's going to be a mess and I better get out while the getting is good'," Dennis said.

Still, the pickup in conversations has not manifested into heightened deal activity in the South this year, at least yet.

SNL data show that 18 deals--for a total deal value of $968.4 million--have been announced in the South this year This compared to 20 deals totaling $1.23 billion through the first four months of 2012.

Even if sellers are more willing to consider a transaction, there remains some hesitation among buyers. Greeley said buyers, particularly publicly traded banks that are considering acquisitions, are very sensitive to the amount of tangible book value dilution that will result from a deal. He said sellers are beginning to understand just how important this is to buyers.

"They don't necessarily accept it, but they understand the parameters that the buyers are going through in the public markets, and the not very large margin of error that these buyers are dealing with," Greeley said.

Regulation is also holding up transactions, Greeley said. When pursuing a transaction, regulators want to ensure that the pro forma institution will be a CAMEL 2-rated bank and that appropriate risk management and corporate governance practices are being maintained. The larger the transaction, the more important that those provisions are met, he said.

"There's a perception on the buy side that every deal uses some regulatory powder. Knowing that I don't have unlimited powder, so to speak, I'm going to be disciplined on how I go about using it," Greeley said.

Dennis also noted that buyers are proceeding with caution through the due diligence process. He expects that more deals will be struck, but will ultimately fall apart before parties reach a definitive agreement because buyers are taking a harder look at targets' loan portfolios.

"I think you're going to see more deals that are announced and then fall apart before the definitive agreements because due diligence isn't favorable," Dennis said.

The hurdles to getting a deal done, which have been in place for some time, seem to have kept deal activity from erupting in the South. But, a shift does seem to be occurring on at least the sell side, leaving some hope for those waiting for a return of healthy bank M&A activity in the South.

Andy Pierce contributed to this article.