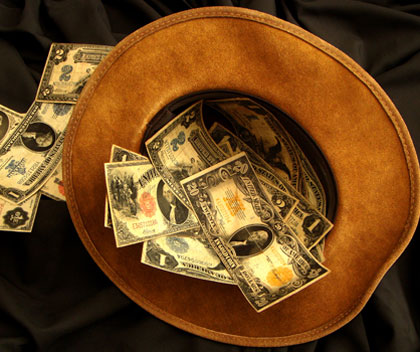 For some banks in Texas, shifting demographic and income trends are swelling the population in their local markets amid the state's robust recovery.

The state has managed to cruise through the economic slowdown of recent years, generally posting some of the best growth and lowest unemployment numbers in the country. It benefited from a relatively tame housing market as property bubbles inflated in other markets and was boosted by relative strength in a number of industries, including a growing natural gas sector.

That economic strength has continued through today. The Federal Reserve Bank of Dallas reports that the state's job growth was 1.5 percentage points higher than in the rest of the U.S. during 2012. A survey of the state's manufacturing activity in March, for example, showed faster growth more broadly, as a number of key indexes rose--including a general business activity index, which reached its highest point in a year.

The bank expects that this outperformance will continue in 2013, though at a somewhat more moderate pace. In an article outlining the state's economic prospects for the year, senior economic policy adviser Keith Phillips wrote that "Texas is likely to see faster economic growth than most U.S. states." Phillips predicted that the state will see overall job growth of between 2% and 3% for the year. 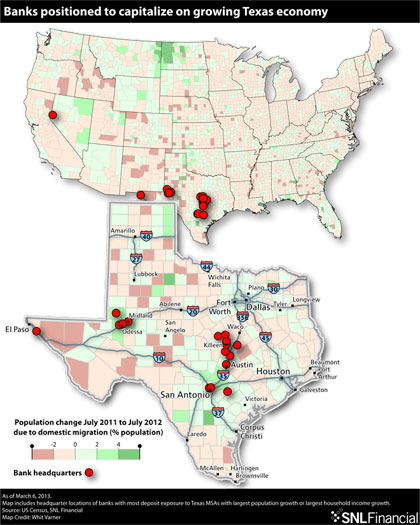 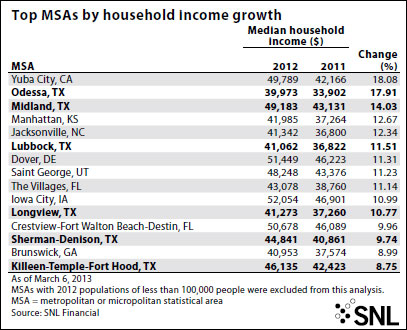 Perhaps not surprisingly, given this relative economic strength, SNL data shows that the state is home to six of the top 15 metropolitan statistical areas by household income growth. Of the top six MSAs by percentage change in income growth, three were in the state.

Odessa recorded the second-highest household income growth in the country, rising 17.91%, and Midland was the third-highest, at 14.03%. Lubbock saw household income rise 11.51% year over year.

Florida was the only other state that was home to more than one of the fastest-growing MSAs by household income growth.

The state also boasts some of the areas with the most favorable demographic trends, including four of the top 15 MSAs by population growth. Austin-Round Rock-San Marcos, Killeen-Temple-Fort Hood, and San Antonio-New Braunfels all saw their populations rise by more than 2% during 2012. The population of El Paso grew 1.98% during the year. In this area, again, only one other state--South Carolina--had more than one MSA among the top 15. 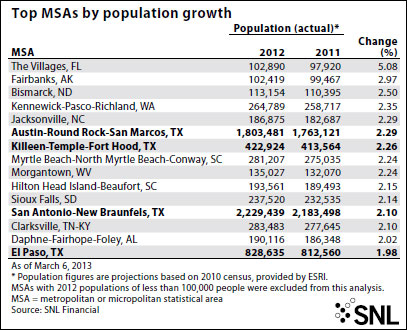 Many of the banks in these MSAs saw deposit and loan growth during these periods. 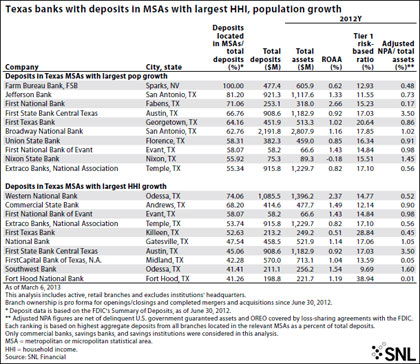