Today’s challenging environment confronts bankers with generally slow growth with historically low interest rates along all points of the yield curve. This, coupled with ongoing uncertainties for consumers and businesses, has bankers very concerned with earnings performance and sufficiency of capital going forward.
By Keri Crooks, Darling Consulting Group
As a result, this “perfect storm” can tempt bankers to take on additional interest rate risk in order to enhance current earnings, that is, funding long assets with short liabilities. Sometimes this is done within acceptable levels. But sometimes bankers attempt to stretch things too far. That has regulators very concerned and focused on rising rate risk.

That said, the Interagency Advisory on Interest Rate Risk Management and the follow-up Frequently Asked Questions has reminded bankers that stress testing for both scenario and sensitivity analysis is an integral (read “required”!) component of IRR management. I’m going to take you through the heavy lifting, and point you in the right direction to stay ahead of regulatory expectations—and of two worrisome scenarios that may already be developing in your bank.
Sensitivity versus scenario
To be clear, both types of analysis focus on the potential change in a bank’s earnings stream associated with changes in interest rates.

The difference is that:

• Scenario analysis typically examines the impact of outside events on the bank’s IRR profile.

Let’s look more closely at these two means of testing the bank’s portfolio.
Putting common sense into sensitivity analysis
Sensitivity of a bank’s earnings to changes in interest rates is not only driven by the structure of its balance sheet and movement in interest rates, but also by the underlying model assumptions.

Many assumptions must be made in structuring IRR models. But few have as significant an impact--and currently have such potential for risk in the next rising rate cycle--as depositor behavior.

The industry has experienced a large inflow of deposit balances over the last five years. Depositors have sought out safety and insurance, and have also found very few attractive alternatives for putting their money to work.

The table below outlines, at a high level, this trend for banks under $10 billion in assets and displays deposit changes as a percentage of assets from December 2006 to June 2011:

Now, on top of these trends, consider this as well, gleaned from conversations with community bankers. Deposit growth still continues, occurring even at today’s very low deposit rates. (Note: Cost of funds is quickly approaching zero in some regions.)

This suggests that as interest rates rise, banks will likely experience an outflow of “parked” deposit balances and/or a shift in their funding mix, reverting back to time deposits at higher costs.

Why all this focus on rising rates when the Federal Open Market Committee has announced its intention to work for low rates through mid/late 2014?

While rising interest rates may seem like a distant scenario, bankers need to be conscious of the impact that parked money leaving their balance sheet or that depositors requiring to be paid more than assumed will have on their projected earnings under rising-rate scenarios.

Analyze your funding mix and rates paid on local deposits back in 2006/2007 and examine how a migration back to this mix would impact your net interest income position under rising-rate scenarios. The outcome of this analysis may change your strategic priorities, as it did for the bank depicted below.

Below is an example of a recent stress test whereby a percentage of non-maturity deposits were assumed to migrate into higher cost CDs when rates rise. The graph on the right shows a much different picture and potentially painful rising rate scenario. 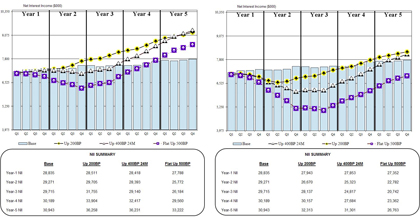 For a larger version of this chart, click here for a PDF.
Among the steps this bank took as a result included:

Additionally, give some thought to the average life of deposits or decay rate assumptions in your Economic Value of Equity analysis. Absent a core deposit study or internally-developed data sets unique to your institution, banks should consider periodically stress testing these inputs within the EVE model as well. Recent exam feedback is indicating that industry estimates for non-maturity deposit decay are just a starting point.
Developing scenario analysis with significance
While sensitivity stress testing looks at the key variables and assumptions used in models, scenario stress testing should be based on possible events or future outcomes.

That said, when interest rates do begin to rise, it is possible for the increase to be more than the standard 200 basis point range that has been historically looked at by banks (for a variety of reasons).

Note: It would take an upward move of only 500 basis points in short-term rates by Federal Open Market Committee to get us back to where we started with the Fed funds rate at 5.25%!

History may not precisely replicate itself the next time around, but this flattening trend has reared its ugly head time and time again and serves as a reasonable scenario for examining potential rising rate risk. These types of scenarios should be part of a bank’s quarterly IRR analysis in today’s low rate environment and the Advisory on IRR makes it clear that banks should regularly assess IRR exposures beyond 200bp and should include changes in the shape of the yield curve.
Reconceiving what a “stress” test tests
Given that all arrows are pointing towards a low-rate environment into 2014 (vs. rising rates), it is critical to think outside of the box and develop stress scenarios that are relevant to today’s challenging environment, not just the traditional stress concepts.

The banking industry is faced with slow loan growth, ongoing loan pricing/modification pressures, limited funding cost reductions and declining risk/return dynamics in the investment arena. Net interest income levels under this type of scenario have only one direction that they can go.

The following are a couple of potential stress test scenarios to consider:
• The “Gear Shift” Scenario. Most NII models assume that changes in interest rates begin on day one of the simulation. How would your rising-rate exposure change if rates were held at today’s levels for the next two years and then trended higher?

You may think that there would be little change, but think again.

Most banks have sizeable volumes of investment cashflow coming off  their existing portfolios over the next 24 months. Those funds will need to be re-invested at today’s lower yields vs. a heightened rate environment. Some ALCO groups may even be considering adding duration/extension to the investment portfolio to get closer to covering the cost of their overhead.

Additionally, borrowers are not only looking for lower rates, but also longer-term fixed rate deals. Both of these wrinkles will continue to unfold the longer we trend sideways, and the potential for rising rate exposure in the future will increase.
• The Mega-Refi Scenario. Historically, low levels of interest rates have generated incentives for borrowers to refinance existing debt. The current picture may hide a big surprise.

Besides the usual interest-rate impact on refinancings, there’s a competitive dynamic overlaying it. The size of the pie does not appear to be getting any larger, but every bank is going after a bigger piece, which is placing further downward pressure on loan pricing in many regions and elevating option risk.

If rates remain at current levels or decline further, there is the potential for added prepayment and/or refinancing activity above and beyond what is currently projected by prepayment models.

How will your earnings stream change should this stress scenario occur?

And to what extent has this prepayment activity already begun?
A final caution
The longer this low rate/slow growth environment continues, the greater the sense of necessity will build to stretch out on the risk spectrum for earnings. Examining a variety of potential stress scenarios and having a robust IRR monitoring process will give you more flexibility to implement and support various strategies (or alter existing strategies).

Keep in mind that there is no one-size-fits-all approach and ultimately your risk management process should match the risks being taken.
About the author
Keri Crooks, managing director, joined the Darling Consulting Group team in 2002. She presently consults directly with ALCO groups and boards of directors at banks in the area of asset liability management with the goal of enhancing high performing institutions. She takes a hands-on approach at developing strategies to best fit the risk profile for each bank's balance sheet, while also balancing trends and pressures alive in the current industry.
Additionally, Crooks remains actively involved in advancing Liquidity360°, DCG’s proprietary liquidity risk management software, and is a frequent author on balance sheet management topics.