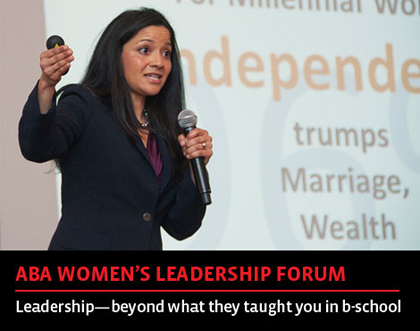 Having a “sponsor,” rather than a “mentor,” can add a 30% boost to your career trajectory, according to Selena Rezvani, author and co-president of Women’s Roadmap.

Rezvani, author of The Next Generation of Women Leaders: What You Need to Lead But Won’t Learn in Business School and the new Pushback: How Smart Women Ask—And Stand Up—For What They Want, addressed an audience of 100+ women working for banks and related organizations (and one male banking reporter, father of two daughters). She drew on current research to paint a picture of women millennials with different ideas, and somewhat better options, than previous generations enjoyed.

Regarding the opening point, Rezvani said research by the Center for Work-Life Policy in 2010 indicated that 62% of Gen Y women don’t want to repeat the approach their mothers often took to corporate jobs. Those who grew up as daughters of women executives with hard-charging “extreme” careers see the costs as too great, said Rezvani, head of Women’s Roadmap.

At the same time that many make it clear to researchers that a life of 60+ hour weeks holds limited appeal, many indicate that their most important goal is independence. Citing the Levi Strauss Millennial Study, Rezvani said that “independence trumps marriage, wealth, and professional success.”

In keeping with that, Rezvani said research shows a heavy entrepreneurial bent for the millennial women. She said that the Gen Y Women’s Pulse Poll of 2007, sponsored by Lifetime Television, indicates a strong preference for being in one’s own business, as opposed to such other choices provided as CEO, celebrity, President of the U.S., or four-star general.

One factor that enables such thinking is the very heavy educational edge Gen Y women have been building. “They are the most educated cohort of all time,” said Rezvani, with 59% surveyed holding bachelor degrees, 60%  holding masters’ degrees, and 50.4% holding doctorates.
Helping the younger generation of women
Rezvani used her discussion of current research as a springboard for five points that she felt could help women bankers do more to help younger women bankers to advance. Indeed, some of the attendees said that they were just as likely to take the advice themselves.
1. Aim for 100% “ownership” of the banker’s career.
Too often, women in business expect that if they simply keep their head down, work really hard, and produce success for their employer, that they will gain success. “Good work doesn’t guarantee rewards,” said Rezvani, is a critical lesson to learn, or to pass on.

Rezvani said that a noted executive she interviewed, Vicki Ho, GE China’s COO, told her, “The company’s not there to make you successful--that’s your job.”

Self-promotion makes many people uncomfortable, but Rezvani said that a little bit of self-marketing goes a long way. Furthermore, she said, “if it’s true, then it’s not bragging.” Rezvani said that the person who brings in the successful sale for the company (or loan for the bank) ought to say so.

To those who feel their boss will recognize their record of performance, Rezvani warned, “Managers have short memories.”

Success doesn’t come out of a box, however, and  so women who want to advance should create a “personal board of directors,” according to Rezvani.  These are contacts, friends, mentors--anyone willing to help the person to learn or improve a skill that will lead to advancement.  Examples include technology prowess and writing ability.

Owning a career also means managing its advancement by volunteering when opportunity knocks. Rezvani said she learned herself that it’s critical to get over the barrier of fearing to raise one’s hand, to step forward.
2. Hone negotiating skills, and get over reticence.
Men are four times as likely to initiate negotiations than are women, according to research Rezvani cited. Paradoxically, “women tend to be better negotiators on others’ behalf,” she added. Sometimes the cause is that women can be more accepting, setting lower goals that they wish to achieve from a situation. Lack of confidence represents another factor.

Women also need to learn to interpret “no” more clearly. Sometimes “no” means just what was said. But sometimes the “no” really means, “not yet.”

Men tend to not take “no” as a final answer, said Rezvani. Women need to learn to do the same. Tenacity will come of it.
3. Change the relationship with risk.
“Risk” connotes danger on some level, to many, but it also means “opportunity.”  Rezvani believes our culture teaches boys to take risks, and coaches girls to avoid risks. She thinks women need to adopt a more “go for it” attitude.

Research for Hewlett Packard found that women won’t apply for a new job unless they have 100% of the competencies required. The same research found that men will apply with only 60% of the skills asked for.

In general, she said, women tend to run themselves down: “I’m not experienced enough” or “I’m not savvy enough.”

Rezvani said climbing the career ladder depends on being comfortable with taking risks before one feels ready. “Ask yourself, ‘What do I need to do to be comfortable enough to do this?’,” said Rezvani.

“You sometimes have to go for stretch opportunities,” Rezvani said.

There’s another side to this reticence, Rezvani revealed: Women tend to like guarantees. They want to know they will succeed, that things will work out.

This holds them back. “I say, if it won’t ruin you, then do it,” said the author, whose first book was an expansion of her master’s thesis. “Think like an entrepreneur.”

And remember, Rezvani added: “There’s no such thing as ‘perfect’ conditions.”
4. Leverage relationships.
Think of the people in one’s career, who have helped. Rezvani divides them into two groups: “mentors,” an oft-used term, and “sponsors.”

Some folks use these terms interchangeably, but there are important differences.

A mentor listens and gives advice. Their role may be somewhat passive, and action hinges on what the aspirant does with their advice.

A sponsor, on the other hand, is the kind of person who may put you on a diving platform and push you into the water if you don’t move yourself.

A sponsor, said Rezvani, “pounds the table for your advancement.” A sponsor will nominate their protégé for advantageous assignments or get them invited into key meetings.

Another aspect of relationships concerns networking. Rezvani said that research by McKinsey indicates that men tend to have broad but shallow networks. Women, by contrast, tend to have narrow but deep networks.

This led to some laughter, but Rezvani noted that when it comes to business, the broader the network, the wider the net.  This comes in handier for hearing about business leads, job opportunities, and such.

“It’s a numbers game,” said Rezvani.
5. Don’t opt out before opting in.
In an extension of that “guarantee” thinking, perhaps, women, facing a worklife-homelife balancing act more often than men, frequently attempt to solve it by aiming lower.  Rather than take a more challenging job, they will tend to take the less-challenging job that they believe they can handle, given other demands on their time.

“The answer to work-life balance is not taking a job that’s easier,” said Rezvani.

Rezvani believes women should take the more challenging job, and find ways to adapt it to their life needs.