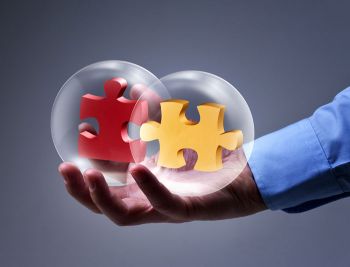 Bank merger making concentrates in a handful of big players.

With the stock market in general—and bank stocks in particular—continuing to perform well, M&A among financial institutions will likely continue its slow yet steady pace. Buyers are looking for opportunities to gain scale and market share, while would-be sellers have the same reasons to pursue deals that they did a year ago: regulatory costs; good (but not great) loan demand; and an outlook of lower profitability for the next 12-18 months. 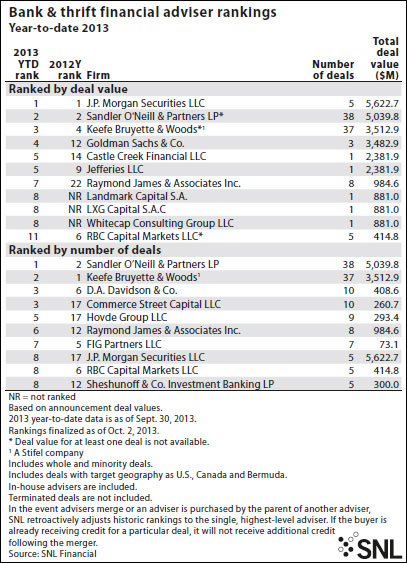 When banks and thrifts do reach agreements, it is often with the help of two firms in particular. Sandler O'Neill & Partners LP and Keefe Bruyette & Woods Inc. ranked atop SNL's bank and thrift M&A league table for financial advisers in terms of the total number of whole and minority deals in the first three quarters of the year. Sandler O'Neill topped the table with 38 deals, followed by Keefe Bruyette & Woods with 37.

D.A. Davidson & Co. and Commerce Street Capital LLC tied for third, both advising on 10 deals. A strong third quarter powered Sandler O'Neill to the top of the league table for the first three quarters after the firm trailed Keefe Bruyette & Woods at the year's midway point.

In many cases, sellers' price expectations have increased, yet those banks will often seriously consider deals with the right buyer that has publicly traded stock and dividends, Thomas Rudkin, a managing director of investment banking at Syndicated Capital, told SNL.

Rudkin said there are always a great number of "wait-and-see" bankers during active and even not so active markets.

Deals are always driven by value, but the quality and potential upside of the buyer's stock are key to getting deals done, too.

"If the buyer's ability to generate more earnings is significantly higher than what the selling bank is they are going to seriously consider it," Rudkin said.

The largest deal announced thus far in 2013 in terms of purchase price was Los Angeles-based PacWest Bancorp's pending acquisition of Los Angeles-based CapitalSource Inc. That deal was announced in July and is expected to close in the first quarter of 2014.

Rudkin said asset quality is still holding deals up to some degree because buyers often use it to knock prices down, typically turning the selling banks off. But the residential real estate market is showing signs of improvement, which will help both sides.

Asset quality will not be as much of an issue a year from now, Rudkin predicted. 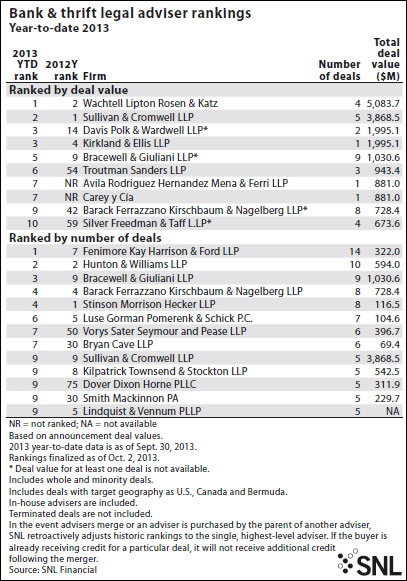 David Danielson, head of investment banking at Ambassador Financial Group Inc., told SNL that asset quality concerns for the most part have been cleared up, but issues such as capital, regulation, and rising interest rates have taken their place.

Danielson said buyer and seller expectations have converged because many smaller community banks that thought they would survive the economic crisis and come out on the other side with normalized earnings are looking at a different future.

"I don't think they feel as good as they thought they were going to feel," he said.

Tide rises, but no tsunami in sight

This year and 2012 saw an improvement in deal flow compared to 2010 and 2011, but deal volumes are still down on a historical basis, Danielson said. And he believes the sector will continue to see a steady low volume of mergers. Expectations are converging slightly, but there is a lot of wait-and-see going on in terms of capital and regulatory impact.

Also, the increase in interest rates during the second quarter contributed to the uncertainty, Danielson said. As those issues are worked through, there may be a "small bump" in M&A, but Danielson said the merger wave that many have predicted is unlikely to materialize anytime soon.

"What we had was a rising tide, but that tide has stayed pretty low," he said.

Still, Danielson expects more activity among the smaller community banks as efficiencies start to come into play when companies reach the $500 million asset size and larger.

Banks continue to make lower-yielding loans while growing their investment portfolios, so margins are heading down. In turn, they must find ways to be more efficient—and banks see M&A as one way to achieve that.

Rudkin said that while most of the country is seeing a fairly normal number of transactions and "decent" pricing, the volume and seriousness of conversations taking place in the Southeast has increased.

He said those talks will lead to deals, demonstrating that states like Georgia, Florida, and the Carolinas are on the rebound.

"Those states are going to continue to grow," he said. "Everything is coming back slowly, and it's going to take some time." 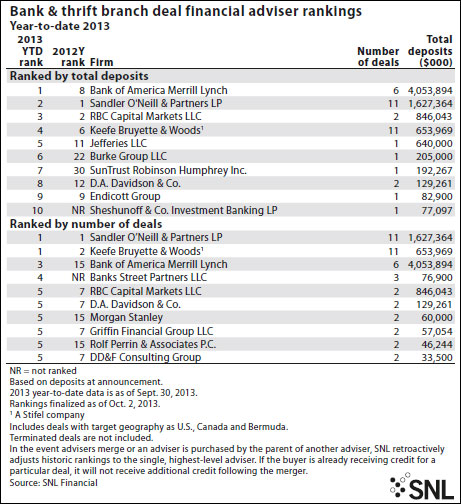 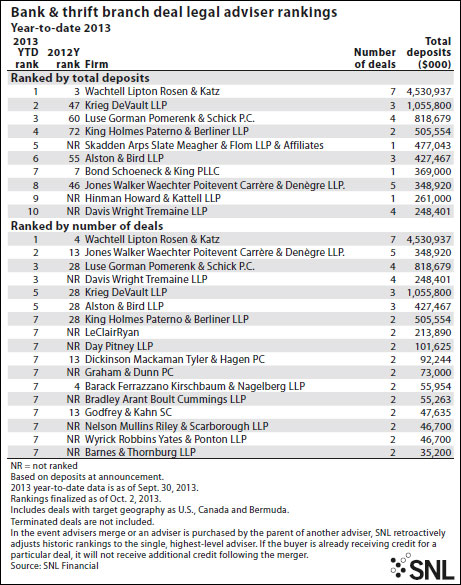