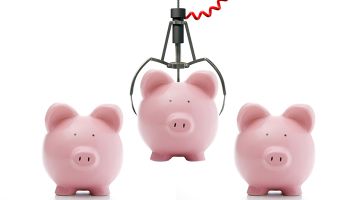 In an effort to offset sluggish revenue trends amid a slow-growth environment, KeyCorp in mid-2012 launched a companywide efficiency initiative aimed at carving out costs and boosting the bank's bottom line.

At the heart of the effort: branch consolidation.

Key for Key, and others

Between June 2012 and the end of 2013, the Cleveland-based company consolidated 81 branch locations, or approximately 8% of its franchise. Over the past 18 months, Key implemented annualized cost savings of $241 million.

"Efficiency and positive operating leverage are becoming part of the fabric of Key," Beth Mooney, chairman, president and CEO told analysts this month after posting fourth-quarter 2013 net income attributable to common shareholders of $224 million, or 25 cents per share. That was up from $197 million, or 21 cents per share, a year earlier. 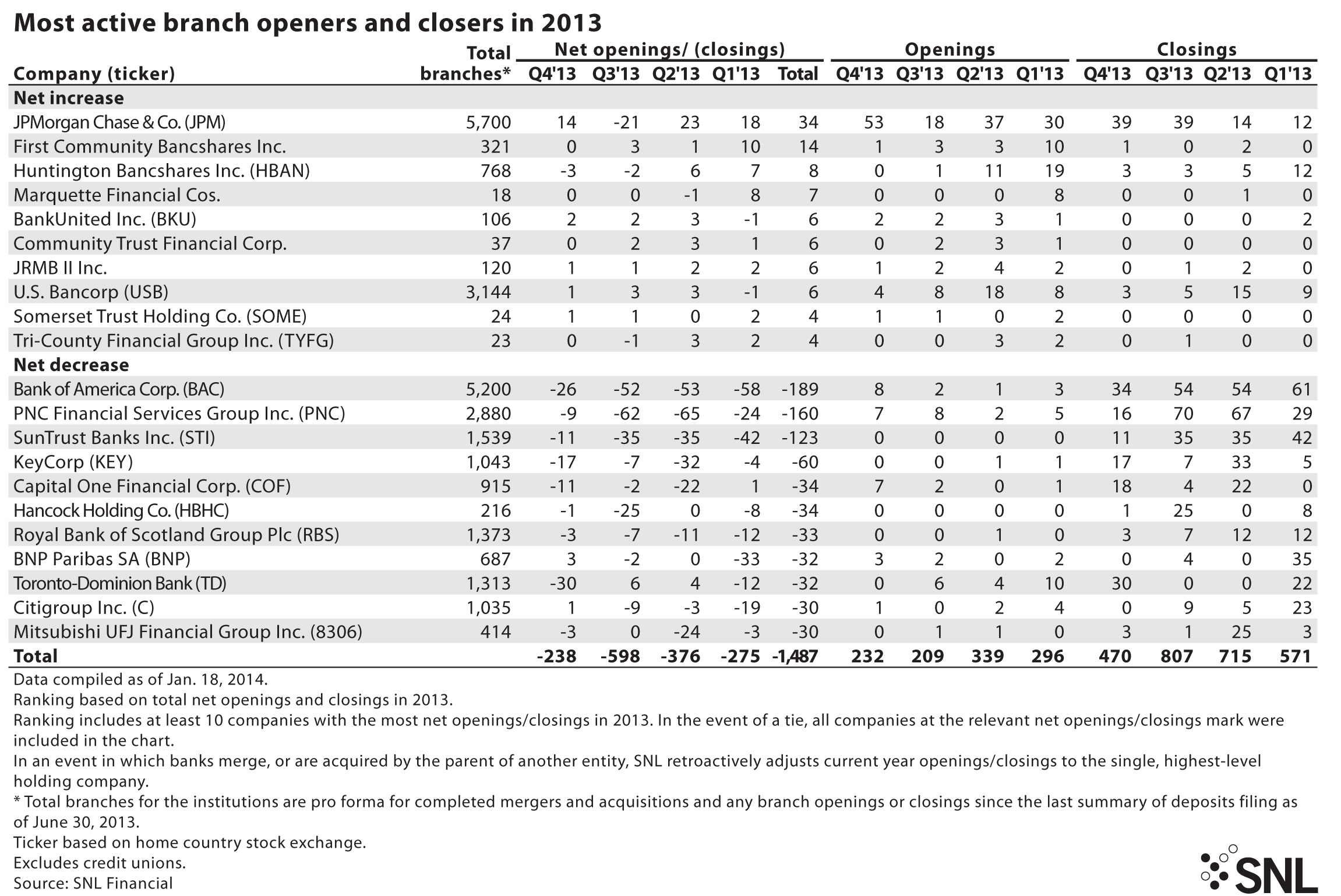 Bank of America Corp., PNC Financial Services Group Inc., and SunTrust Banks Inc. closed even more branches than Key during 2013. Capital One Financial Corp., Hancock Holding Co., and Citigroup Inc. were among others actively trimming branch counts, as lenders of all sizes grapple with weak revenue growth and heavy compliance costs that are motivating them to reduce the fixed expenses tied to large branch networks.

Many companies, in addition to shuttering or selling off branches, are working to downsize their branches or are at least considering the possibility.

Webster Financial Corp. is closing branches and downsizing others. Some branches that average 3,000 square feet in size are undergoing redesigns that will cut space in half, the company has said. 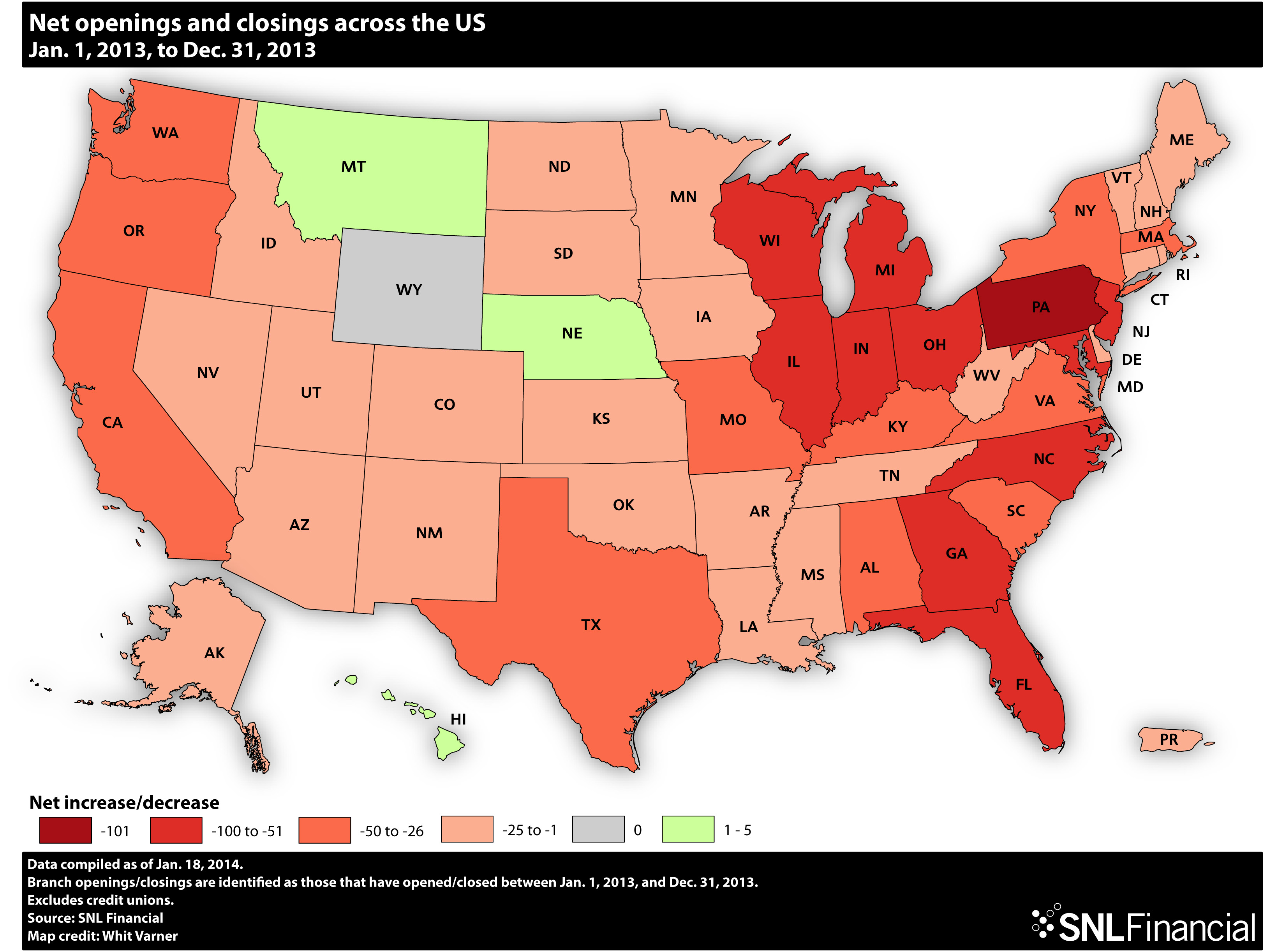 Of course, branches are not being eliminated altogether. Many customers still view them as the public face of banks, and as such, well-placed branches provide an important marketing function in high-traffic neighborhoods.

But banks are getting increasingly choosy about where they have branches. 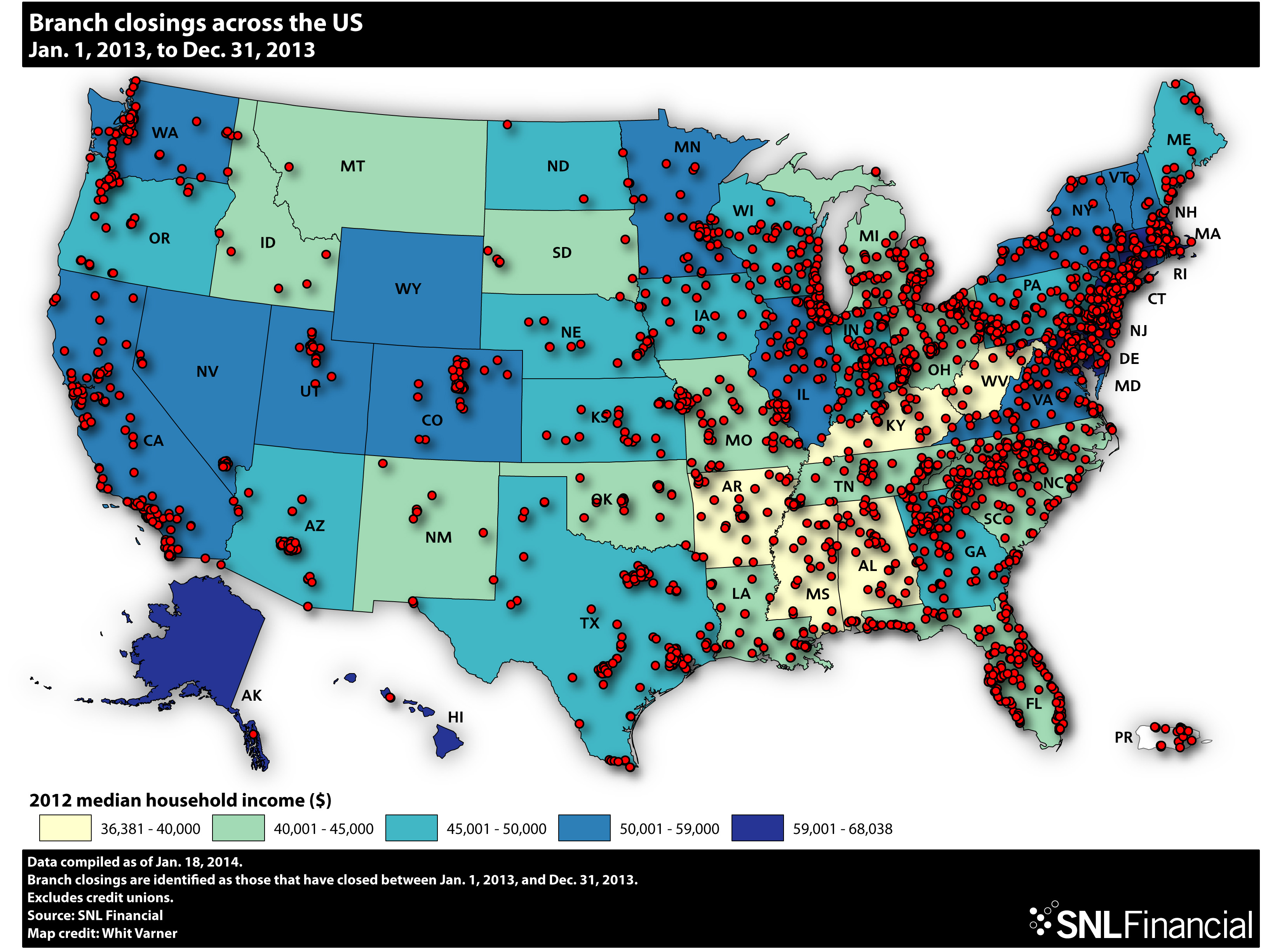 Even expansionists throttling back

Even some companies that have been expanding their branch networks are beginning to reconsider. Case in point: JPMorgan Chase & Co.

The company led all others in 2013 by growing its branch count by 34. But the New York-based banking giant's CFO, Marianne Lake, said this month during a call with analysts that JPMorgan had "completed building out our key expansion markets, including California and Florida," and "we feel good about our footprint at or around" its current level. She added that the "focus from here is on optimization, including branch size and usage, and leveraging digital capabilities."

That latter piece is key, as increasingly more bank customers are taking advantage of digital avenues to do their banking business. Every year, more customers prefer online and mobile banking over going into branches, observers say.

As Jim Adkins, founder and managing member of bank consultancy Artisan Advisors, put it to SNL recently: "Every week fewer people walk into the typical branch."

At Webster, for instance, executives told investors during an earnings call this month that, in 2013, transactions at branches were down 11%.

"Our active mobile customer base has increased by over 40%" over the past year, "and now represents 23% of our consumer deposit households," James Smith, chairman and CEO, said. 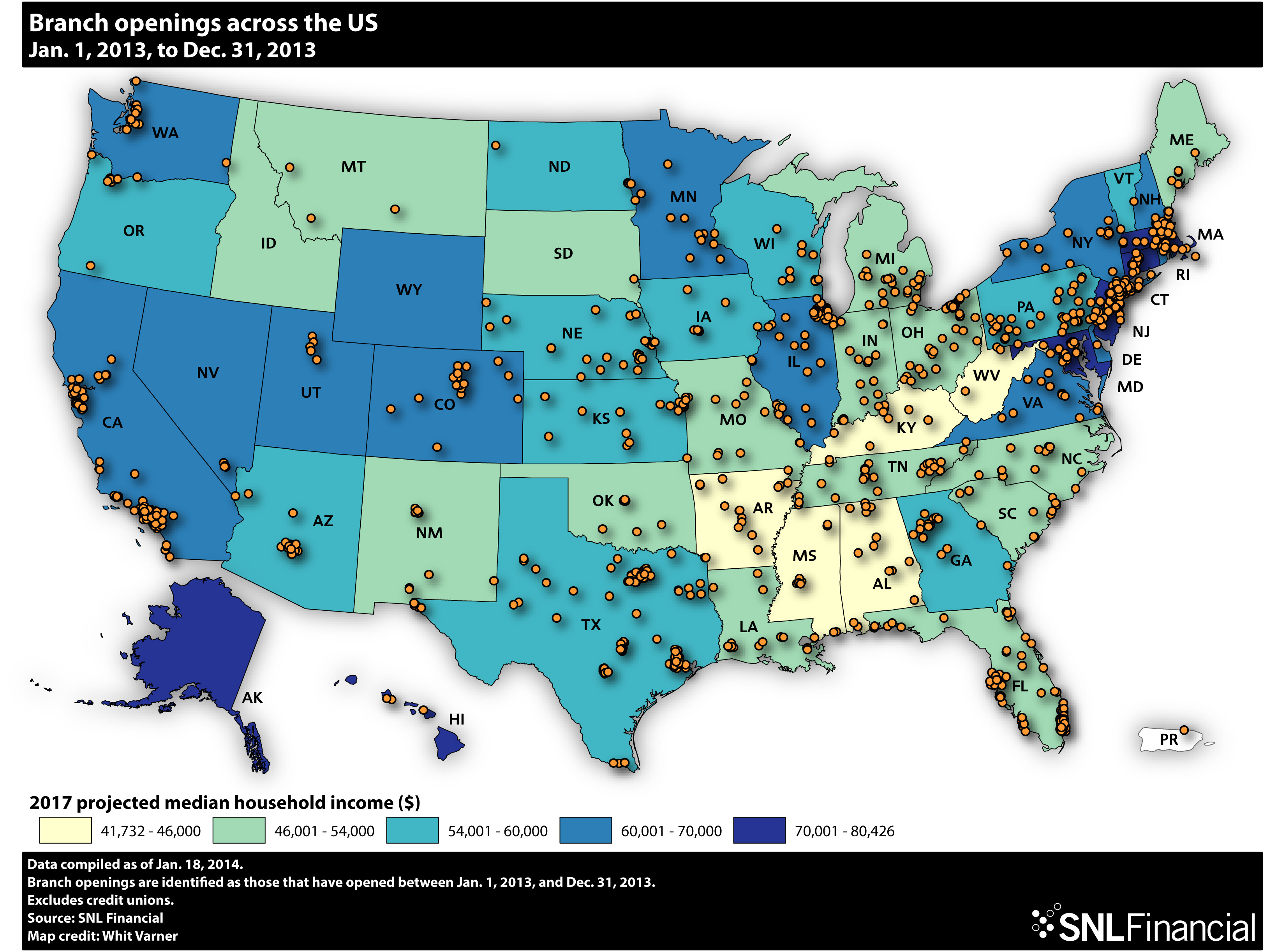 Mergers and acquisitions also play a role in branch reductions. Banks often consolidate branches with overlapping territories after closing deals to save costs. And many industry observers anticipate that M&A will pick up in 2014, particularly among community banks.

Smaller banks are wrestling with lofty compliance costs, slow loan growth, and tough competition from larger banks, leading many analysts to believe that more of these lenders will look to sell this year.

"I think the pace picks up significantly," Mark Fitzgibbon, director of research at Sandler O'Neill and Partners LP, told SNL.

In terms of geography, the greatest levels of reductions were in some of the most populous metropolitan regions in the country: Philadelphia, Chicago, and New York City.

The Los Angeles area bucked that trend, with branch totals rising in 2013. 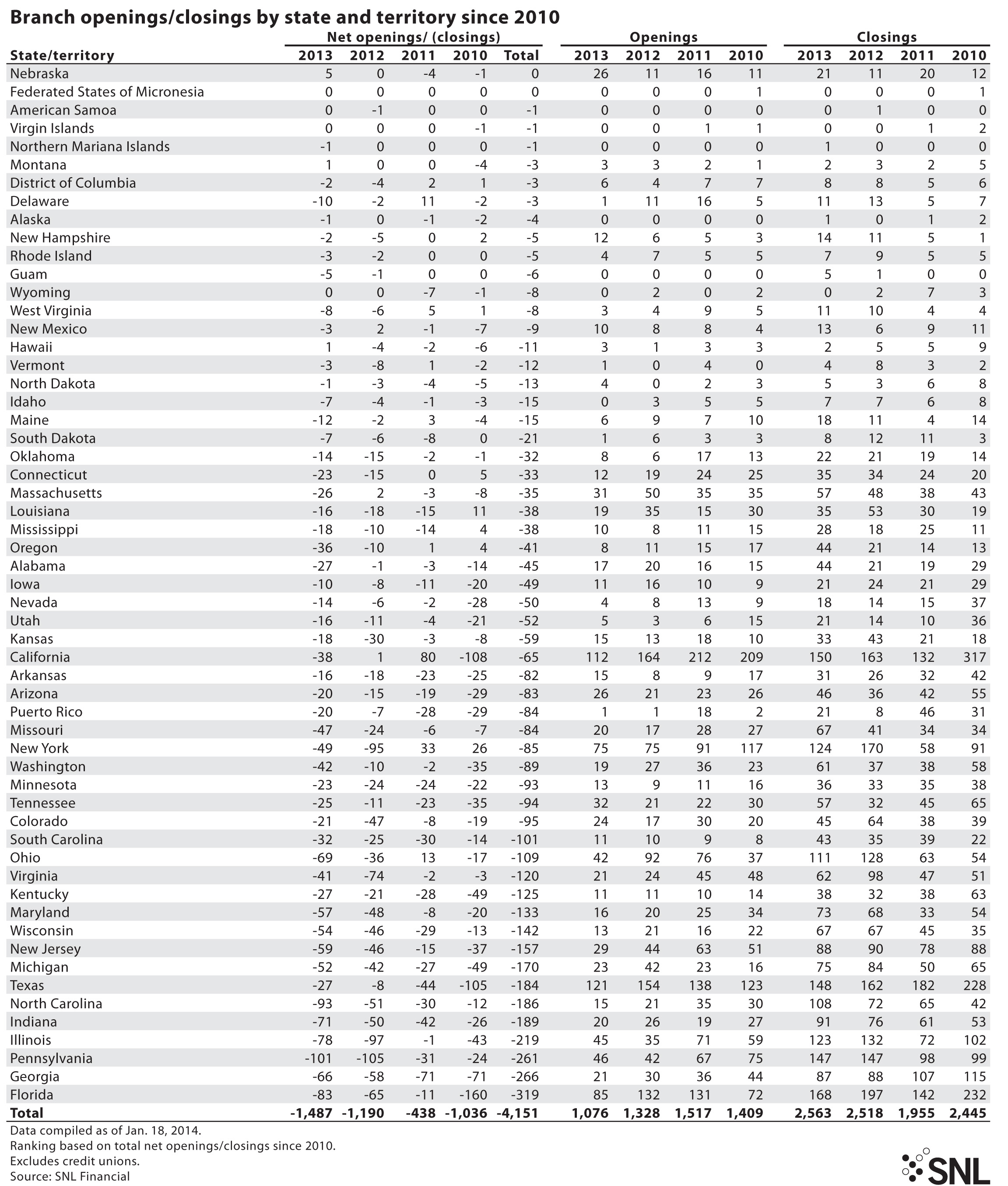