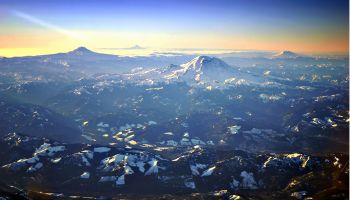 Puget Sound Bank capitalized on an acquisition it closed in mid-2013 and pushed hard for new business over the course of last year, helping it produce strong long growth.

The Bellevue, Wash.-based bank finished the fourth quarter of 2013 with $275.4 million in gross loans and leases, up nearly 8% from the third quarter and up nearly 28% from a year earlier. In June of last year, it acquired Core Business Bank, which also was based in Bellevue, and it built off that deal to fuel a heavy emphasis on commercial-and-industrial lending. Puget Sound Bank's C&I loans—including loans acquired from Core Business Bank—accounted for two-thirds of the bank's portfolio. Puget Sound Bank reported net income of $2.2 million for 2013, up from $1.9 million the previous year.

Just under $340 million in assets, Puget Sound Bank is relatively small, but it nevertheless embodies what analysts say is working on the growth front in the Pacific Northwest: deals and commercial lending in Greater Seattle.

Across Washington and Oregon, banks headquartered in the states produced only modest loan growth in the fourth quarter and last year. They generated median quarter-over-quarter growth of 1.32% and year-over-year growth of 4.07%, an SNL analysis found.

But Rulis and others said paydowns were relatively high late last year at many banks in the Pacific Northwest, the result in part of typical fourth-quarter clean-up work by commercial clients. That helped to mute decent origination activity that analysts anticipate will continue early this year and perhaps accelerate in the second half of the year.

"Anecdotally, production and pipelines seem pretty healthy," Rulis said. Overall loan growth last year "was hardly fantastic," but color provided by bankers during the latest earnings season "came with a positive tone" on originations. Loan demand, particularly on the commercial side, appears to be gaining some momentum.

While this is particularly evident in Seattle, Portland, Ore., also is beginning to gain some steam, analysts say.

Considering that paydowns trimmed that figure, it represents decent growth, analysts said. Nevertheless, growth is hardly robust. And given that is the case, Rulis said he is eyeing banks that have recently completed deals or that have acquisitions in the works because M&A helps to juice growth at a time when organic expansion remains difficult to propel.

Seattle-based HomeStreet Bank is a case in point. It completed a pair of open-bank deals in 2013 and it produced double-digit loan growth last year. It was among the fastest-growing lenders in the Pacific Northwest in 2013.

Among companies based in Oregon, all eyes are on Umpqua Holdings Corp.

The Portland, Ore.-based bank plans to close in the first half of this year the acquisition of Sterling Financial Corp. The $2 billion deal will roughly double Umpqua's size, creating a bank with about $22 billion in assets. Umpqua will expand in Oregon by more than 50 branches and by more than 80 in Washington. It will pick up another 16 in California.

Umpqua had a strong 2013, capitalizing on activity across the Northwest, including in Portland. The company grew lending by 10% last year, Umpqua President and CEO Raymond Davis told analysts on the company's recent fourth-quarter earnings call. But he said the year ahead promises to transform the company and position it for even stronger growth in coming years.

"We recognize the scope of this transaction and have devoted significant resources to planning every effort of the integration process following the close to ensure that we are successful," he said.

Brett Rabatin, an analyst at Sterne Agee & Leach Inc., agreed that deal-makers are worthy of extra attention this year.

But he told SNL the story of 2014 could ultimately center around organic growth. He echoed Rulis in saying that paydowns offset decent origination levels in the Pacific Northwest last year. If the region turns a corner and paydowns taper off while originations continue to advance, banks could produce more substantial organic growth in coming quarters.

Rabatin said this will be dependent in part on the national economy. He said businesses in Washington and Oregon tend to follow the lead of their counterparts nationally, and because of this, the Pacific Northwest tends to lag the rest of the country coming out of recessions. And, despite being removed from the depths of the last recession by a few years, the region is still to a degree recovering.

He said Seattle is notably strong and Portland is rebounding, but neither is surging on the level of hot markets on the West Coast such as San Francisco and Silicon Valley. So there remains plenty of room for greater growth in the Pacific Northwest's largest metros, he said.

"Right now, I think everybody has a bit of a wait-and-see approach this year in terms of whether we have decent growth," Rabatin said of both the economy and lenders' loan books. "There is potential, though."