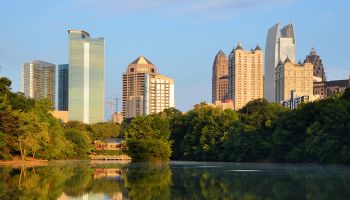 While Atlanta has risen from the depths of the crisis, growth remains hard to come by for many banks in the market, prompting more M&A conversations.

Few metro areas experienced as much stress as Atlanta, where many banks failed during the credit crisis, but the market is finally showing signs of light. Matthew Veneri, a principal at Atlanta-based FIG Partners, said that the market remains a tale of two cities. The northern and northeastern parts of metro Atlanta are recovering, while the southern and southwestern areas continue to struggle.

"Real estate prices seem to have bottomed. In some markets, we actually have new construction, ‘spec’ homes being built," Veneri told SNL. "I think from that perspective, it's definitely turned the corner. But it's not all the way around it."

Numbers behind the improving trend 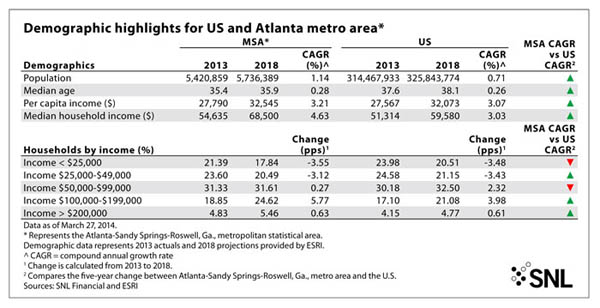 Residential real estate prices in metro Atlanta actually fell for five straight years from 2008 to 2012, according to the Federal Housing Finance Agency. Exposure to real estate, particularly in the form of construction and development loans, helped claim many banks in the area, with roughly two-thirds of the 88 failures in Georgia this cycle occurring in counties located within the Atlanta-Sandy Springs-Roswell MSA.

There are far fewer sick banks in metro Atlanta today, as evidenced by the declining numbers of banks with Texas ratios above 100%, a widely considered threshold at which banks tend to fail. Residential real estate prices have rebounded in each of the last three quarters as well and closed 2013 up a little more than 7% from a year earlier.

Sales activity has also increased in Atlanta. Compass Point analyst Kevin Barker noted in a report in late March that average apartment sales volume in Atlanta through year-end 2013 increased 19% from year-ago levels, compared to an 8.9% increase at the national level during the same time period. Rent growth in Atlanta also exceeded the national average after lagging for two years, the analyst said.

Very few properties are still selling in south Atlanta, they say, but product is now moving in select markets within the "platinum" triangle in north and northeast Atlanta and in Alpharetta and Marietta, Georgia. Walt Moeling, a senior counsel in the Atlanta office at Bryan Cave LLP, said that construction activity is occurring in better growth markets in metro Atlanta and old inventory, particularly within the city limits, is moving "nicely."

"Condos that were $140,000 when they were built are now going for $70,000 and everybody today is happy to sell them at $70,000 because they probably bought at $50,000, at the bottom," Moeling told SNL. "You no longer drive by and see crane after crane after crane. But clearly a rational amount of building activity is coming along."

Development activity and real estate buyers moving into the market have given banks a few wins. For instance, Bank of the Ozarks Inc. just recently closed a $41.5 million loan to SoTHERLY Hotels Inc. to aid in its $61.0 million purchase of Georgian Terrace Hotel. SoTHERLY, which called upside in the market "tremendous," said in a release announcing the deal that the loan was collateralized by a first mortgage on the property. The loan carries a floating interest rate of the three-month LIBOR rate plus 3.75%, with a 4.00% interest rate floor, and amortizes on a 25-year schedule following a 12-month interest-only period.

Those deals certainly are not the norm for most banks, especially smaller community banks. Some other institutions such United Community Banks Inc. have said that Atlanta represents its best growth market, but advisers said that organic growth for most institutions in Atlanta remains quite slow.

"If you talk to any banker in town, loan growth and opportunity is still relatively limited. It's out there, it's competitive and it's at terms that some of these guys don't want to play at," Veneri said.

That limited growth, coupled with a challenging interest rate and regulatory environment, is causing banks to consider partnering with other institutions. Even banks that still remain bruised from the downturn have become more willing sellers and possibly at prices that buyers could consider reasonable. 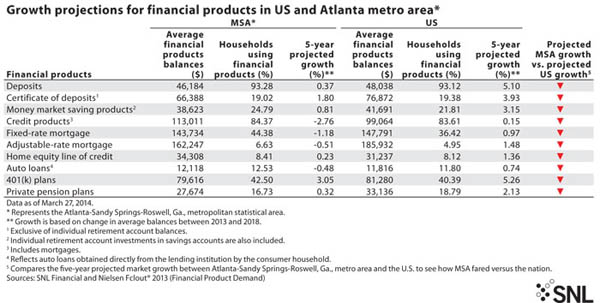 “We're seeing a lot of talk. Everybody is talking to everybody," Moeling said. "We're back to a double handful of bona fide zombies but even they're talking to people. ‘Just take it. We don't necessarily want anything’."

FIG Partners' Veneri agreed that many M&A conversations are currently occurring. He said that many private banks are struggling to grow and their investors simply are looking for liquidity after holding their money in the institutions longer than they ever expected.

Veneri recently worked on a deal where liquidity played a role in the target's decision to sell, advising Community & Southern Holdings Inc. on its purchase of privately held Verity Capital Group. Verity CEO John Lewis told SNL shortly after the deal that the tough growth and competitive environment encouraged the bank to join forces with a larger institution. He further said at the time that the deal offered Verity's stakeholders desired liquidity.

However, that could change soon and more deals could arise in the metro area. Veneri noted that Atlanta is home to many cash-laden buyers that were active acquirers of failed banks. Now that bank failures have slowed considerably, those institutions are looking for ways to deploy excess capital.

State Bank Financial Corp. is one of those institutions and is focused primarily on acquisitions in metro Atlanta. "We certainly see opportunities, we're seriously exploring and we're committing some significant resources too," State Bank Chairman and CEO Joseph Evans said on the company's first-quarter earnings conference call.

State Bank is not alone in its pursuit. Veneri said that a number of institutions with excess capital are actively knocking on doors and meeting with other banks about potential transactions.

"I think you'll see in the second half of this year … a lot more activity in and around the Atlanta MSA from a sales standpoint, just because the community banks have gotten back to stable footing and have come to the realization that in a market like this, [for] the $200 million to $300 million bank—because of the added cost and the added competition and the limited organic opportunities—the only way to grow or maximize shareholder value is to seek a partnership," Veneri said.